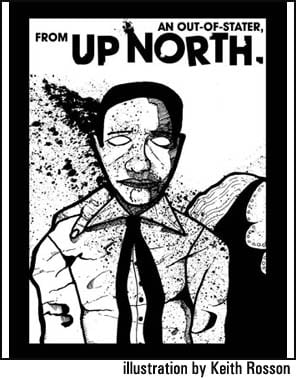 In Razorcake # 28, filmmaker Keith Beauchamp discussed his investigation of the murder of Emmett Till. A black teenager from Chicago, Till was brutally slain in Mississippi in 1955 for whistling at a white woman named Carolyn Bryant. An all-white jury acquitted Bryant’s husband Roy and her brother-in-law J.W. Milam of murder, but the two men later admitted that they had killed young Emmett. Both men died years later without paying for their crimes, but anger about the case helped fuel the civil rights movement.

More than four decades after the murder, Beauchamp found new evidence pointing to other suspects, some of whom are still alive. In particular, eyewitnesses informed Beauchamp that Carolyn Bryant was in the truck with Roy Bryant and J.W. Milam when they abducted Till from his great-uncle’s home.

The FBI and local prosecutors in Mississippi re-opened the case in 2004. In 2006, the FBI turned its report over to the local district attorney, Joyce Chiles, and recommended that she focus her investigation on Carolyn Bryant (now going by her new husband’s last name, Donham). Changes in Mississippi since 1955 raised hopes that Emmett’s surviving killers would finally be punished: Joyce Chiles is the first African-American D.A. in that jurisdiction.

On February 27, however, court-released documents showed that a grand jury had refused to pass a “true bill”—a formal indictment—against Donham on the charge of manslaughter. District Attorney Chiles told the press that the grand jury’s decision effectively closes the case.

Beauchamp was appalled by the news. “I will say this until I die, man: We have enough evidence against that woman. The FBI did a spectacular job on this case.” The decision devastated eyewitnesses who told their stories to the filmmaker and federal investigators. “Witnesses were in tears,” Beauchamp stated.

D.A. Chiles made a bizarre statement to the press after the grand jury announcement. “If I were to follow the law and the evidence as it was presented, I would have had to have returned a no bill,” she said. It is extremely unusual for a prosecutor to bring charges against someone and later say that it would have been wrong to indict the suspect.

Other questions center on Henry Lee Loggins, a black man who worked for J.W. Milam. Beauchamp claims that Loggins was forced to assist Till’s murderers, citing FBI documents and investigative reports from the time of the killing. In a filmed interview with Beauchamp, Loggins described Till’s death in great detail, but stated that he was merely repeating what he had heard. Many observers hoped that Loggins would prove an important prosecution witness.

It is unclear to what extent the district attorney pursued that lead, and a Mississippi newspaper recently reported that the story of Loggins’s involvement was a “legend.” However, in the summer of 2005, Loggins’s son Johnny Thomas made statements to a number of newspapers that supported Beauchamp’s claims. Thomas was an infant at the time of the Till murder and his father moved north shortly thereafter, leaving his family behind. “The only way he would leave Mississippi was if he was run out,” Thomas explained. He added that he keeps in touch with his father and offered a strikingly vivid account of Till’s murder and Loggins’s role in it.

Thomas said that his father accompanied Milam and Bryant when they abducted Emmett from his great-uncle’s home. Later that night, according to Thomas, the white men forced Loggins to watch while they beat Till: “He couldn’t stand the screaming and eventually tried to run off. But Milam shot at him, and sent a shot just over my daddy’s head. He turned around and went back.” Thomas also mentioned that he had talked to the district attorney about his father. “Joyce Chiles told me he lied (about not being involved),” he remarked. Reports such as these raise serious questions about the current desire of the district attorney and grand jury to shut down the investigation.

It would be easier to dismiss such concerns if not for indications that a climate of fear still reigns in that part of rural Mississippi. Many eyewitnesses were reluctant to talk to investigators. Beauchamp reported that it took him years to persuade some Till family members to go on the record. Ruthie Mae Crawford, a key witness, insisted that her face not be shown on camera.

Beauchamp’s documentary, The Untold Story of Emmett Louis Till, is out on DVD, but the filmmaker held back some evidence—including the names of some surviving suspects—in order to avoid undermining the case. Why doesn’t he simply go public with all the information? “It’s still an investigation,” Beauchamp answered. After noting that prosecutors could call another grand jury in the case, he added: “I’d talk to the world if I could,” but “if there’s any opportunity to get this into court, it would be wrong for me to go out and say everything.”

Beauchamp’s next step will be to consult members of Congress who helped him get the Till case re-opened three years ago. “I’m going to be in touch with Senator (Charles) Schumer (D., N.Y.) and Congressman (Charles) Rangel (D., N.Y.). I don’t know if they’ll be willing to move forward, but I’ll find someone who will.” He noted that a congressional report might disclose enough evidence to re-start the investigation without releasing so much information that the case is compromised.

In the meantime, the filmmaker does not intend to give up: “My gut feeling says this isn’t over.”