I had the extreme fortune to go to Japan for work last month, and after work-related events finished up I took myself off to Tokyo for a bit of sightseeing.

I wanted to see a lot of music while I was there because, although I don’t actually know very many Japanese bands, the ones that I do know are super excellent. I looked online for some info about shows prior to leaving the U.S. and planned to go to a show on my first full day of vacation in Tokyo; however, by the time my friend and I got over to the venue, the last band was almost finished. This was around 10 pm or thereabouts. So! First lesson about shows in Tokyo—they apparently start mostly on time, and sakes alive, they start early! Contrary to the punk rock time I am used to, when it says 7 pm on the website, they really mean 7 pm!

Next lesson about shows in Tokyo—they are expensive! I had read on numerous sites about a couple of specific venues to see punk shows at—Anti-Knock and Earthdom. My friend and I went twice to Anti-Knock—once when we arrived too late (as mentioned above), and once when we were just trying to see if there was anything interesting going on, and both shows were about 2,000 Japanese Yen, which is almost twenty-five U.S. dollars. Holy smokes! That is definitely more expensive than I am used to, particularly for a couple of local bands, not a big act or something. And the same prices seemed to be common at Earthdom (although one of the shows had about seven bands, which is actually too many for my liking but at least makes twenty-five dollars a little easier to swallow). We later learned from some locals that the reason the shows are so expensive at those types of venues is because the equipment is apparently of a very high quality. Something like that. 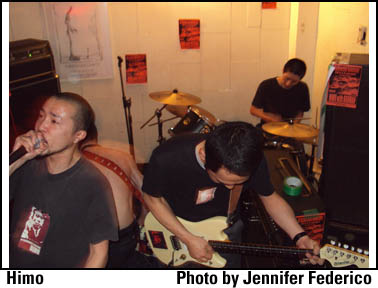 Luckily though, somewhere along the line—it may have been at the really great record store Base Records (Japanese: http://www.recordshopbase.com/ or English: http://www.myspace.com/recordshopbase)—I picked up a flyer for a band called Himo that was playing a show with another band called Dudman for only 500 Yen. Now we’re talking! It also said at the top of the flyer, “Kitashinjuku Hardcore.” Okay. I checked Himo out online (http://www.myspace.com/himoxxxxxxxx/music) and they sounded pretty spastic. Very good. My friend and I decided to go check it out.

They were playing at a place called Studio Telecom (http://www.studiotelecom.net/), , which is actually a music studio (practice space and perhaps recording) rather than a bar or club. It took a little effort to track it down, because we could only find the address in Japanese, but we finally worked it out, and with my friend’s excellent navigation we walked over from our hotel in Shinjuku, arriving almost exactly at 7 pm. So on time!

When we got there, there were about ten guys sitting in a small room smoking and talking. I felt a little shy, because I only know about three Japanese words and could therefore not offer much in the way of conversation, but, despite this, they were very warm and offered us some beers and snacks, without taking any money for either. So generous!

They had some T-shirts and CDs and patches for sale. The bassist from Dudman gave us free lighters (and later free shirts!) and one of the guys from Himo gave us some cool stickers. At one point, one of the guys pulled out a CD and I could see from a few seats away that it was a Himo / John Doe split. Earlier in the week, when I’d been searching for info about this show, I’d come across the band John Doe (not to be confused with the legendary John Doe from the Los Angeles band X), listened to them online (http://www.myspace.com/souingyokusaiseyo) and fell for them instantly. More frantic hardcore with some crazy unintelligible ranting. Would it be more “telligible” if I understood Japanese? Perhaps, but I tend to think not.

Anyway, I liked it and I was excited that the guy at Studio Telecom was holding the split with Himo, which I gathered was not yet released. I tried to convey that I’d heard John Doe and was really interested in purchasing the CD, and money did eventually change hands (which was great), but I hope I did not seem greedy or that I somehow purchased his personal copy! That was certainly not my intent and I am still a bit concerned about it.

Shortly after this, people began to leave the room and head downstairs, which is where the bands would play. There was a tiny little room and about a dozen of us, including the band, piled into it.
I had not actually listened to Dudman prior to them playing, and was really happy when they got into it. Very fast, short songs in just the kind of hardcore style I like. No bullshit melodic bits (that I could tell, anyway) that, for me, tend to sometimes weaken things up too much, or make things too pretty when I want fury, just a rampage of excellent hardcore. And it was so fun to watch them in such an intimate setting; it was almost like watching them practice (but without having to listen to all the repetition and fuck-ups that come with writing a new song). I really liked them!

Upon returning home and poking around about them a bit, I learned that they used to have an American guy singing for them, but their current singer, Yusuke Adachin, is the ex-World Downfall singer. I checked in with him and he said that Dudman does have a website, but it is in Japanese, so if anyone cares to get in touch with them about anything, you can email Yusuke directly at [email protected] (there is some info in English about them here, though: http://rcptapes.blogspot.com/, and you may be able to get their latest release if you inquire).

So they were really tight and good. When they finished, we all tromped back upstairs and I accidentally locked myself in the bathroom for awhile. Afterwards, more beer and a bit more extended conversation—I think it was at that point that I met Shingo Maeda, who runs an online store (and does a newsletter) for Too Circle Records (http://www005.upp.so-net.ne.jp/toocircle/). He is also in the band Encroached (http://www.myspace.com/encroachedtokyo), who also sound insane (in a most pleasing way!).Shingo speaks great English and was really nice and we chatted about bands. He also explained that it was cheaper to try to see bands at studio spaces and suggested another one called Rinky Dink Studio—maybe if I find myself in Japan again sometime I will have a chance to check it out!

After not too long we went back downstairs and Himo started. Also great hardcore but with even shorter songs then Dudman, and more disjointed in style. At times throughout both sets I was reminded of Los Crudos a little—not just because of the speed but also the frenzied singing. Again, really, really fun! Seriously. I was psyched.

When they were through we went back upstairs and, lo and behold, there was a beautiful meal prepared! Some of the people who had come (there were more by then, but still probably not more than twenty, tops) had brought food to make and others pitched in cash. While Himo was playing, a guy from the studio (I think!) had set up cookers (kind of like big fondue pots) on the two tables and began making a lovely soup with some greens and noodles. I did not originally partake because I’m veggie and it had lots of meat stuff in it, but towards the end they put in tofu and I ate that (although I suppose that was some leftover meat broth) and it was quite tasty! Regardless of the taste, though, my friend and I thought it was sooooo cool that this was all set up—it was very cooperative and sharing… kind of like a pot luck but waiting for you after a fucking excellent show rather than at a picnic or something. It was so great! And from a practical standpoint, it may have also made sense because the show started early and that potentially puts off dinner until later.

While everyone was eating, I had a really good time talking with Yusuke Adachin and Mikuni (drummer from Dudman) about Japanese punk and some other stuff. They gave me some suggestions about Japanese bands to check out and I definitely will do so. I also talked with some of the others there and everyone was really friendly. Although I had felt shy when we first arrived, by the end of the evening I was happily exchanging barbs with Himo’s singer (New Jersey not only produced Bon Jovi but also Endeavor!) and inviting everyone to come to California. Himo said they may actually do a tour in the U.S. sometime soon-ish so I will definitely be on the lookout!

Domo arigato to everyone at Studio Telecom for making us feel so welcome and for all the great music!