At the end of three days of proto-punk, garage, garage-punk and miscellaneous gambling adventures, a good chunk of the crowd at the Vegas Rockaround had gone home or to bed by the time the Dragons played their farewell performance. Scheduled to hit the stage at 3:00 a.m. Monday morning, the band had yet to finish setting up by quarter after. Patience was wearing thin at this point, and fearing an epileptic seizure due to fatigue, I called it a day and went to bed.

It was an ignominous end to an otherwise kick-ass weekend, which saw brilliant performances from the likes of Hasil Adkins, the Seeds, Devil Doll, Muck & the Mires, and the Monks.

As with past Rockarounds, the Gold Coast casino provided the setting, complete with spinning roulette wheels, not-so-hot craps tables and all the free booze (when you could grab a waitress) you could drink. Many of us, knowing how expensive all that “free” booze could be, opted for the five-dollar six-packs of Guinness on sale at the gift shop. The actual scene was provided by go-go dancers on platforms with classic, psychedelic lights twisting and twirling in an otherwise dark ballroom.

The first night saw the lovely Devil Doll deliver half an hour of sexy punkabilly with a unique version of “Should I Stay or Should I Go?” as a closer. Devil Doll is a real pistol-full of sassy attitude who only broke character once to encourage everyone to go out and vote November 2nd.

Following her was an amazing set from the Reigning Sound. The Memphis trio’s musical sensibilities were reminiscent of a garage-y version of Husker Du. Lead vocalist/guitarist Greg Cartwright has a commanding presence not unlike Bob Mould in his prime. Just two bands in, the Rockaround was getting off to a good start.

The main draw of the first night however was the 5678s, the Japanese girl group that Quentin Tarrentino immortalized in Kill Bill. Sounding not a little bit like Shonen Knife meets the Shaggs, the 5678s were immensely entertaining… for about fifteen minutes. After that, the cuteness quotient wore thin and the craps tables began calling my name. Watching the rest of the band’s set, it goes without saying, wouldn’t have been nearly so expensive.

Sky Saxon and the Seeds, the other main draw of the night, were, like a lot of bands over the weekend, tardy in taking the stage. Scheduled at the ungodly hour of 1:45 A.M., they didn’t come on until close to 2:30, leaving even hardened fans looking for someplace to sit down or pass out. Sky, his face initially hid by a Mexican wrestling mask, was remarkably in control for someone with a reputation as an acid casualty. Their 1966 Top 40 hit “Pushin’ Too Hard” was a history lesson in pre-punk rock angst. Other songs like “Can’t Seem to Make You Mine” and the paranoid “No Escape” drew on the same cheesy campiness that the Cramps would perfect a decade later. 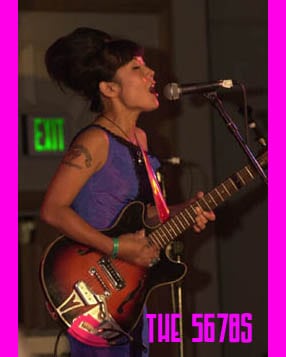 The second night began with decent sets from the Bobbyteens and the Orangutones, but it was the Boston quartet Muck & The Mires who set the pace for the evening. The Boston quartet – described by Steven Van Zandt in their PR as “like the Dave Clark Five without the sap” – proved in spades that fresh garage punk is still being mined without a hint of nostalgia. Lead singer Evan Shore, decked out in bug-eyed sunglasses was especially impressive as the band finished off their set with an unusually potent cover of the Knickerbockers’ garage classic, “Lies.”

Barrance Whitfield, the closest thing to garage R&B that the Rockaround offered, was being fawned over by my girlfriend as he rode the escalator to the show.

“Oh my God, what beautiful shoes,” she exclaimed, lifting the poor guy’s pant leg to get a better look at his red leather creepers. “You look amazing!”

“Yeah,” the dapper Whitfield replied modestly. “I’ve had these for fifteen years!”

Whitfield, sans his trademark turban, leaped on stage and was soon sweating profusely as he and his band the Savages pounded out grungy Detroit rock ‘n’ soul.

“Oh, shit,” my girlfriend said, embarrassed. “That’s the guy I was bothering on the escalator!” 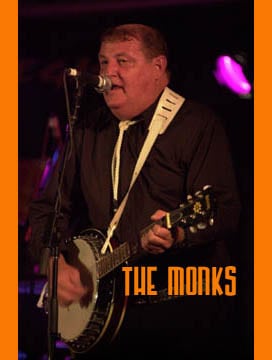 The most anticipated band of the entire weekend, the Monks, came on close to midnight. A footnote in the history of rock, the Monks were five American GIs stationed in Germany in the early ’60s who briefly rose, then crashed back down with hardly anyone noticing.

Decked out in robes and circular buzz cuts, they cut a single album, Black Monk Time, which took rock minimalism to a whole new level. They were uncharacteristically angry (for the time and place), eschewed conventional song arrangements, created cacophonous harmonies and feedback and left both their German hosts and fellow servicemen confused as to what they were trying to accomplish. In the process, they managed to help lay the foundation for the art punk revolution twenty years before Sonic Youth.

While they certainly didn’t really look like punks (youthful exuberance is, after all, physically hard to maintain after forty-some years), the Monks showed why their contribution mattered. Lead guitarist/vocalist Gary Burger may be older, but the energy he unleashed put to shame the cabaret antics of other angry old men his age (I’m looking at you, Pete Townshend).

The rest of the evening, for those who managed to stay awake, saw early morning sets from the Downliners Sect, the A-Bones and the always reliable Deke Dickerson.

As in years past, many attendees fled the ringing slots and blinding lights one day early to get home for work the next day (doesn’t anyone know how to call in “sick”convincingly?). That was a mistake as anyone who stuck around could testify. The third evening opened with kickass sets from San Diego’s mod mainstays the Loons and the amusing greaser punk antics of Deadbolt.

In terms of rock notoriety, few, if any, of the Rockaround’s performers could match the cadaverous figure of Kim Fowley – California’s closest thing to its own Malcolm McLaren. Fowley, who was brought in to act as an unofficial MC, has a resume that could only be described as expansive. He was the master of ceremonies for Los Angeles’ earliest Love-In’s; he proclaimed himself the Mayor of Sunset Strip before surrendering it to his friend, DJ Rodney Bingenheimer; he is co-writer of some of rock’s most maddeningly memorable chestnuts like “Alley Oop”; he is the co-writer/producer of songs by KISS, Frank Zappa, Gene Vincent, the Byrds, Gram Parsons, Cat Stevens, Helen Reddy, Slade, and Alice Cooper to name a precious few; and perhaps most famously, he is known as the lecherous old man who put together the Runaways when they still qualified as jail bait.

Surely, Fowley deserves his esteemed place in the rock pantheon. And if the perpetual scowl he has permanently plastered on his weathered face is any indication, he is also the personification of the bitterness inherent on those in the musical world who somehow never got their financial due.

Fowley nonetheless commanded attention as he strolled, bored, throughout the ballroom, entertaining the curious with tales of rock debauchery as he scanned the crowd looking for his next conquest. Maybe he took the stage on other occasions, but the only time I saw him up there was when he introduced Rudy Ray “Dolemite” Moore, who in turn, introduced Hasil Adkins. 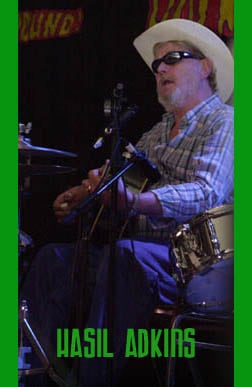 Adkins, profiled a couple months ago in a two-part Razorcake interview by Bradley Williams, was nothing like the slightly crazed rockabilly cat I expected. As he sat down behind a drum set, guitar in hand, he struck me as someone who knew both the value of a word-of-mouth image and more importantly the value of a good performance. Recent pictures made him look like an aging version of the Supersuckers’ lead guitarist Ron Heathman. Maybe he put on some weight since his interview, but I was struck by how healthy the guy looked and sounded. Again, I was expecting another casualty of hard living, but his set quickly moved beyond simple competency to that of an electrifying solo artist who had wrongly been overlooked by rock historians.

Regrettably, Adkins would be the last performer whose act I’d catch in its entirety. I was looking forward to the farewell performance of the Dragons but when they failed to come on half an hour after their scheduled time (three-fucking-thirty for Christ’s sake!), I retired to my room, ears ringing, and wallet screaming for mercy.

Fat on the Vine: By Crazy Carl Robinson, 282 pgs. By Adrian