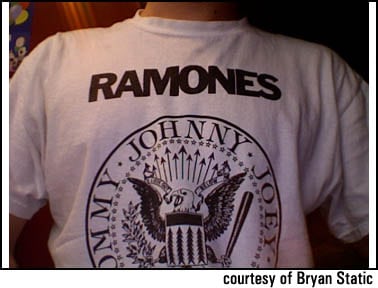 Doesn't It Get Cold out Here?: Bryan Static's Fifth Column

Back in middle school I was a depressed little kid. Not the bad kind of depressed, the fun kind of depressed where I was angry and cynical only when adults were looking, but when their backs were turned I became the poster child for the overly happy brigade. To complete my ruse, my entire wardrobe consisted of black T-shirts with the appropriate pants that had holes every five inches to make me look like a vagabond with strong antisocial tendencies. The black T-shirt in no way actually represented how I felt, but only how I wanted others to see me. Colors lie. The fact that my eyes naturally come with black underlining just made the whole charade easier.

As my demeanor changed, so did my clothes. I stopped purchasing black shirts in favor of more lively colors like feces brown and fungus green. When I actually started going out of my way for non-black T-shirts, I began to notice the absence of them. Black—though while technically not a color—is a favorite um… shade-that-does-not-reflect-light of a lot of people.

At concerts, the merch tables almost exclusively carried black shirts. The black concert T-shirt is such a cliché now that the only way I could properly describe how cliché it is would be to use another cliché. Thank god punk bands tour too much to put the tour dates on the back of every shirt.

Honestly, I don't mind dressing in black, but it's almost like it's the only option for kids who like to wear nothing but band shirts. Now this problem could be easily solved if I just went to a store and bought a bunch of blank shirts of assorted colors and just stopped doing the whole band shirt thing, but if I did that, how else would anyone know that I like Hot Water Music? Certainly not by looking at my record collection. Very few people have earned that privilege.

I understand, from an appearance perspective, if you’re a dirty slob, then black T-shirts won’t show your sweat, blood, and piss stains and colors like white will, but if that’s your main reason for wearing black shirts, perhaps you should invest in a good bib.

Something occurs to me as I write this. When I was in middle school, the goth population declared that black clothing was nonconformist. However, priests, puritans, and the Amish all dress in black. (Bryan: 1, Boring Depressed People: 0.) It’s not like a single color can be nonconformist. Every color humans can see was set in our brains thousands of years ago. If you can find a shirt of one color that truly shocks the minds of people around you, then I will be impressed.

So bands, I beg of you, don’t sell shirts of just one shade. Have some variety! I’m not saying you have to print rainbow-colored shirts or anything like that, but some of us prefer to have more than a monochrome assortment of clothes to choose to wear everyday.

Write in for free, grammatically incorrect German poetry at [email protected]. If you can name the two J Church references in this column (not including the title), I will send you two poems!