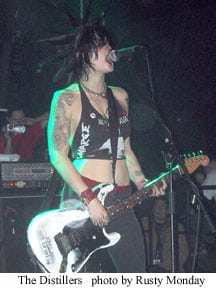 Distillers, The, Final Conflict at Sox, Deadbolt at Wild at Heart: A Bean in Berlin, Germany, 12/15/01 By Kristen K

We arrived at the show just before the start of The Distillers set with just enough time to grab a lukewarm Beck's and force our way through a bunch of rowdy drunken German skinheads. It was an ugly crowd. I was already nervous because the night before I had met a displaced black musician from New York, who aside from being very excited to speak to some Americans about the war and 9/11 tragedy, had warned us about nazi skinheads. He told us how he had been jumped four times by groups of skins, and that he had been spit on and called a nigger on more than one occasion. Armed with this information I thought the Final Conflict show looked more like a rally at Nuremberg. Heads turned as I walked in: a 6'1" Mexican with a blonde aryan babe and her hot persian girlfriend. Not understanding a word of German, I almost freaked out as I was approached by five different groups of skins. Yeah, I know not all skins are nazi troublemakers, but there was no way I could tell if they were complimenting my cool jacket or telling me they were gonna kick my ass. Regardless of what they were saying, I grunted, looked tough and forced my way to the front. 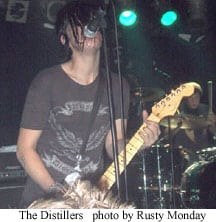 The Distillers set began with "Oh Serena," the first song on their debut album. This is the third time I have seen The Distillers and I am continually amazed by their show. Brody wasn't sporting her trademark mohawk, but had huge liberty spikes that would make GBH jealous. The original guitarist, Rose, is back with the band and her raucous energy and attitude added a lot to their live performance. Rose, who appears to be a non-white female, spat fearlessly at the skinhead audience. At first glance, The Distillers appear to be another US gutter punk band, but they are so much more with hook-filled songs and mature lyrics. Highlights included, "Red Carpet and Rebellion" and "Distilla Truant." They also previewed some of the new material featured on the upcoming album due out this year. I would list some of the new songs, but I had a few too many Beck's to remember the titles. Aside from the obvious language barrier, there was no huge difference between a general admission show here or in Berlin. A huge sweaty pit is universal. We left immediately after The Distillers to avoid any confrontations. 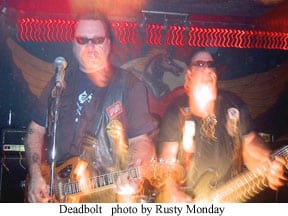 Ironically, Deadbolt was playing a couple blocks away at a club called Wild at Heart. Deadbolt, The Scariest Band In The World, are from San Diego. It was wild to come all the way to East Berlin and see old friends like Deadbolt. I dropped off my friend at this show before we went to see the Distillers, so he could hang out with Harley and the rest of the Deadbolt crew and get us on their guest list. Deadbolt is sort of a voodoo, surf, biker band. The band consists of Harley Davidson on voodoo guitar and vocals, R.A. Maclean on bass and vocals, 3rd Degree Burns on bass and vocals, and Clay Moore Mines on drums. Yes, that's right, two bass players. This band has an ultra heavy, groovy bottom end, with the surf guitar stylings of Harley Davidson. Deadbolt looks like a biker gang out of a Roger Cormon film, complete with leather vests, sideburns and dark shades. Harley is part Elvis and part Rodney Dangerfield. As part of his schtick, he would mumble fake German between songs as an unclear attempt to relate to the audience. Since we have seen Deadbolt on more than one occasion and both my friend and my band have shared the stage with them, we were familiar with their schtick. So in true Deadbolt fashion, we began to yell "ASSHOLE!" and Harley was quick to respond "Asshole, in America, means nice man." Deadbolt put on a great performance that could have been at the Garage in Silverlake and the Berliners gave a truly warm welcome for this great San Diego/faux-German band.

Later that night we made friends with a skinhead, who tried to assure us that not all skins are trouble. He explained that only about 10% of the skins were nazi racist skins. He also explained that about 30% were just political punks, and the rest were homos. Apparently, traditional skinhead attire is the chosen uniform for the gay community in Berlin. Now I really wonder what those skins at The Distillers show were saying!