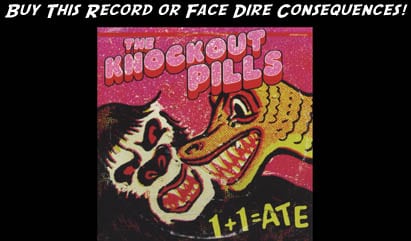 Discussing the Homoerotic Tendencies of Washed-up Rockers: An Interview with the Knockout Pills By Todd Taylor

Take the better parts of '60s rock and roll, like the Kinks or the Animals, remove the bubblegum trappings, add some testicles, up the ass-shaking quotient, filter it through twenty-some years of weirdo punk rock, bake it in the desert sun for thirty minutes, and BAM! You've got the Knockout Pills. Get their records immediately if not sooner.

Interview and pictures by Todd
Introduction by Josh

Todd: Travis. Acid?
Travis: Acid. Okay, so Grandma and Grandpa take off for two weeks and leave me in charge of the house with a two page fuckin' list. It's not a list of responsibilities or stuff I need to do, just a list of stuff I can not do, period. So, of course, me and my friend Kim, and Bob and Tamar decide we're going to take acid for two weeks straight and break every fuckin' rule, no matter what we've got to do. For the first week - I played in a band at the time - and those guys came over and we recorded our first demo over there. It's like a quiet, old person neighborhood, totally. That was a really bad thing to do.
Jason: The end.
Travis: Yeah... So, we do that. We're fuckin' taking acid every day and we end up having kooky-assed people coming over; Bentley's crowd, people who we were buying acid from. We built a fire in the fireplace. We didn't realize you had to open up the flue, so, of course, the whole house gets smoked out. They have this little terrier fuckin' dog that we lock in a room for a week. It's really obnoxious and it's harshing our positive mellow. "Dude, that dog's so negative. Put it in a room." It didn't help. There was shit over all of Grandpa's den. But we were good. We cleaned up the shit. This is probably one of the worst things I've ever done. So, we drink all of the alcohol in the fuckin' house. Fill it back up. We're taking food coloring and dripping it to make it look like scotch in a clear bottle. That ain't working. They've, never to this day, said a thing. So, no big deal. There's two days left and all we've done is taken acid every other day, the four of us. The house is a complete shambles. So, this girl I used to go out with, Kelly, this real nice southern belle girl in high school moved here from Louisiana. I broke up with her because Bob, the guy I was doing acid with, he was doin' her the same time I was and it wasn't really cool.
Todd: Literally, the same time?
Travis: No. We're getting to that. So our friend Kim goes, "Why don't you call up Kelly and have her clean up? She's so domesticated." We're like, "That's would be coldest thing possible to do." So after twenty minutes of not really trying that hard to talk us into it, we call her up. "Kelly, come on over. We haven't hung out in a while. Bob and I kinda want to make amends after that entire episode." Bob and I wanted to remain friends. I didn't care that much about her. She comes over. We're like, "We were hoping you could help us clean the house." And she's real fuckin' friendly and nice. "Oh, sure, I'll help you." She cleans the house while we sit on the back porch and smoke pot for two hours. Kim and Tamar take off for the afternoon. I go back inside and I'm in the kitchen fixing a sandwich and I hear Bob's voice down the hall. "Travis, dude, come back here." I'm all, "Uhh, all right." Sure enough, there's naked Kelly and Bob and they're having themselves a swell time and that's the end of the story, dude.... Ah, yeah, so we all enjoyed ourselves for the rest of the afternoon and we never saw Kelly again. Ever. So, that was one of the funner times I had on acid that I still have guilt about, but now I've purged myself of that. 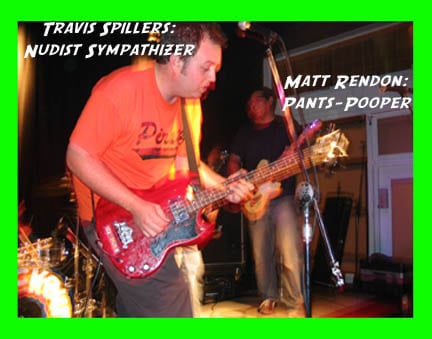 Jason: What's the "hung Grandpa story"?
Travis: I can do the "masturbation Grandpa story," which is a little bit better.
Jason: Sure.
Travis: So, I've been living with my grandfather for many months now. It's not been too bad because I usually crash at other people's houses, but I've been severely lacking in masturbatory enjoyment because, for some reason, I can't do it if he's anywhere even near the fuckin' house. I have this fear that even if he's out in the yard raking, he can hear me pumping away. He's all, "What's that? Pervert." And it' not like he's asexual. I don't want him masturbating in the house, either. He's seventy-nine years old. He has a problem with not knocking, too. I've been lying in bed with a stiffy poking up and a.) I sleep in the buff and b.) in the summertime, it's hot, so you don't have the blankets on and he'll knock on the door at eight o'clock in the morning and just open it, and be, all, "Phone!" And I'll be, "Fuck! Dude! Get away from my dick or talking or noise."
Jason: There was no pay off?
Travis: Then he came in to wake me up before we came to L.A. It's four thirty in the morning and I'd taken valium the night before and I was all aaunnnhgggghh. And I wake up to him opening the door. He's got a sweatshirt on and his tighty whiteys with his sack hanging down. "Time to get up." "Aaarrghh, not to that, dude. It's time to cover up."
Todd: Matt, tell me about the last time you had problems containing yourself.
Matt: The first couple of weeks in seventh grade in junior high, you know how kids are always making up myths? "Oh, if eighth graders catch you in the bathroom, man, they're going to give you a swirlie or they're going to beat you up." And I believed it. I was a year ahead, so I was eleven. I was terrified. I had lunch. It was pigs in a blanket or something that goes right through you. I had science class fourth period. I go in and I begin to feel it brew there. It was the first time I had to take a dump in school. So, I get excused, and I go to the bathroom and it's one of those bathrooms that looks like a boot camp bathroom. It's got four urinals, three toilets, no walls. I'm just, like, "Fuck." So I go over there and I take my pants down and you start hearing voices, you know, but you're not hearing voices, but voices in your head of eighth graders roaming around and footsteps, so I was, like, "I got it. I'll take a shit in the nurse's office. It's right down the hallway. No problem." So, I go scooting down there and about half way down, it was just one of those things. I had my knees together, trying desperately to get down to the nurse's office and I took a shit, right there, in my pants. And I finally got down to the nurse's office. Smelled up the place. And she had this look on her face: horror and repulsion and I could see she was a little chuckled by it. So I had to go in there, take my pants off, and we had to call my sister to come and get me. They put my crappy underwear and pants in a bag and sent me on my way.
Todd: Did they bring you a pair of pants?
Matt: Yeah, my sister brought me a pair of sweats. And I was excused. I could go home.
Todd: No psychiatric evaluation when you were sitting there?
Matt: None whatsoever, except, "Don't shit your pants." I was scared - initiation and all that stuff. 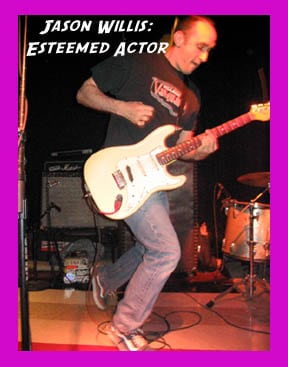