The setup was perfect: Two great bands, playing at what I can probably call one of my favorite PLACES, let alone venues. The bands for the night were also a somewhat eclectic bunch, but fitting for a club that’s hosted everyone from Fugazi to various ex-members of New Kids on the Block.

The first band of the evening was California’s Knights of the New Crusade, who already have a growing reputation. Their basis is similar to the Mummies: they play lo-fi garage rock, dress up in costumes, and make it their mission to piss you off, but there’s a difference. With the Mummies, you at least know that it’s a visual gag, but with the Knights, you actually wonder for a second (I’ve shown friends their website who hadn’t heard of them before, and left them really confused). It’s actually come to my attention since after the show that they include ex-members of the Phantom Surfers, or so I’ve heard, so that should give you an idea of what to expect.

Unfortunately for the Knights, they had some difficulties during their set, including breaking over a full set of guitar strings, a bass drum pedal, and a microphone, not to mention the sound was a little off at first (which was surprising, since I could hear their sound check beforehand, and it sounded great, even through the closed doors). Despite all of this, they still put on a great set with songs like “Whore of Babylon,” “‘E’ is for Evil,” “Ain’t No Monkeys in my Family Tree,” and “Sympathy for Jesus,” but they also did what they could to “spread their message.” There was talk of removing gambling (in the form of BINGO) from church, their disbelief in “evil-lution,” and a full-on fight with Satan himself, who apparently fights by throwing watermelons. Who would’ve thought?

The Dirtbombs were up next, who I’d been wanting to see live for a while, but hadn’t been able to make it before, for various reasons (including work, being away from home, and needing to write a thirty-page term paper the weekend before it was due), so I was looking forward to it.

People are often quick to dismiss the Dirtbombs, arguing that 1) they cover too many songs, and 2) their sound is a complete mess. First, if a band is going to put a few covers on their records, I’d rather it be by a band that may very well collectively own every LP in existence. Second, the two drums/two bass/guitar lineup SOUNDS like it shouldn’t actually work, but it does. Besides, if you heard them for the first time blindly, you’d be hard pressed to realize their unorthodox lineup. 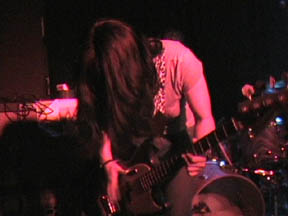 The set began with Mick playing a mostly solo number, which included doing that thing where he makes his guitar sounds like a record being scratched back and forth – like the guy from Rage Against the Machine, only making it sound a lot better. From there, the whole band just launched into their next song and went berserk.

See, that’s the cool thing about the Dirtbombs. When compared to many other bands, they just look INSANE. Every member is playing as hard as they can, yet each in their own way (Mick himself looked like a more rocked out Thelonious Monk), and it just completely engulfs you. The bulk of the songs were from their latest record If You Don’t Already Have a Look, a fifty-some song collection of their past singles. They played for a full hour, non-stop, with the exception of one guitar change due to busted strings. After a brief rest, they returned with a rare cover of “Tanzen Gehn” by Hubert Kah (presumably rare, because as Mick stated, “I really don’t know what I’m singing about since it’s in German”), and one more song which escalated into a good ten- to fifteen-minute jam, with everyone leaving the stage one by one, starting with Mick, and nearly ending, until everyone started RETURNING to the stage. This was definitely up there amongst some of the other great shows I’ve seen at Maxwell’s. 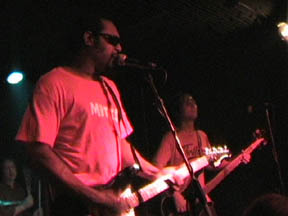 Gabby Gonzalez Photo Column – Los Crudos: I finally got to see them!