Dillinger Four, Hard Skin, Paint It Black, Fucked Up, and Mischief Brew: Live at the First Unitarian Church, 1/7/06 By Joe

Post-New Year's Eve is the worst part of the winter around the northeast. It's dark by five, the days are usually gloomy anyway, and let's face it - unless you're in elementary school, snow is fun for about ten minutes. Fortunately, you can usually find a few special occasions to help get through until the spring, so it was nice to make the trip down for the second day of the Holidays in the Slush fest. It WASN'T as nice being late getting down to Philadelphia, after "technical problems - with the door" on the bus ride, but I still had plenty of time to eat, head over, and wait as familiar faces began to show up.

Mischief Brew was opening up, and while they were probably the odd band out sound-wise, they sure set the attitude for the crowd. People were already dancing, and running around, which had me surprised, for the first band out of five. All in all, they struck me as a band I'd recommend to my friends who loved Flogging Molly and stuff like that.

As Fucked Up got ready to start, I'd realized that despite hearing tons about them, I hadn't even heard more than one of their songs. That only made it that much more interesting once they started, playing what I can only describe as a big wall of sound. At this point, people were going CRAZY, with pretty much the entire floor, well, going crazy. Apparently they'd already played two shows the night before, and were playing another one later that night, plus I thought I'd heard something about doing some radio show, too - now THAT'S Fucked Up (ahh, I kill me).

I've already mentioned how much I love Paint It Black, and have seen them a number of times now, but never in their hometown. I remember reading about how right before Minor Threat broke up; apparently one of big issues was how the rest of the band wanted to start playing weirder, artier stuff while Ian wanted to stay with the original sound. 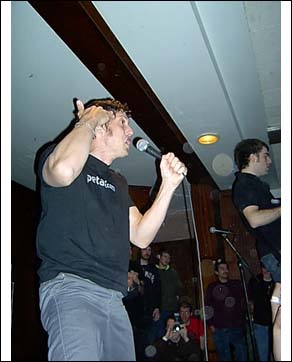 This came to mind as Paint It Black actually opened with "Ghosts," giving me the impression that if Minor Threat had actually come to some sort of middle-ground, that's what they would've been like. To quote Mike Erg, who was standing next to me, "Well, THAT was awesome."

Now, this was already a heck of a line up as it was, even without Hard Skin. To keep up the suspense, they cracked jokes on every other band there before starting their first song. Dan Yemin had already commented on just how wild everyone was going, especially with the barrage of stage divers, insisting they follow the proper, traditional etiquette for that sort of thing. I mention this because within the first notes of starting, the dude standing to my right tried to stage dive - from the floor - knocking me in the side of the head. 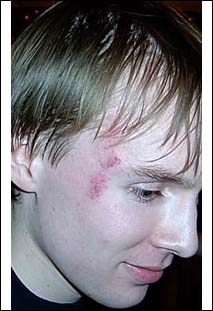 I went to the bathroom once I realized I was bleeding, and tried to listen the best I could while icing a fresh bruise. Apparently I missed the naked guy that came up onstage at some point. Long story short, Hard Skin is a joke skinhead band, they're funny, and people laugh at them and enjoy themselves.

So while the good news was that Dillinger Four was about to play their only area show of the year, apparently Paddy was sick - bad. Now, when I say bad, I mean "dude who by all means could probably take cannonball shots to his stomach (a la Homer Simpson while on tour with Hullabalooza) looked like he was about to die" bad. Like "dude who is probably used to playing shows inebriated completely out of his mind was actually struggling" bad. But the good news? It was still a set from Dillinger Four.

Between still having a headache, and just having seen them play the first night of the Fest not two months before, I'd decided to just take it easy and watch from the back of the room with a few other people. Granted at this point I was now tired, hungry, and bleeding from the head, but I'd be a liar if I said I wasn't thrilled when they started playing "Mosh for Jesus." It was a shame that Paddy was so sick, but it seemed like people were still excited. I wasn't timing it, but I think they only played for a half hour, with about three or four songs from each full length, plus "Holy Shit" by popular request.

They finally finished up, and announced that they wouldn't be able to play the later show they were planning on, but that Hard Skin was taking their place. It sounded like it would've been a really good time, had I not been busy missing my bus, and waiting two hours for the next one. 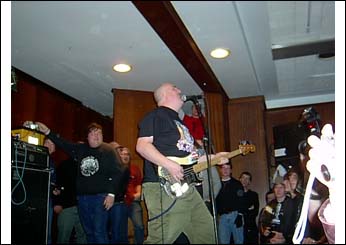