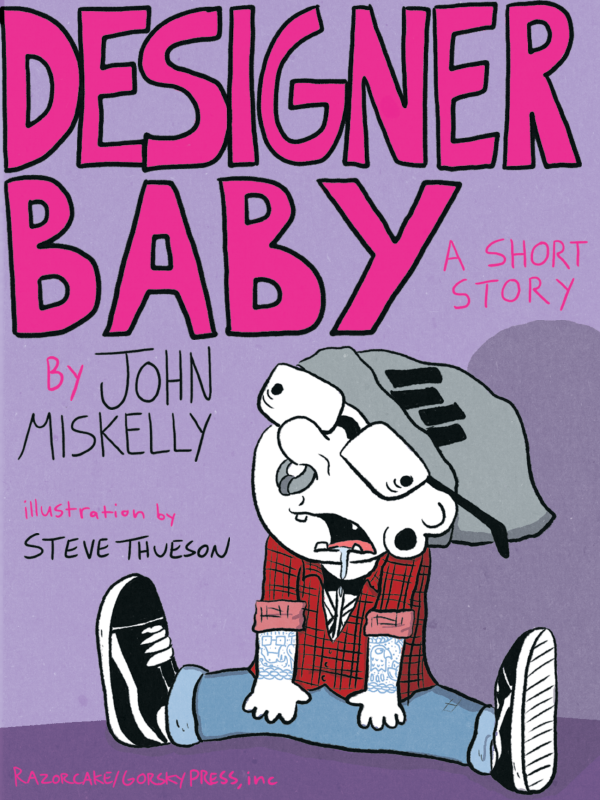 “Shall we go with Vans or Chucks?”

“I’m not sure babies really wear shoes, to be honest,” she says.

“But they look so cute, though, those tiny Vans, you see,” he says. “We could just buy a whole bunch in increasing sizes; then we’ll be prepared for when it does need shoes. Your mom said it was all about preparation, right? Shoes, clothes—they’re a necessity.”

She clasps her hands across her bump. “They do have some great color combos and we wouldn’t have to worry about shoes for ages. I mean, the classics aren’t exactly going anywhere, right?”

She thinks for a moment. “I think I read somewhere that Chucks are owned by Nike.”

“Well, in that case it’s Vans all the way. Plus, they have that SoCal edge, right? They’re just a bit more… I mean, we want him to have that late ‘80s/early ‘90s authenticity.”

“Well not grungy,” he interrupts. “That’ll be on its way out again soon.”

“Yeah, and also there’s a Vans store in the shopping center, right?”

“Opposite Starbucks, between the Apple store and that classy jewelry place.”

“Sweet! That’s decided then.” He pulls her closer to his side, dips his head, and addresses the bump. “We’re doing so well!” he says. “Hey, isn’t there a Sunglasses Hut in that place? I wonder if they do baby size Ray-Bans.”

“I was thinking yesterday: imagine the frames we could get him if he turns out to need glasses.”

“I mean, I really hope he doesn’t need glasses,” he says, earnest and wary.

He breaks eye contact. “But if he did need glasses…”

“There’re probably some awesome frames for babies. If he needed glasses, we could probably get him some nice ones.”

“Yeah. So I added a bit more to his Facebook page.”

“Yeah. You said it was kicking loads when we were playing The Cloud Nothings, so I added them to his music bit.”

“Our little mini-mosher!” She smiles and points at the profile picture. “Is that the scan from last week?”

“Look at all those likes!”

“Can you hear that?” she asks.

“Can you work out where it’s coming from?”

“It’s close by,” she says, checking inside her bag, in the glove compartment, and in the space between the gearbox and the seat. “Can’t you hear it?” she asks.

“I… I think so,” he says. “Now you mention it.” He’s grinning now like he knows something, looking at the road ahead, then at her, then back at the road in barely repressed infantile glee.

“Maybe it’s closer than you think,” he says, reaching across to the passenger seat and rubbing the bump.

She folds herself as far forward as her spine will allow.

He’s bouncing up and down now with all the vigor his seat belt will allow.

“It was the new guy—the new doctor, the Austrian guy—who checked you out last week. He installed it, a tiny speaker right up in there. It’s genius.”

“He… I wondered why you wanted to change…”

“I found him online. It’s all about immersion, he said. It’ll hear music all the time, not just from outside but from right in there—total immersion. It’ll have an ear for music right off the bat, it’ll be able to tune by ear, play by ear. He—or she—will walk into any band he—they—want. It’s a major head start; its taste will be way ahead of the other kids.”

He continues to grin like a kid at Christmas.

He waves a nonchalant hand. “Just some drugs or something; harmless. You were only out for a few minutes or so. I was there the whole time. It would have seemed like nothing to you.”

Again his line of sight flits between the road and her blank face, his smile diminishing slightly like a saddening balloon. “He calls it the Womb Room or something. Sonic Womb? I can’t remember exactly. I printed off the pages. I can show you when we get home. It’s totally a real thing. Womb Boom, maybe?”

“That sounds like a frat boy rape joke,” she says, looking out the window so he can no longer read her face.

“It’s not just music,” he proffers, touching her hand. “I had him load some audiobooks, too. There’s some Jane Austen on there, Gore Vidal, Emma Goldman—the whole political spectrum, from Bakunin to Michael Moore.”

She’s silent for moment. “I can’t help feeling a bit violated with a non-consensual iPod stuffed up me,” she says.

“I thought it’d be a nice surprise,” he says. “It being your birthday next week and whatnot.”

“It’s good that they hear music,” she says. “My mom never played music to me and I’m tone deaf. And the more intimate the better, I suppose.”

“Exactly!” he says. “It’s like a basement show in your belly!”

“And the audio books,” she says, turning to face him again. “It’ll be an intellectual, like whatshisname from Bad Religion.”

“Hey! We could load some language books!”

“So I know you weren’t into the whole surprise womb speaker thing the other week,” he says. “So I’ll be up front about this one—not that I really need to be because it’s so awesome, and you’re awesome so I know you’ll think it’s awesome.”

They’re sitting on the patio of a pub, in a village several miles out of the city. She looks over the rim of her artisanal cola, eyebrows lowered in wary skepticism.

“Tattoos,” he says, finally. “Prenatal tattoos. Is that not the coolest thing you’ve ever heard?”

“We’d have to agree on the design, of course,” he says.

She places her glass down on the table with a little more force than is required, crunches up a cube of ice between her teeth, and lets him see her canines.

“He’s Catalan,” he continues. “Well, Cadiz originally, but he lived in Barcelona for three years, so he’s pretty much a native.”

“Right,” he says. “Great people. The whole region’s like the punk co-op of Europe—George Orwell and all that. Remember that holiday we went on? When we had a beer in that squat, there was that mural, and you found that bag of weed on the beach.”

“That was a good holiday,” she says, “But still, I’m not having some stranger tattooing a Descendents logo onto our unborn baby.”

“How did y… ? Well it wouldn’t have to be a band—he does all sorts of stuff. It doesn’t cause any harm and the way he does it, it sort of expands as the baby grows, staying in proportion with his—her, its—body. And it avoids all the hassle later on in life, all the pain—it gets it over with.”

“I suppose it’s more unusual not to have a tattoo these days.”

“Exactly.” He reaches across the picnic table and places his hand on hers. “I know you said not a Descendents tattoo—and I totally respect that, that’s non-negotiable—but I was thinking maybe something pertaining to The Descendents. I mean, they are universally appreciated by all subgenres and across generations, so in many ways it’s a safer option, it’s the conservative option. I’m being responsible here. So I was thinking maybe a coffee mug and maybe a lyric underneath, with maybe Descendents written on the mug.”

“I’d really rather not have a direct reference to any band.”

“Okay, how about just Milo’s face?”

“I’ll think about it,” she says. “So where does this Spanish guy…”

“Of course,” she says. “That was a slip. Sorry. That was ignorant.”

He squeezes her hand. “That’s okay, babe. You’re allowed the odd moment of insensitivity in your condition. That’s why I’m here. To support you. We’re a team. A decision-making team.” He drains his beer and slams the glass down purposefully, “So anyway, I’ve booked you in for next week. It’s a bit of a drive so we’ll have to stay overnight.”

“So you know when we turned vegan, it was a bit of a struggle, right? That was hard work.”

“Yes, for you,” she says. “You and your mini pizza stash and secret trips to the ice cream place and those free supermarket cheese samples.”

He stares at her without expression for a second. “Which only goes to prove my point that changing one’s diet can be tough even for people who really care and really want to live a more compassionate and sustainable life.”

“Willpower can be hard muster, it’s true,” she says.

She hoists herself and her belly out of her easy chair and heads for the kitchen. “You don’t need to persuade me; I read the print-outs you left about the place. It sounds like a good idea.”

“Yeah, I mean loads of people are lactose intolerant already, so it’s no big deal,” she says.

“I know. It’s like why is it even seen as a disadvantage, right? It’s an asset if anything, a head start in leading an ethical lifestyle. We’d be giving our child a biological advantage.”

“No secret ice cream trips for our kid.” 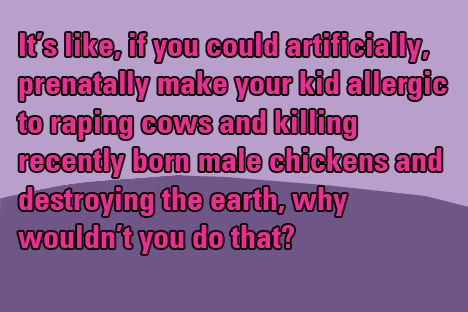 “Exactly. It’s like, if you could artificially, prenatally make your kid allergic to raping cows and killing recently born male chickens and destroying the earth, why wouldn’t you do that?”

“She can do that too—make the kid, like, allergic to something in eggs.”

“To something in eggs?”

“Yeah, the yolk. Or maybe the white. The yolk or the white.”

“Babe, it’s coming,” she says one morning, standing in the kitchen and pointing to the puddle on the sustainably-sourced laminate flooring.

“Well, it looks like nature has other ideas, so can we please go? Now. Please. ”

And so she arrives with a tiny coffee mug tattoo on her tiny calf with Milo’s face so small it’s barely distinguishable, and under that in tiny-but-perfectly-formed lettering, there is the word “Descendents.” On the inside of her bicep is a Catalan flag that they didn’t expect but don’t resent, and of course she beats her little legs in perfect four-four time.

But there are side effects.

“I’m afraid your daughter is severely lactose intolerant,” says the doctor. “Beyond anything I’ve seen before. The merest few grams of cheese could land her in hospital for days. Milk could be even worse.”

“And what about the cows violated for your morning latte?” he begins, cradling his daughter in his arms and kissing her gently on her forehead. “Do they have doctors and hospitals they can land in?”

“Well a vet is… anyway, the worse news is your daughter is also profoundly deaf. I’ve never seen it before; the eardrums seem to have developed normally but then ruptured during gestation.”

The doctor gives a weary sigh and continues. “Last of all, your daughter seems to have contracted a rare blood disorder, probably related to those tattoos she has—I’m not even going to ask how you managed that. Anyway, she’ll have the bone-density of an ice cream cone. She’ll be in a wheelchair, probably for the rest of her life. You are the worst parents I have ever encountered and, quite frankly, I don’t know what you’re both smiling about.”

For they are indeed grinning. He has tears of pride in his eyes and her face is glowing sun of cherry red from her recent exertions.

“Our gorgeous daughter…” she says.

They are so elated they can barely say the word.

“A minority!” they finally cry together.

John Miskelly teaches English in Valencia, Spain. This story is tentatively dedicated to Alex and Cait and their impending spawn. “Voy a ser un tio, tio!”