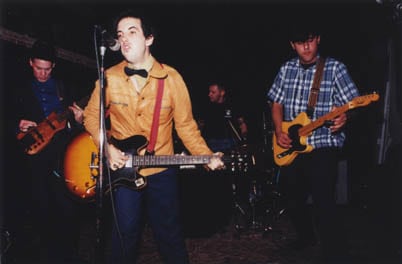 Delivering Babies During a Blizzard in Colorado: An Interview with the Starvations By Todd Taylor

I hate rockabilly. I'd rather listen to my grandparents fuck than listen to rockabilly. It takes any evolution that punk rock has made and throws it right back into the whole high school fashion mode, where it's all about the right clothes and the right car and all the superficial stuff that should never, ever matter in music. The Starvations aren't a rockabilly band. They're not a country band, or a goth band, or an anything band, for that matter. They do take elements of those kinds of music, but at the same time, they infuse it with the same dementia, paranoia, and claustrophobia that I've always associated with punk rock. On the surface, it's very listenable, but if you dig a little deeper, it's absorbing, almost hypnotic, how they take a slew of influences and make them all irrelevant.

Interview and photos by Todd Taylor
Introduction by Josh

Todd: Tell me about being abducted by Christians in Colorado.
Gabe: They weren't Christians.
Jean-Paul: We weren't exactly abducted, either. We were coaxed into coming into their house. They were kicking everyone out of this shelter. These people were like, "Oh, come over. Take showers. We've got clean socks. We've got food. We've got booze. We've got cigarettes."
Gabe: We got caught in the worst blizzard that that area of Colorado had seen in twenty years. One thing led to another, and us and eighty other people had to be crammed into this one-room trailer park club house. Oh, there was a church group there. That's probably how that got misconstrued.
Jean-Paul: And then this chick went into labor. It was fuckin' hectic in there.
Gabe: Some Mexican girl went into labor and everyone was freaking out and they had to get Vanessa, our accordion player, in there to translate. The paramedics came and they couldn't speak Spanish. She had to translate the whole time.
Jean-Paul: I think the woman was miscarrying, so she's screaming and Vanessa had to translate everything.
Gabe: Translating cuss words. "She said, 'It fuckin' hurts!'"
Jean-Paul: It was a bad situation. The woman wasn't well off.
Gabe: ...so, basically, this obese tweaker chick. She seemed really nice on the surface.
Jean-Paul: I thought she was forty-five when we talked to her. Until she took off her hat and glasses inside. She was probably twenty-five and out of her mind. They were looking for drugs and sex or something.
Gabe: We went over there and it was bad. They were kicking people out of the shelter. We have our own theories about that. I think the church group got to stay. It was a really bad scene. Doing drugs in front of their kids. Cussing at their kids. We were all totally delirious. I went right to bed at six.
Jean-Paul: We went to bed at seven, 'cause we were like, "I don't even want to deal with this." Anyway, they were wretched and we were happy to be out of there.
Todd: What happened with this latest tour?
Gabe: It was super duper good. Total treatment we weren't used to at all. Total guarantees, being put up in hotel rooms, and total hospitable people. We were leaving Chicago and we blow a rod in our engine. To make a long story short, our van, with all of our equipment and our albums, is still in Chicago.
Jean-Paul: I don't think you should be having that published all over the place. You keep telling people that and someone's going to take it. I would take our shit, wouldn't you?
Todd: Chicago's a big area.
Gabe: It's somewhere in Chicago and, hopefully, we'll get it back in the next couple of weeks.
Jean-Paul: We'll find you and kill you if take our stuff. If anyone's taking our stuff, you're dead. 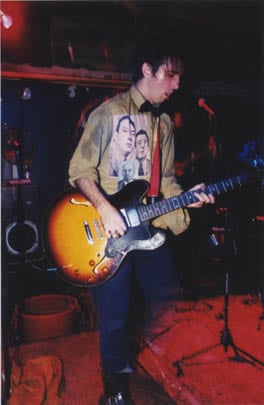 Todd: Do you think things are going your way now?
Jean-Paul: If down is our way.
Gabe: Playing music, in general, turns you into a manic-depressive. You're fucking on top of the world one moment and the next moment, whether you'll read a shitty review or someone's picking apart your lyrics, it's so fucking up and down all the time. It's so hard to tell. You can never even say, "Things are going our way now." I do feel confident that we're doing what we set out to do. You can never fucking tell. Even being on some hip-ass label like GSL doesn't mean your van won't break down and your equipment isn't two thousand miles away, along with our records, which are probably fuckin' warped.
Jean-Paul: Honestly, I haven't looked at the audience in about a year and I don't know if there's anybody there or not. I could care less. I want to make music. I'd rather be in the studio than playing shows all of the time, but that's how it goes.
Todd: Getting out of the cocoon of Los Angeles and the west, how do you think people are responding to it? You're not going on a well-trod musical path.
Jean-Paul: You know what? Everywhere, it's the same.
Gabe: That's definitely not true. People are way more hospitable.
Jean-Paul: Granted, people are assholes in Southern California. They're a lot nicer everywhere else. Essentially, I think everywhere in the world is the same. The people are a little bit different, but on tour, it's not like you get to really know anybody.
Gabe: I think the last tour was a total success. We sold a bunch of records. There was a good response even though we broke down. It's hard to say.
Jean-Paul: I like to travel with the band. It's nice to actually spend time with the band because we never really see each other. We have responsibilities at home.
Gabe: We tend to get along better on the road. We're laughing the whole time, not a care in the world. You come home - I love LA - but it has a lot more frenzied, claustrophobic vibe once you come home.
Todd: Name one trait that you found on tour that you didn't know the other person had.
Jean-Paul: We noticed this tour that Gabe, for some unknown, miraculous reason, has upped his hygiene level by leaps and bounds. You brush your teeth every day and take showers and stuff. It's fucking totally rad. We never expected anything like this.
Gabe: I'm worried about my mouth because my mouth bleeds every time I brush my teeth, so I'm trying to get to the bottom of that whole thing.
Todd: Gabe, what did you see in Jean-Paul during tour?
Jean-Paul: "He doesn't bitch any less." [laughter]
Gabe: Let me think of the band, in general. Ian seems to have a lot more of a level head. He seems to be the backbone, just because he's always driving. Once we're home, he's always scattered and worried all of the time.
Jean-Paul: Probably just because he doesn't smoke pot on tour.
Gabe: Vanessa's super together.
Jean-Paul: More so than any of us.
Gabe: If it wasn't for Vanessa, we totally would have all strangled each other by now, for sure.
Jean-Paul: We'd probably be a lot lewder than we are.
Gabe: The feminine influence has been great, seriously.
Jean-Paul: We definitely behave more than we would, which is a good thing.
Gabe: Because we have a lot of respect for her. 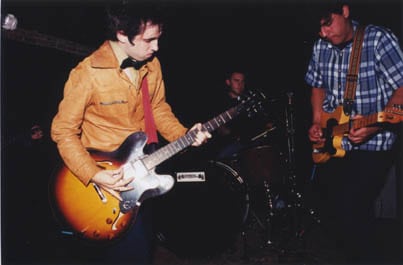 Todd: Have you ever read a review of your music that you just didn't get?
Jean-Paul: Most of the time when I read reviews, I feel like they're reviewing a Gun Club record that I've never even listened to. All the reviews talk about that. We may sound like that, but I don't even know. I had one of their records years ago and I sold it for a pack of smokes. All I know about that band is "Sex Beat," and we don't sound like that. That's all I ever heard and it's kind of annoying because they don't talk about our music. They talk about other people's music. I understand people need references, 'cause it's hard to write about music. It's really difficult, but, at the same time, I feel like no one's ever said anything about one of our records. Usually, they don't.
Gabe: No offense to you or anyone, but the thing is with rock journalism, it seems like it's so fucking easy these days to go on a search on the computer and read what other people have written about you.
Jean-Paul: Steve Martin totally put it best. He said, "Writing about art is like dancing about architecture." It's really abstract. I've been trying to write about music, too, lately. It's abstract to put it in words. It's not words. It's not really something you can describe.
Gabe: You can always tell when someone has actually listened to the record and read the lyrics and really tried to pick the band's brain a little bit. I read a kind of lukewarm review of us just yesterday and this guy picked apart my lyrics scathingly on "American Funeral." Despite that, I'm glad that he really, really, really listened to the record. I keep on getting compared to this fucking kid - Connor Oberst from Bright Eyes - and I still haven't even listened to his music at all. Every single person I've asked about that say, "That's fuckin' ridiculous." Supposedly, he's this really mellow singer songwriter. I don't know. It's strange.
Todd: What's the intention of your music?
Jean-Paul: Music's just become a need. It's nothing particular that motivates me to it.
Gabe: There's never been a message or intention. It's something I don't even think about anymore. There was a time where I was all, "I want to spread as many bad vibes as possible." That was years ago. It's something you do, like brushing your teeth. It's more of a personal need instead of any sort of intention. If you try to make sense out of it, you're going to paint yourself into a corner and you're going to, maybe, look like a bit of a clown, unless your music does have a specific message.
Jean-Paul: Music becomes a person. You can hate them or you can like them. Maybe it's your lover, but if you develop a good relationship with that person, then you need them around. There's this weird chemical attachment to it and music's the same way. You become that way with your instrument.
Gabe: Sometimes I think it would be nice if I wasn't so obsessed with this whole thing that we've all created - obsessed in the way when you have a one-track mind and you don't even think about it anymore. It'd be nice to have some type of balance, but I've devoted too much time to it and it's all I know.