After almost blowing a fuse trying to snag one of the few free parking spaces around the Knitting Factory, I arrived inside just in time to catch Gentlemen Prefer Blood. I honestly had been trying to miss the band, because based on the name and not looking them up while at work, I assumed that they were probably an over serious emo band that trafficked in swoopy hair and mondo tight jeans. I’ve been to more than one show in Hollywood where bills were seemingly assembled based on the fact that all the bands playing had guitars in them. I was pleasantly surprised to find out that, instead, Gentlemen Prefer Blood was pretty good pop punk band along the lines of The Copyrights or The Methadones. The four or five songs I caught ended up being that golden mix of catchy but not too slick for their own good. Also, be sure you check out the Gentlemen Prefer Blood from Los Angeles if you look them up, because the band with the same name from Norman, Oklahoma that I initially stumbled on was quite a different beast.

The Femurs came up next. They’re a two piece band consisting of drums and an acoustic-electric guitar. Most bands I’ve seen like this (which is admittedly few) usually are more sedate folk, but these guys were rocking it Ramones style. I particularly liked it when the guitar player did the Johnny Ramone wide leg stance when he wasn’t doing vocals. The drummer and guitarist traded off on vocals and even instruments once. The set ended up being pretty good. It was like watching The Violent Femmes filtered through the Mr. T Experience. Plus, the guys in the band were so damned excited to be playing with Teeenage Bottlerocket that it was a little infectious, even during their technical problems with a guitar.

Last time I saw Teenage Bottlerocket was around three years ago with the Groovie Ghoulies, and I could almost swear that they had maybe thirty half-interested people watching them. This was not the case tonight. The whole place went off from the first song and didn’t let up for the entire set. They were simply great tonight. Teenage Bottlerocket has moved way beyond a lot of other Ramones-core bands who seem to just ape conventions, and instead have made their two minute songs about basements and Burger King feel fresh and alive. The crowd sang along and danced to nearly every song. There was one large, bearded, hard-partying gentleman who was getting a little annoying by the end of the night with his habit of running into everyone. All in all though, Teenage Bottle Rocket really was a great success, with songs off all their albums getting equally positive responses. Although the Ramones are one of my all time favorite bands ever, I tend to write off most Ramones-core bands because they usually feel stale to me. Teenage Bottlerocket have caused me to reevaluate that stance. 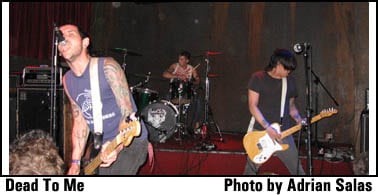 Last up was Dead To Me. Their album, Cuban Ballerina, has become one of my favorites over the last couple of years because of its ability to take the best parts of street punk and hardcore and mix them together with an extra helping of melody, much like the Swingin’ Utters. I’ve seen the band four times before now, but they just keep getting better. Bass/co-vocalist Chicken has to be one of the best stage banterers in punk rock today up their with Paddy from Dillinger Four and Fat Mike from NOFX, while Jack Dalrymple has one of the best singing voices in punk rock along with Jeff Pezzati, Danzig, and Joey Ramone. Also, Chicken’s rat-tail should be considered the fifth member of Dead To Me, because it just stands out for some reason I can’t quite put my finger on. They played a majority of their set from their debut Cuban Ballerina, but also a played a couple of songs that are supposed to be on a new record in a few months, called (I think) African Elephant. One song sounded like it would be right at home on Cuban Ballerina and the other song changed things up with a little bit of reggae in the mix. They both sound like winners and I look forward to anything new the band sends this way. In my opinion, Dead To Me is one of the best melodic punk bands going right now and tonight just upheld the assertion. Honestly, if all they played that night was “Special Professional,” I probably would of left happily. Also, as an aside, their merchandise has the best designs of any band, and, as a bonus, a lot of hot punkettes tend to wear their stuff. That’s just win/win right there, holmes.

HEAVY BLINKERS: The Night and I are Still So Young: CD