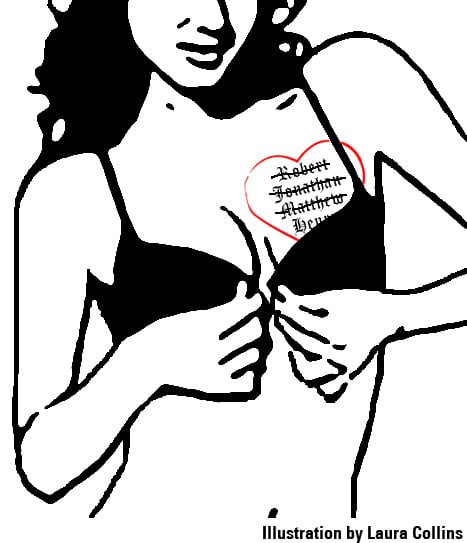 Dead To Me: A short story by John Miskelly

To download this short story as an ebook, click one of the two links below depending on your device.

Any questions or comments? We can always be reached here.

“Do we have to have that photo on the mantelpiece?” Steve asked. “I mean, I’m sitting here watching TV, and I just glance over and it’s right in my eye line. Like, right there.”

Ruth, curled up on the sofa next to Steve, kept her eyes fixed pointedly on the TV screen.

“So can’t we move it somewhere else?”

“But it’s of you and your ex-boyfriend,” Steve said flatly.

“Steve, seriously, I don’t want to do this again. I just want to lie here like a dead thing and watch garbage, okay? Just let me watch some gar….”

Steve was already off the sofa, headed to the record shelf.

“But it’s not just that photo staring at me all day long, Ruth. What about this record? You never play this. You don’t even like this genre—whatever the fuck it is—and yet here it is, sullying our otherwise pretty good joint record collection.”

“I love that album, actually, it’s such a fucking tour de force,” said Ruth, attempting something she hoped would pass for enthusiasm.

“Oh, okay,” said Steve, adopting that sarcastically congenial voice she hated so much. “What’s your favourite track then?”

“On this fucking tour de force, what’s your favorite song?”

“The fifth one,” Ruth said.

“The one after the forth one,” she replied haughtily.

Steve flung his arms in the air with mock triumphalism.

“You see! You don’t even know its name! Because you never play it. You just keep it because it’s his, just like you keep his third year uni text books….”

“And his shitty old clothes. Seriously, how can you expect me to live here. How can we live here together when there’re bits of him all over the flat?”

“I threw most of him away, Steve,” Ruth replied dryly. “You know that. You watched me do it.”

“Really? Did you Ruth?” said Steve, now striding purposefully into the bedroom and rummaging around inside the wardrobe. Back in the living room Ruth could hear the dull thud, thump, and clatter of shoes and coat hangers being shoved aside. Steve’s rant continued, muffled for a moment behind layers of wood and fabric.

Eventually he emerged and marched back into the living room, standing flustered but triumphant in the doorway.

“…then what about this Ruth? Huh? Why do we still have this?” he said, emphasizing each word with a shake of the dismembered, decaying human forearm he’d retrieved from the wardrobe. The hand—still attached, ineptly but enthusiastically—wagged and waved at Ruth with each of Steve’s gesticulations.

Ruth stared at the arm with a deliberate nonchalant blankness. “So?” she said, with the smallest shrug she could possibly muster.

“’So?’” repeated Steve “Well, a: it stinks, b: it’s weird for me to have bits of your fucking ex hidden round the flat and c…and c…” Steve trailed off, exasperated.

“And c…the landlord,” groped Steve. “If we’re not allowed to use Blu-Tack on the walls, I’m pretty bloody sure rotting body parts in furniture is also prohibited.”

“Pretentious? Pretentious?” spat Steve, tossing the arm contemptuously onto the sofa. It landed with a squelchy thud next to Ruth, just close enough so that the clammy fingers tickled her thigh suggestively. She picked it up. It had a not unpleasant squashy, bloated feel to it—like a very large, very ripe banana. She was tempted to squeeze it, just to see what goo might ooze out of what hole. It did indeed stink, but she raised it up to her nose regardless, seeking out any remnants of his lingering odor. And there was a bit—just a faint tinge—of that hand cream he used to….

“Are you smelling it?” Steve barked.

But Steve was already heading back into the bedroom.

“And what about this?” he said. “Every time I go into your underwear drawer….”

“What the fuck would you be going in there for?” Ruth yelled back indignantly.

“I—I…. Don’t change the subject—every time I go in there I have to look at this.”

Again he emerged, this time with a foot—half the shin bone still protruding from the mess of congealed, blackened blood and tattered flesh that made up the stump—and, cupped in his other hand, a thumb and the top half of a middle and index finger, cut off just above the joint.

He thrust the greying, rank digits under Ruth’s nose. “Do you really need to keep these? In your underwear drawer?” he snapped.

“Those happened to bring me quite a lot of pleasure when he was alive, Steve, if you must know, and I’ll thank you not to go snooping around….”

“Urrgh!” Steve gasped, turning away from Ruth in revulsion, and then sitting on the coffee table with his head in his hands.

Ruth didn’t care for such bluster and botheration. It made her agitated, and bad things happened when she got agitated. She took a breath and mustered up the most conciliatory tone she could manage. “Look Steve, like most people, I tend to hang on to objects and things that carry sentimental meaning to me, even if things do eventually turn a bit sour and I kill them with a shovel and cut them up under the cover of darkness. They still carry meaning.”

“Yeah,” except for most people it’s just a gig T-shirt or a photo,” said Steve, his head still bowed.

“If I remember rightly this all started with a photo,” Ruth said soothingly, allowing herself a surreptitious roll of the eyes.

“You know about the head?”

“Behind the prunes in the pantry; gave me a bit of a fright.”

“I didn’t think you ever ate prunes.”

“Look Steve, I’m with you now, okay? He’s always going to be a part of my past, but honestly Steve, he’s dead to me now.”

“Yep, okay, bad choice of words, but you catch my drift.”

Steve sighed heavily, got up, and walked into the kitchen. Ruth remained on the sofa for a moment, pinching the bridge of her nose between thumb and forefinger, gathering herself before following Steve into the kitchen.

“I don’t know Ruth,” Steve said in a low voice, leaning against the sink and staring despondently out the kitchen window.

“Don’t know what?” replied Ruth, placing a comforting hand on his waist.

“I just don’t think you’re over him.”

“Well it’s not like we’re going to get back together. I mean, he’s in pieces.”

Steve suddenly noticed he was still holding the rotting foot and placed it on top of the bread bin before continuing.

“And those pieces are in our flat. He’s in our flat, all the time, living with us. I just don’t think I can do it anymore. What are you getting out of that drawer?”

“Just a, err, teaspoon, I was going to make a brew. So what are you saying Steve? Are we over?”

“Oh bloody hell, Ruth,” said Steve, spotting the large knife gripped tightly and resolutely in her hand. He breathed a heavy, resigned sigh. “It doesn’t always have to end like this you know?”

“Well I have my own way of dealing with things Steve. You knew that when we got together,” she said.

Steve was arching his back against the sink now, as Ruth, or more specifically the point of that blade, slowly bore down on him. Suddenly, out of the corner of his eye, he spotted something on the shelf to his right.

“Oh, shut the fuck up Steve,” said Ruth as she lunged.

"John Miskelly is just about hanging on in Bristol. Bristol is where PJ Harvey is from and enjoyed a once-lucrative position as Britain's premier exporter of black slaves to the New World. John works an administration job in the public sector, because seriously what the fuck else is there to do these days that doesn't involve making money for dipshits? He writes a blog at www.protagonistcomplex.blogspot.com and sometimes puts out a zine called BonusCupped. He is the sole member of no-fi garage punk outfit The Hoglets.