The Daycare Swindlers formed in Washington, D.C. in the mid '90s. Since 1998, they have toured a whole bunch and released four albums. New & Tasty, Testosterosa (both of which are punk rock with influences of reggae, surf, and DC hardcore), and In Loving Memory (which is a little harder sounding) are on Vile Beat Records. Their newest album, Heathen Radio, is on Go Kart Records and will be released on November 12th, 2002. This interview was conducted on the 23rd of October, 2002, at a diner in Milwaukee, Wisconsin after a house show the Swindlers played with Two Man Advantage and Toxic Narcotic. For more information on the band and where to get their albums, visit www.dcswindlers.com. 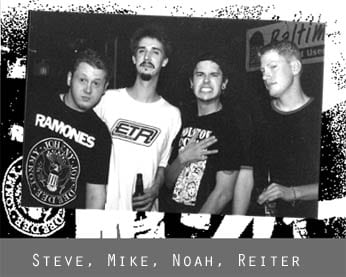 Jessica: Because this interview is being done in Wisconsin, it has to be asked. . . what's your favorite kind of cheese?
Noah: Jalapeno cheese - pepper cheese.
Steve: Pepper Jack?
Noah: Yeah.
Steve: Yeah.
Mike: Uh. . . Cottage.
Noah: Cottage? You are old. Cottage cheese isn't really cheese. . . that's milk. It's dairy. It's old milk, man.
Jessica: It's like curds and whey.
Mike: Okay. . . Parmesan.
All: Yeah. . .
Scrote: For myself, it would have to be Gorgonzola.
Steve: Not Limburger?
Scrote: Definitely not Limburger.
Reiter: A nice Stilton.
[laughter]
Noah: Is that a firm cheese?
Reiter: It's a firm cheese. It's from the vein cheese family. Much like blue cheese, but stronger. . . more robust. And it's very aromatic.
Jessica: If you got control of a major radio station for a day, who would you be sure to play on it?
Steve: Us.
[laughter]
Noah: Two Man Advantage.
Steve: Yeah, definitely Two Man Advantage.
Noah: GC5, Hudson Falcons.
Steve: Rocket 350.
Noah: Leftover Crack.
Steve: Riverboat Gamblers.
Noah: Elvis Costello.
Reiter: Kid Chaos.
Scrote: Bad Brains.
Noah: Tom Waits.
Scrote: Peter Frampton.
Reiter: Yoko Ono.
Jessica: . . .and Aerosmith!
Scrote: The five-way split. Yoko Ono, Peter Frampton, Aerosmith, T. Rex. . .
Steve: . . . and The Dictators. 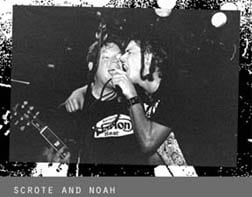 Noah: Don't forget Dick Dale.
Steve: Yeah.
Noah: Some Native Nine.
Reiter: Maybe some American Thighs.
Noah: Booger Weed.
Noah/Reiter: Tentacle Butt.
Reiter: Crystal Clit.
Noah: All the big bands.
(More band names are listed, but they all overlap each other and are unintelligible.)
Jessica: I was reading about how you guys got a lot of shit for the cover of your album Testosterosa. (It features the band members climbing onto the body of a larger-than-life woman wearing a tight dress.) I was just wondering why you think that is, and if you think that sometimes people in the punk scene have the tendency to be so politically correct that they can't have any fun?

Reiter: Before we even answer the question, we have to tell you the story behind the cover of that album, because that's not the cover we wanted. We designed the cover. When we recorded that record, we had a $5,000 recording budget, and we went over by several thousand dollars. So, by the time it actually came about, we had this whole Russ Meyer concept that Scrote came up with, like Faster Pussycat, Kill! Kill!, or a James Bond kind of thing. So we did the photo shoot for it, we sent it in to the label, they used their own graphic designer, and he came up with that cover (the one that ended up on the album). Because there was so much money spent on the recording and we went so far over budget, that's the record cover that we got.
Scrote: He basically said, "This is your cover, whether you like it or not."
Jessica: That sucks! So you didn't even get shit because of your decision. That's really lame.
Steve: And all that mainly came from that whole Wilson Center/Contraceptives/Sidebar fiasco.
Scrote: Yeah, we were accused of being sexist and racist.
Jessica: What?
Scrote: Well, there was this whole altercation in Baltimore at a show with this band, The Contraceptives.
Steve: That was the first show we played in Baltimore.
Scrote: …And this person that was with The Contraceptives grabbed the mic out of Noah's hand while he was singing and threw the mic into his head.
Noah: She was yelling, "You're sexist! You're sexist!"
Steve: They were heckling us the whole show. We were like, "You don't like us, that's cool, but you're ruining this for everybody else." She flipped out and grabbed the mic out of Noah's hand, threw it at his head, and split his head open. And then words were exchanged.
Jessica: And because of that you were sexist and racist?
Noah: Yeah, well, somebody said something like, "Fuck you, you stupid dyke," or something like that.
Scrote: But it was a girl calling another girl a dyke. That was the thing that was ridiculous about it. And then there was some crap that went back and forth between guestbooks. So the band told the Wilson Center, "These guys are a bunch of sexist assholes."
Steve: So I had to call up, I think it was Mita who was setting up the show, and explain our side of the whole story and why we should be able to play at the show - where we had to sing into mops.
[laughter]
Jessica: What?
Steve: We had to sing into mop handles. That was the PA system: a microphone duct-taped to a mop stick.
Noah: It was hard to hold it in place so it didn't move around too much.
Steve: Yeah, and that was a great show.
Reiter: The accusations are further reaching than just that incident.
Scrote: A lot of reviews. . .
Reiter: That record, the week that it came out, charted #8 on the CMJ adds chart.
Jessica: Oh, wow. 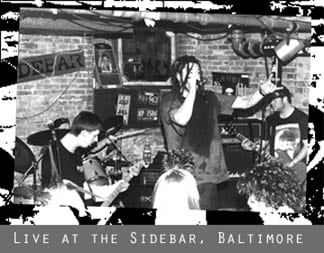 Reiter: It beat out a Bob Dylan record the week that it came out. We had the Syndicate working it. The record label hired the Syndicate to work it to radio. So, the first six weeks that the record's out, the Syndicate talks to all the program directors for college radio. The week that those reviews started coming back, there's little one-line blurbs from all the program directors. And all of it was like, "Sexist pig bullshit crap. I wouldn't play this if you gave me a million dollars, because they're sexist pig fuckers. And this is shit because. . . blah, blah, blah." So the implications of that album cover were much more far reaching than just the immediate backlash in our own little community.
Scrote: But there was a local thing as well, and then there was the whole national thing. So we had to admit that we were truly sexist.
Steve: Yeah, but look at the new Rollins Band cover. That's the worst.
Jessica: And the fuckin' Red Hot Chili Peppers album covers.

Noah: Yeah, exactly. And the whole album, the title Testosterosa - even the cover where we're jumping up - we're worshipping women.
Scrote: And not even the title, but the original concept behind the artwork was a bunch of testosterone-driven women in a gang with chains beating up men! But it turned into this lame beer ad thing because the photographer was like, "Well, I don't copy other people's work," and so he did his own thing which was completely not what we wanted. But we're not bitter about that.
[laughter]
Steve: No, not at all.
Reiter: We're very happy with the record cover.
Scrote: It was a learning experience, to say the least.
Reiter: Mike covers it up with duct tape every time we lay it down on the merch table.
Scrote: We wanna re-do the cover.
Noah: Yeah, we were thinking about trying to re-print it and stuff.
Scrote: At the same time, it's stupid that it's gotten so blown out of proportion. It's just a fuckin' album cover. If you don't like the cover, then don't listen to it.
Reiter: Make your own cover.
Scrote: Yeah, if it's so important what the cover looks like.
Jessica: It's not even offensive. I mean, I never would have thought that.
Scrote: We were at a Leftover Crack show and this girl came up to me and told me she found it offensive, yet she wasn't offended by Leftover Crack burning down a paper maché model of the Twin Towers.
Steve: And she was also offended by Two Man Advantage's "testosterone performance."
Scrote: Yeah. They didn't even do anything. Yet it's okay to mock two thousand people's deaths, I suppose.
Noah: Well, she was from Berkeley, so. . .
[laughter]
Jessica: Those fucking Berkeley people. 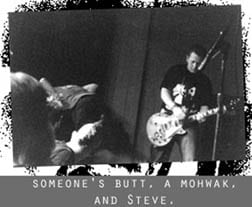 (After the interview ended, there was more discussion about the destruction of genres. We decided that we couldn't destroy country or folk or rap because there was a lot of it that was actually good, and Scrote vowed to destroy opera.)