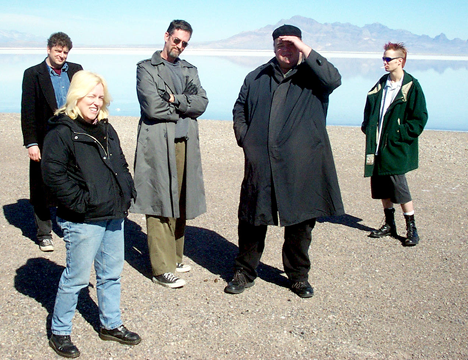 I had the good fortune to talk with the inimitable David Thomas. He is the founder of phenomenally iconoclastic, angular, subconscious-speaking Cleveland bands Rocket From The Tombs and Pere Ubu, on the occasion of his release of the second in a series of box sets, Architecture of Language 1979-1982, which gathers together  New Picnic Time, with its companion releases The Art of Walking and Song of the Bailing Man.  It's truly a gorgeous recording. I've listened to Pere Ubu for decades, and discover new, ingenious, and horribly disturbing things every time I play this new collection. We also discussed RFTT's new release, Black Record. David talks about his creative process and his unique musical vision.

Erin: You have famously said that you hate punk rock. Is that why you once refused to tour with the Buzzcocks?

David: I don't hate it. I have never said that. I don't respect it or consider it anything more than a corporate control mechanism. I dismiss it like one dismisses manufactured boy or girl bands. It's not worth the emotion of hate. I don't know anything about touring with the Buzzcocks.

Erin: I heard David Byrne quote you to Lou Reed as saying Reed's music is "folk music," and Reed agreed with that characterization. Is it accurate that you said that, and if so, can you say more about that?

David: Allen (Ravenstine, Pere Ubu keyboardist) would explain that Pere Ubu is a folk band. The whole scene, even counting all the part-time musicians, sometime soundmen, wives, girlfriends, hangers-on, and friends of friends amounted to not much more than one hundred people. It was a small, isolated society living in a geography as isolated as any pioneer outpost on the Nebraska plains. And they identified with their geography. Passionately. Except the geography was not rural. They found themselves in a lost world, where the sun would set, the inhabitants flee, and the stones of the bridges, buildings, and monuments whisper in the timeless dark, speaking in a dead language of the hopes and dreams and fears of long-lost ancestors. The vision was too powerful. They were too young.

Erin: The box set's notes seem to suggest themes of chaos and ephemerality. Pere Ubu expresses a grotesqueness, according to Allen Ravenstine, by layering textures together. You capture lived, psychic experience in a way that I think no other band has done. Can you tell me a little bit about how your songwriting process has changed over the years and lineup changes?

David: The songwriting process hasn't changed. People come into my sphere, they stay for awhile - sometimes decades - and they leave my sphere. While in my sphere I work with them no different than I work with, or have worked with, anyone else. I don't change, the world changes. I stay the same. I draw creative, strong people in. I study what they bring with them. I give them freedom to alter, magnify, ignore, or deprecate what I do and what I want to do. Only if absolutely necessary”to preserve a conceptual integrity”do I interfere with their intentions. In the book Chinese Whispers, I describe the method at some length. I'm not plugging the book. The book, a limited edition, is out of print. And I'm not going to summarize it because I already wrote it all down. "Say something once, why say it again?"

I can be hard to work with. I can make excessive demands. I am not talkative. I don't often give positive feedback. You have to be the sort of person who can work in a relative vacuum and yet be attuned to what I probably want. I can be grumpy. I am capable of willfully throwing away a performance on a petulant whim. That's all on the downside.

On the upside I can do things with an audience that the best of the rest wouldn't even dare to dream of. My stage personality is the opposite of my downside qualities; it's the person I want to be. I always seek to go further and take greater risks. If I dodge one bullet I immediately set up a scenario that requires that I dodge two bullets. I walk a tightrope over a chasm of bitter despair and mostly I don't fall. That's kind of exciting for my co-workers. You don't get that everyday. Plus maybe they like my singing, too.

People like to work with me because I delegate responsibility. Musicians are granted wide latitude. This is hard for some outsiders to grasp because I have the reputation of being a "control freak." Nothing could be further from the truth. It's true that I keep a tight rein on the conceptual integrity of a piece of work, as a conductor would, but within that framework I encourage musicians to find their own solutions. For example, if a section of a song isn't working, I'll pick out the right musician and say, "Fix this. Don't bother me with details. Don't talk to me about it. Talk to the other guys and come up with a solution." The next time we play the song and it still doesn't work I'll ask that person, or others, to rethink the solution. At a certain point I might step in and suggest something concrete. I try not to.

Erin: I think your work is tremendously humorous, with its range all the way from your "wheeps" and "whoos" that Ravenstine found silly, through dark reflections on life's absurdities, and expressions of the oddities of consciousness. It really cracked me up that early reviewers somberly talked about Ubu's sound as reflecting "industrial wastelands." Can you tell me about the role of humor in your worldview and in your songwriting?

David: Human beings are funny. You are funny often at the point you feel least funny. It's about self-awareness - being able to step back and observe yourself dispassionately. If you can make a habit of that you will soon observe the humor of the human condition. I'm sure you've experienced it, seeing yourself proceeding down a path of behavior knowing what the result will be. "Oh please! Don't do that again!" Human beings... ya gotta love 'em.

Erin: Do you still find that Pere Ubu went through an early "dark period" that had a definitive ending?

David: No. I don't think we ever had a dark period. Or do you want gushing lyrics/sounds? The only period where I personally set out to do "dark music" was some of my solo albums. The problem there was that I was using a narrative vehicle that depended on creating a hysteria of surface "happiness" that only thinly disguised the reality of the narrative.

People didn't seem to "get it." Here's a simple tool. If an Ubu / Dave Thomas song seems to be happy then it is actually probably tragic. If it seems to be tragic, then it's actually, at the core, probably not. In any case, "happiness" or the lack of it is not a subject that means anything or holds much interest for me. Who cares? 37,182 people have died while I am doing this interview. What the hell do my feelings amount to? I'll tell you - a hill of beans.

Erin: I love the new RFTT Black Record, which has eight new tracks and includes collaboration with Cleveland's This Moment In Black History. It's a fun, pleasurable listen and it reminds me of the great influence you had on bands like the Pixies. I remember you saying something to the effect that you always wanted music to be challenging and not to be purely for entertainment value. A lot of popular music was pretty dumb when you started RFTT as a parody concept. Do you feel like RFTT still has some of that parody element?

David: No. No parody element. Are you suggesting that a lot of popular music now is not dumb?! I think I can count on the fingers of one hand, for example, the number of songs about girls I've written that are actually about girls. If there's a girl who seems to be the subject of a song or is mentioned in one, I can almost guarantee you that it's got nothing to do with anyone of the female sex, or any sex. I don't waste my time with that subject matter, and in any case, there are too many other people who have done it better than I can, so why should I work in an overcrowded field?

Everything I have to say I've said already over the last forty years, and now that I'm facing what time I have left on the planet, I have limited endurance for revisiting myself. One of the best pieces of advice I ever got was: "Take yourself out of it." Life-changing advice I recommend to everyone. Who cares about you? What you think, especially what you feel? Tell a story that doesn't have you in it. 43,112 people have now died.

Erin Schultz is an Austin, Texas writer, single mother, and recovering punk rocker. She can be reached at [email protected]