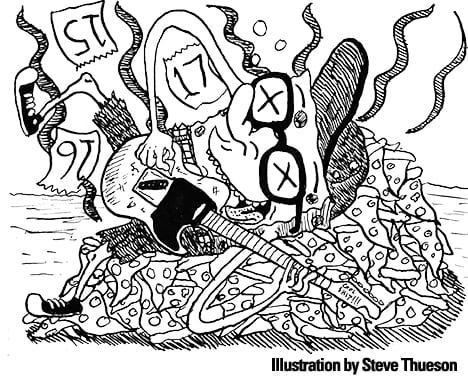 Dave Strait plays guitar in The Slow Death along with every other band Jesse Thorson has going. If you haven’t had the pleasure of meeting Mr. Strait, believe me, he is an upstanding individual. One of the nicer people I’ve met. So, it wasn’t too far of a stretch to have a weekend-long festival in Minneapolis named after him. I was able to partake in said event by riding up with The Haddonfields, who played the first night. I have been their “merch guy” since March 2012. I’ve been to the East and West Coast and points in between with the Saint Louis pop punkers. Always a good time. I took diligent mental notes throughout the weekend. I need to put “photographic memory” on my resume. So if you aren’t tired of reading yet, here is my punk rock journalist, first-hand account of the weekend. Follow along closely.

I drank a few cans of Bud Ice and smoked on a couple of joints after being picked up from my house after work. I passed out around 6 AM. We rolled into town around 1 PM. We all crashed out for a few hours at our hotel room, which was booked near the University of Minnesota. I woke up around three, grabbed some snacks out of the vending machine, made the shitty coffee in the room, and watched TV. Interesting, I know.

We got to the Hexagon Bar around 6 PM, picked up our wristbands, and I got my Fuck Dave Strait Fest T-shirt. Our next stop was a liquor store, where I picked up a case of Blatz and a couple of UV vodka airplane shots. Grape and cherry. Very dudely. Jesse had some Hot-N-Nasty pizzas in his van. I got a slice of pepperoni. The show was very cool. It was free admission (which it, apparently, always is), and a lot of people showed up. Braver, Tight Bros, Apocalypse Meow, The Haddonfields, The God Damn Doo Wop Band (their last show, so if you missed it, you suck!), The Manix, and Lipstick Homicide all played. Every band was great. We didn’t sell any merch. Go figure. I had two Dudes Magazines left from the last issue. I gave one to Mike Cranberry. The last thing I really remembered was watching Lipstick Homicide. Then, I remember eating Cheez-Its and some kind of cheesecake thing in the hotel room. And at some point, I left the room thinking the door led to the bathroom. I stumbled around in the hall, trying to open room doors, thinking each one was our bathroom door in hopes of trying to get to the bathroom. I eventually realized what I was doing and went back to our room door. I knocked on it until Noel opened it for me. Good night.

I woke up and got my shit together. Since we had to check out by 11 AM, we decided to scope the Mall of America. This was my first time in Minneapolis and no one except Nate, who was there on a layover, had ever been to the mall before. We headed strait (get it?) to the Nickelodeon Universe. Curt was afraid he’d be too fat to coast, so he and Noel headed to the arcade. Daren, Nate, and I bought the Meteoroid Package (twenty points) for $18.99. It was well worth it. We even got Shredder buttons as we purchased three more points so we could ride the Log Chute. Then, everyone got their picture taken with SpongeBob SquarePants and Squidward!—well ,everyone except Noel, who’s too much of a grown-ass man for that shit.

We had lunch at Bubba Gump Shrimp Company. It was actually really good. I had boneless fried chicken with mashed potatoes and corn on the cob (which, oddly, didn’t come with butter). Our waitress had an interesting accent. I guessed Czech, and I was right. I have an ear for these things. After we ate, I gave Jesse a call. I asked him what he recommended for us to do. It was around three and the show didn’t start until six. He said we should check out Lake Nokomis. It was nearby and sounded right up our alley.

There was a nice beach and the water didn’t seem too cold, so I got in. No one else did though. Bunch of boners—especially Daren, who just sat in the van. I really think something happened to him as a kid. We hung out there for a while and managed to get to the Triple Rock Social Club around 5:30 PM. We had already started drinking. I changed from my swim shorts into my regular shorts on the side of the van. Curt and I went for a walk to score a bag of ice (which is very hard to do in that neighborhood), I ate some of Noel’s leftover poutine, and then we went inside to check out the show: Dirty Hits, Sundowners, Lutheran Heat, Nato Coles And The Blue Diamond Band, Pretty Boy Thorson And The Falling Angels, Gateway District, Tiltwheel, Frozen Teens, Dan Padilla, Chinese Telephones, and Future Virgins. What a lineup! That was a good show. I scored some merch and then headed to the van.

We were gonna head to Logan and Dave’s house, but ended up driving around for cigarettes and food (you’d be surprised at how little is open at 2 AM on a Friday night in Minneapolis, or at least I was) for a while until we just decided to go back to Mike Cranberry’s place. Some vittles were scored at a gas station though! Back at Mike’s, we drank some more beer and talked about shit. I was about halfway through a slice of oven pizza (or as some people call it, frozen pizza), when I realized there were mushrooms on it. I stopped eating it immediately. I guess I was so drunk that I thought the mushrooms were just some kind of weird-colored meat at first. I said that I hate mushrooms, unless they’re the special kind. That led to talking about acid and Mike being color blind. Good conversation. It was 4:30 or 5 AM when I got horizontal. 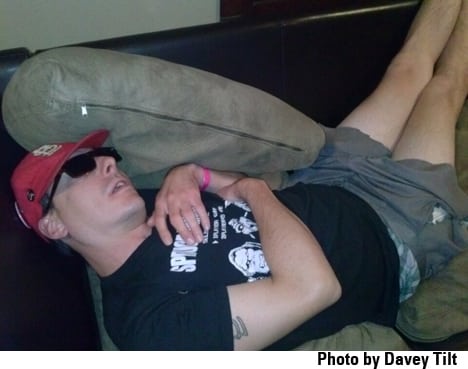 We left and headed to Grumpy’s. I ordered up a beer and The Elvis Burger, which has peanut butter and bacon on it. Fucking awesome! Inside, music was getting jammed out. Tyler Haag & The Bar, Ian Graham, Chokecherry, Rational Anthem, The Turkletons, and Humanoids (from Saint Louis!) all played. It was just what everyone needed to get the party started. I bought Partee Nate (of Guy Morgan fame) a shot for taking his van (he was standing in for Lew for The Haddonfields), and told Dave Strait “Happy Birthday.” We left around 5 PM.

Jesse called me while we were stopped at a gas station to get smokes and take a shit. He informed me that the show at the Triple Rock couldn’t start until we got there. We had the kick drum which was going to be used that evening. Logan had given it to us at Grumpy’s because someone left him with all the gear and it wouldn’t fit in his van or something. I informed Swan that we were five minutes away. Because we had crucial gear, we earned a V.I.P. parking spot right out back. Prime party location. I drank in the van for a bit before heading inside: Dead Skull, Strong City, It’s Criminal, Arms Aloft, Raging Nathans, The Slow Death, Too Many Daves, The Copyrights, Brokedowns, Cheap Girls, and Dear Landlord finished the weekend off.

No complaints. Mike had bought Dave a hat that had a blonde ponytail sewn into the back of it. I wore it for a while before giving it to Dave during The Slow Death’s set. He and Jesse both looked really good with a blonde ponytail. While I was wearing it, I went outside to smoke a cigarette.

A girl walked up to about ten feet from where I stood and asked, “How’re you doing?”
“Fine. How’re you?”
“What’s going on inside?”
“A weekend festival thing.”
“Is it eighteen and over?”
“I don’t know. Are you eighteen?”
“I’m twenty-six and not a prostitute.”
“I didn’t think you were a hooker. Are there a lot of them in this area?”
“I think so.”
“I’m from Saint Louis.”
Then, the car she was waiting on pulled up.
“I’m Erin. Have a good time in Minneapolis.”

Weird. She didn’t say anything about the ponytail hat! Maybe that’s why she felt she had to explain herself; she thought I was undercover. Bizarre.

Back inside, I’m pretty sure I did some shots with some people. Out back, I smoked weed with someone. Then I blacked out. I have no tolerance for that stuff. I woke up to people carrying me into Logan and Dave’s house. I just wanted to sleep in the van, but NOOO! I don’t remember much. The next day, I was told I slapped Josh from Rad Girlfriend Records. People were also smearing Taco Bell onto my ass while I was passed out on the couch. I think I was screaming uncontrollably for a while. Good little Saturday night. I slept in the van.

I woke up and went inside. We left about an hour later. We left Cranberry a T-shirt, some records, and some stickers. A nice little care package for our friend. I slept in the van for a while, and woke up when we were somewhere in Iowa. We ate at Culver’s, BLAH BLAH BLAH. I got home at midnight.

The whole thing was awesome. I hope Swan, Annie, and Kat do it again next year. Hopefully, you got as much out of this column as I did out of Minneapolis. I really enjoy traveling and meeting new people. While I do stand by my belief that there are “Too Many Fests,” you just have to be selective about which ones you attend. Dave Strait Fest is one of the good ones. It was well organized (Stresse Thorson, great job!), the venues were all great, everyone involved couldn’t have been friendlier, and the bands were all awesome. Outstanding job and I’ll see you up there next year!