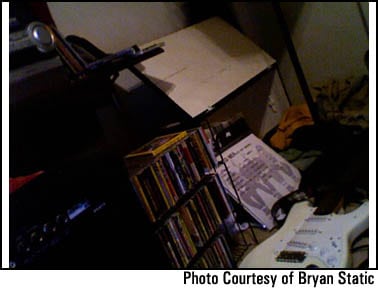 Somewhere between the K and incorrectly placed M dividers of the 7” section of my local record store, it hits me. In this small, but sufficient haven lie thousands of items of or relating to the various underground subcultures that this record store tries to ensure a constant grip on. Even if the vast majority of the selection are bands that would have a greater chance of reuniting Hüsker Dü than getting me to like them, I can’t know for sure I wouldn’t enjoy their musical contributions to the giant collective kiddy pool of creativity until I hear their work. Sure, the pool is lukewarm with so much piss that it’s not safe to put your head in there, but there’s always that one corner where the kids have yet to swim to (for the metaphor to have its full effect, please disregard the laws of physics). But which corner is it? How do I weed out which bands I would never touch? There is too much music in this world!

This isn’t the first time I’ve made this realization either; it comes back once every few months. It makes me feel like I should give up all hope, forget about collecting records, and start a hobby with an end in sight, like collecting butterflies. There’s only like 20,000 of those fuckers floating around and that number is definite—at least, more definite than music is. Perhaps today there are 761 good bands that have ever existed, but tomorrow that number could increase. Butterflies do not quit their species and start a brand new species with spider influences! It’s just not natural!

Every time these thoughts return to me, I reflect on what I’ve spent the last few years of my life doing: obsessing. I was always that kid who listened to the band that no one heard of. When I was in fifth grade I heard the Gorillaz before they got popular. In sixth grade I liked Franz Ferdinand before anyone else picked them up on their radar, and in eighth grade, I discovered NOFX before all the skater kids at my school acted like they had always known about them. Though I originally had no intention of doing so, I had grown away from the radio’s stranglehold before anyone else had. I looked around at my peers and noticed their shirts and binders decked out with the newest press release photos of the #1 Bad-Boy band as declared by the Parental Association of Adults Who Have Never Heard of GG Allin. There was a distance between those people and me. I felt alienated, but there was this sense of joy having something special that no one else had, even if I wasn’t entirely sure what made it so unique.

There was a long period of time where I just gorged on music and when it was all over I was scared to look at what I had just consumed. By grabbing everything in my reach, almost everything I had lost all value. I took what really meant something to me and scurried away. I still checked out new bands, but was very skeptical of what I wanted to listen to. I closed myself off in this little corner and erected large walls spray painted with the words “NO OUTSIDERS” in bright red.

Back at the record store, I look at what’s in my hand; it’s a copy of the Fifth Hour Hero/No Choice split and Toys That Kill’s Don’t Take My Clone 7”. I know that if not for the giant kiddy pool, these bands would have never existed, or at least their chance for survival would be slim. The fact that I found them makes their being all the more meaningful.

Spending days out of the year to find new music is nearly a second job for me. Nearly eighty percent of these searches end fruitless, but every once and a while, I find that one band that hits me so close to as to how felt the first time. And that’s it. That’s what I need to reassure myself of. Yes, there are thousands of bands that sound like crap our there, but looking for the needle in the haystack is half the fun, and when I succeed, I have a feeling of accomplishment: “I found this; this is what I was looking for.”

Here’s to the thrill of the hunt.