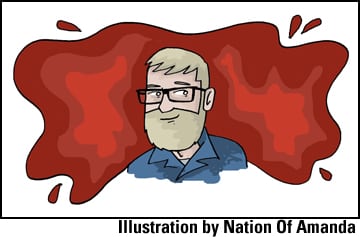 When Dan O’Bannon died in December, most obituaries focused on his role as screenwriter of Alien. Among punks and zombie film fans (two groups with a lot of overlap) he’ll always be remembered as the director and screenwriter of the 1985 dark comedy Return of the Living Dead. In addition to punk characters and music, the movie has science gone awry, a malevolent military establishment, and sheer carnage.

In Return of the Living Dead, O’Bannon created a unique, brightly hued mix of bloodshed and humor. When clerks at a medical supply warehouse accidentally release a chemical that revives a cadaver, their attempts to kill the corpse make for one of the funniest sequences in any film. Influenced by EC Comics such as Tales from the Crypt and Vault of Horror, O’Bannon and production designer William Stout filled the screen with wonderfully twisted details. “Split dogs” (used for anatomy study in veterinary schools) come to life and start barking. In a variation on the same theme, a few of the movie’s pre-dead characters sever a rotted zombie and capture her top half. When they tie her down and ask why she eats brains, Mrs. Torso calmly answers them as her spinal column moves back and forth, leaking fluid. It may be the most visually striking exposition scene in film history.

The writer/director’s only misstep is his approach to Ernie, the embalmer whose funeral home becomes the hiding place for those fleeing the ghoul onslaught. As written, Ernie is a sleazy German with an Eva Braun fetish and other hints of a Nazi past. However, Don Calfa’s marvelous performance cuts the other way. As portrayed by Calfa, Ernie is endearing and fiercely protective of his friends and the others who seek refuge at his mortuary. Consequently, the Nazi jokes fall flat as the audience gets to know Ernie better.

A film with a fanciful plot like Return of the Living Dead’s needs strong characterizations to keep it from becoming ludicrous. The actors, especially Calfa and James Karen (Frank), combined humor and pathos in just the right proportions. Frank’s hysterical reaction to the cadaver zombie and his poignant suicide are two of the most memorable—and divergent—scenes.

O’Bannon put together an excellent ensemble with younger cast members such as Thom Matthews (Freddy) and Brian Peck (Scuz) forging vivid roles while working alongside some of the most experienced character actors in the business. During her striptease scene, Linnea Quigley (Trash) leaped atop a tomb and into the hearts of countless horror fans. No one sacrificed more for the film. By a strange coincidence, Trash was still clad only in leg-warmers when she changed into a zombie. Quigley therefore had to spend the rest of the movie rampaging around in the fake rain while covered in pale body makeup and fitted with one of two masks.

If you played a zombie in this film, you got a workout. Unlike the hobbling undead of other movies, O’Bannon’s resurrected corpses run. A number of observers credit the director with devising cinema’s first high-speed ghouls, but that point is disputed. The monsters in Umberto Lenzi’s 1980 film NightmareCity also sprinted toward their food. However, some horror fans counter that those creatures weren’t technically zombies, but rather living persons infected by radiation. That argument has gone on for years, so I’ll let you decide whether to investigate it further. I try to avoid debates of that sort, except to note that “zombie” and “ghoul” are crude, insensitive terms. I prefer “homeostatically challenged.”

At O’Bannon’s behest, the producers included some great punk and psychobilly on the soundtrack, for instance “Dead Beat Dance” by the Damned and “Take a Walk” by the Tall Boys. The Cramps’ “Surfin’ Dead” is the best track, partly because its placement is ideal. As our besieged heroes struggle to secure the mortuary’s doors and windows—and the ghouls’ arms dart through every opening—the Cramps’ morbid, laid-back song makes the perfect accompaniment. Even so, not every piece of music in the film was a gem. T.S.O.L. performed one song for the soundtrack, but it was the lame, no-Jack T.S.O.L.

O’Bannon later recalled that the production was rife with conflicts, stating that Clu Gulager (Bert) punched him more than once. The director even claimed he told the prop department to replace the lead pipe that Gulager carried in certain scenes with a rubber replica—just in case the actor got any ideas. Such stories sound outlandish, but many who worked on the movie confirm that there were off-camera battles. For instance, William Stout reported that “when several of our team conspired to take control of the film away from Dan, I stood by the guy who had given me this big break and warned him in advance of what was coming.” Stout also said “I came very close to committing felony assault on several occasions.”

After all that trouble, no one received an Academy Award for Return of the Living Dead, which proves that there’s no justice in Hollywood. Even with a mask on, Linnea Quigley could out-act Tom Hanks. For his part, O’Bannon mostly worked as a screenwriter for the remainder of his career. Sometimes he would be on a team of writers; in other cases, he would serve as “script doctor” for someone else’s screenplay. “On assignment writing, they hire you to do what you’ve done successfully in the past,” he told an interviewer. “They essentially hire you not to stretch.”

Before he died, O’Bannon was planning a range of projects. He was particularly looking forward to collaborating with Stout again. O’Bannon once made a remark about Don Calfa that summed up his own career as well: “It’s the movie industry, and we don’t always get to do everything that we can do—especially not if we want to get paid for it.”