I was debating thirty minutes before the show if I was going to attend it. As I have gotten older, I have a hard time going out on weeknights. But I got a job offer that day and it would be awhile before I could go see a show during the week. My last hurrah! Besides, here was a band from Italy who I might not have another chance to see.

I also needed a thrash rejuvenation. I have been getting kind of burnt out, sitting at home listening to power violence, fast-core or whatever records. In fact, I have a big stack that has been piling up for months that I haven’t listened to yet. But seeing and hearing it live is another thing. Having it right in your face and seeing the crowd react off of it is energizing. Also, I haven’t seen a lot of the thrash crowd in awhile since all I have been seeing lately is old school bands like Black Flag, Discharge or the Misfits. Bands from my childhood. I need to see what is happening today.

I forgot who the opening band was but they cancelled. So, Burn Your Bridges opened the show. BYB features one of the forefathers of power violence, Chris Dodge of Spazz / Slap a Ham Records fame (to name a couple of the many projects he has been involved with). He was joined by Bob, from Lack of Interest, on drums to form the guitar and drums duo. They played frenetic-paced thrash numbers that got the crowd excited. Chris engaged in banter with the crowd between songs and closed the set with the theme song from the TV show King of the Hill. You should check them out on the Super Sabado comp LP if copies still remain. 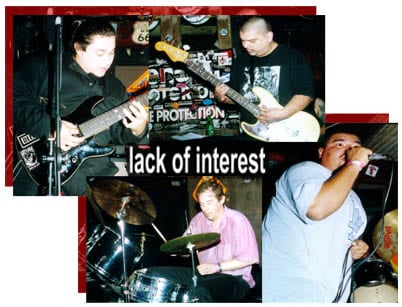 Lack of Interest came on stage and the club filled up quickly. I had seen them before when they played with DS-13 a couple of years ago. It’s great to see that they are still together and it seems more people have picked up their album, Trapped Inside, that was released by Slap a Ham. From the first song to the last, they blasted through songs at a manic pace. Fingers were flying over fret boards and drumbeats were pounded out at a hundred beats per second. Fans in the audience were singing along and the crazies up front were making some movement. I got bumped a couple of times, so as the old, broken-back guy that I am, I moved away from the action. 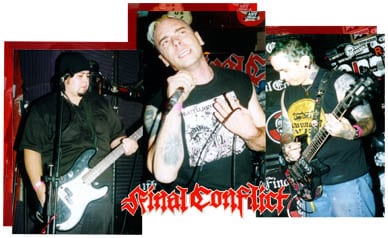 Final Conflict put out a classic record in the mid-’80s on Pusmort Records and it was re-released on Relapse. Let’s see how they stand now. The only original member that I could tell is Jeff the guitarist. They seem to have big amplifiers, so they may come off pretty powerful. They started off the set with “Apocalypse Now” off of the Ashes to Ashes LP. Not half bad. But the song didn’t sound quite right after almost two decades of hearing it sung by Ron Martinez. But it was invigorating hearing the songs live. The new (newer, newest?) singer put a lot of emotion into the songs and moved around the stage. The set consisted of mostly old original material mixed in with some new songs. It’s been a couple of days now and I think they closed the set with a cover of Black Flag’s “Revenge.” 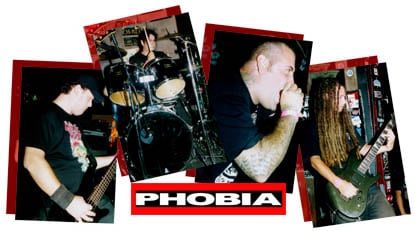 Phobia from Orange County were next. I had heard and seen their name around but never heard the music. I thought they were going to be a crust band. I asked the punk guru, my brother, and he told me that they were a grindcore band. Grindcore is tough after awhile, listening to it on your stereo. But seeing it live is refreshing. Hearing the guttural vocals over metallic riffs and racecar-speed thrash sections, you can’t help feeling the power. If you live in LA, you should know Thrashead. As they played their first song, I saw Thrashead come into the club, weave through the crowd at a speed junkie’s pace with his eyes bugged out, head banging, and teeth clenched. He exemplified what I thought of this band’s set. They reminded me of Terrorizer or 324 for the style of punk/grindcore they played. The crowd was in full action and I felt bad that I asked my brother to shoot pictures for me. He was getting pummeled up front without the protection of a barrier that you would see at a larger venue. 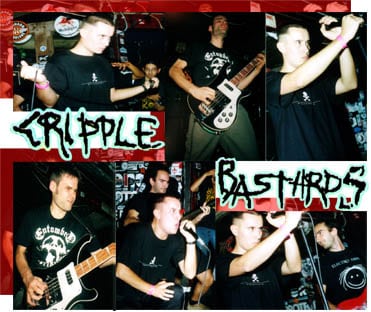 The Cripple Bastards were what people were here to see. I think this was the first date of their west coast tour with Phobia. I may not support the local bands at the level I should in regards to shows, I lose punk points all the time, but I do try to make an effort to show support when the bands are from abroad. Italy was in the house! CB were incredible. They tore through their set with songs that mixed punk and grindcore, sung at cookie monster lows and wailing highs. The singer looked menacing as he blankly stared at the crowd, not blinking for a second. Moshing this was not. This looked like an old fashioned slam pit as people were flying onto the stage, bodies floating on the crowd, and people flying every which way on the dance floor. Me, I stood on the booth against a side wall, looking from above and safely away from the melee. Some hardcore fans were up front, singing into the mic with the singer. You could see the band was totally enthusiastic from the crowd’s love they were receiving. Once they finished their set, the crowd would not let them go. People cheered for an extra song, as they knew this might be the only time to see this band on these shores again. They obliged with one more and the crowd erupted into a massive ball of chaos.

I was worn out from the heat and said my good-byes to friends. I thanked the Cripple Bastards for a great show and took one last look at the club. The Garage, like many clubs in LA, is closing in November. Another loss of a place to see D.I.Y. bands, making it even more inconvenient to see bands like these.

This was another night I felt fortunate.