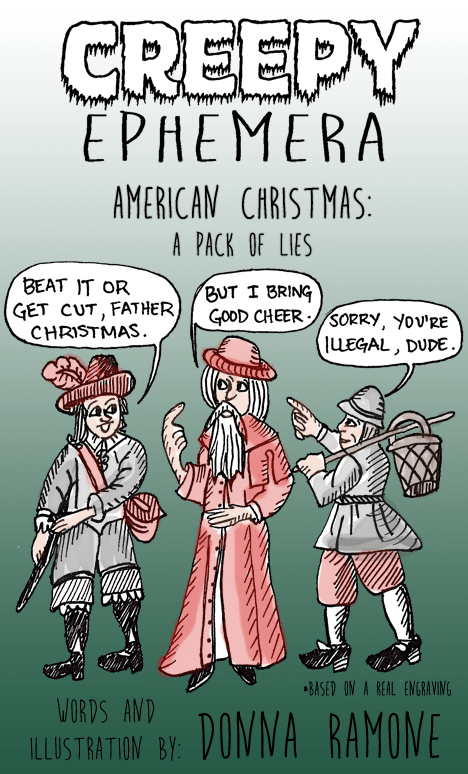 Creepy Ephemera #7: Christmas in America: A webcolumn about the weird

Christmas is mostly a lie. American Christmas was completely made up less than 150 years ago. Christmas was actually thrown together using a smattering of European traditions and the collective imagination. It had little to do with Jesus and less to do with winter. It had everything to do with bringing all Americans together to party. So if I hear one more weenie cry about the so-called “war on Christmas,” I’m bashing them with a history book taped to a bible.

My main reason for wanting to commit literary assault is simple: the first white “Americans” didn’t celebrate Christmas. No Mayflower passenger celebrated Christmas. In fact, they hated Christmas and likened it to the devil. As we all learned in grade school, the first people who washed up on our New England shores in 1620 were dissenting Puritans. What we didn’t learn, however, was that they were party-hating assholes. 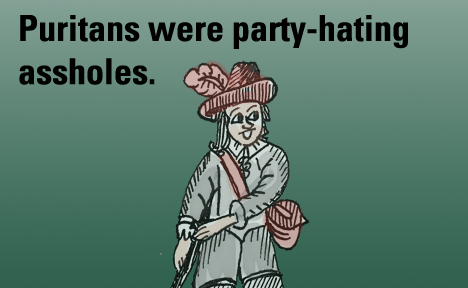 Puritans were super-duper Christian, thought The Bible should be taken literally, and followed it to the letter.The Bible doesn’t mention the celebration of Christmas anywhere, because that would just be Johnny the Baptist throwing his best friend Jeezo a birthday rager. Puritans were also against drinking, excess, rich foods, and having fun, which is what British Christmas was all about. Remember, every white “American” at this point had been British just a couple months prior. The Puritans also weren’t dummies. The reason why the birth of Christ is observed on December 25 is because the Roman Catholic Church co-opted pagan winter solstice celebrations to get more people into Christianity. Puritans hated anything that went off-book. Combined with their volcanic rage against anything Catholic, the American Puritans declared an actual war on Christmas.

In 1621, just one year after showing up in America, some pilgrims attempted to take Christmas day off work and the governor promptly lost his shit. He made sure everyone would always work on Christmas (this country was founded on capitalism, after all). By 1659, Christmas was actually illegal in most of Massachusetts, including Boston, and it stayed that way for twenty-two years. Again, for clarification: Christians made Christmas illegal in Boston for over two decades. 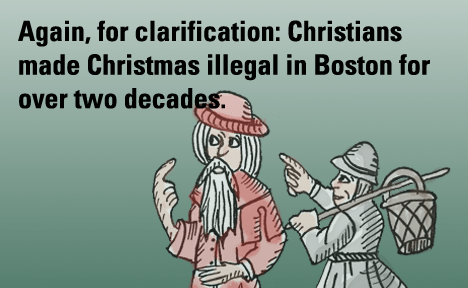 Notices were posted around the city, which read,
“PUBLICK NOTICE The Observation of Christmas having been deemed A Sacrilege, the exchanging of Gifts and Greetings, Dressing in Fine Clothing, Feasting and similar Satanical Practices are hereby FORBIDDEN With the Offender liable to a fine of Five Shillings.”

On Christmas Eve, a dickhead town crier would go around shouting, “No Christmas! No Christmas!” If you were caught taking the day off, having a party, lighting candles, singing, bringing good cheer, or doing anything that even remotely smelled of Christmas, you were fined five shillings and were possibly accused of being in bed with satan. A particular offense was wassailing. That’s when groups of dudes barged into places—including the private homes of the rich—demanding drinks, food, and money in exchange for songs, not unlike most punk bands. The only reason the anti-Christmas law was repealed in 1681 was because England had taken colonial hold of the land and made them get rid of rulings that didn’t line up with British ones.

Through the 1600s, America had no national holidays or parties, only the boring weekly Sabbath. As more white people from other parts of Europe started to show up in the 1700s, they brought their culture and Christmas traditions with them. The British threw loud, drunken parties, Germans placed the Tannenbaum (now called a Christmas tree) in their homes, and the Dutch exchanged gifts and spoke of the legend of Sinterklaas. Some Americans had a nice dinner, but most did nothing at all.

In 1775, the American Revolutionary War broke out and in 1776, a bunch of dudes wrote up a piece of paper that united these motherfucking states. By 1783, the Americans had won the war and anything British was considered garbage. This included Christmas, so it was like our modern St. Patrick’s Day: people still had to work, but the excuse to get drunk and party was welcomed. For fun, look up George and Martha Washington’s recipe for eggnog and revel in the extraordinary amount of booze it contains.

Then we arrive at the Victorian era of the 1800s, the historical period responsible for shaping nearly every part of our contemporary lives. At the start of the century, the American people were segmented in the midst of all that Manifest Destiny. There was the open, lawless West; the religiously progressive North; and the proud, slavery-loving South. In 1861, America was so segmented it resulted in a terrifically shitty civil war, aptly named the American Civil War. In the years surrounding the war, Christmas started to gain new meaning and grew as a favorable holiday among Americans in an effort to help unite everyone and curb the general social anxieties of the country. In other words, they collectively made up a Christmas to feel better.

By the 1800s, books were widely distributed and read by many, which included books by famous authors like Charles Dickens. They often wrote about the joys of Christmas, for example A Christmas Carol, which was published in 1843. Historians have seen the biggest link between Americans getting into Christmas and Washington Irving’s serial The Sketchbook of Geoffrey Crayon, Gent., published from 1819-1820. Included within the stories were “The Legend of Sleepy Hollow” and “Rip Van Winkle,” but it was the fifth installment that spelled out for Americans what Christmas should be—it consisted of five Christmas stories, full of good cheer, charity, peace on earth, and good will towards men. Given, these were life lessons people could, and should, apply anytime, but since the setting in the stories was Christmas, readers associated them with the holiday. That’s right. The guy who invented the headless horseman is also responsible for making up the hallowed “Christmas spirit.” 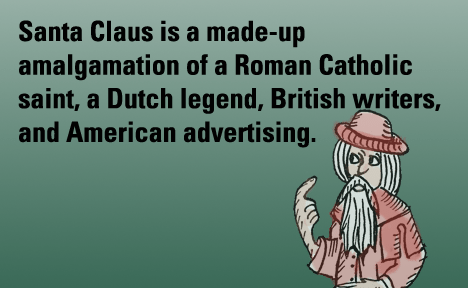 As for the whole obsession with Santa, Irving also wrote a story in 1812 where Saint Nicholas flies over the trees of New York in a wagon. Coupled with the poem “The Night before Christmas” published in 1822, Americans filled in the blanks with St. Nicholas, some saint from the third century, and the Dutch legend of Sinterklaas, a bearded man in red who judged children by their actions. They then Americanized him as Santa Claus, so he seemed more fun and less Catholic. Somewhere in the 1920s, his look as a fat, white-bearded man in red clothes with white trim was solidified, while Coca-Cola in the early 1930s made him into the happy icon we know today. Santa Claus is a made-up amalgamation of a Roman Catholic saint, a Dutch legend, British writers, and American advertising.

As Americans were fabricating Santa and the Christmas spirit, they were also coming up with every Christmas carol. A German composer originally wrote “Silent Night” in 1818. In 1859, A New York City Episcopal priest translated it into the tune Bing Crosby annoys me with each year. “We Three Kings” was written by an Episcopal rector in 1857. A Scotsman gave “Deck the Halls” English lyrics in 1862. “Good King Wenceslas” was written in 1853. “Angels We Have Heard on High” in 1862. “Carol of the Bells” in 1904. Fucking “Jingle Bells” in 1857. Some carols used older classical pieces and simply added lyrics, but that doesn’t change the fact that all music which throws me into an unparalleled screaming rage each year—the ones people think are as old as time itself— were mostly written in mid-1800s America.

When the Civil War ended in 1865, the country was still a complete mess. People wanted peace and good will. They wanted to look at beautiful, shiny things, sing songs, and have joyous dinners with family members. They wanted all people—rich or poor, immigrant or native, Puritan or Catholic, North or South—to be united and happy under the banner of America. What more natural of a way is there to unite a group a people than partying? And what better excuse to party than Christmas? The parties evolved into a huge, weird jumble of everything people had seen, heard, or read about Christmas. Many Americans mistakenly thought it was all based on old, European customs. Most people still do. They never realized a fictional story they read about Christmas was also fictional about the “age-old” traditions.

The American people totally loved it. It was a holiday purposely created to have only a vague dusting of faith as a means to include everyone who had settled here (thus the heavy emphasis on Santa Claus). Nearly every American at the time was either an immigrant, the child of an immigrant, or the grandchild of an immigrant, and recognized America to be the proverbial melting pot it was. The devastated post-war economy was coming back as businesses made money from selling German Christmas trees, Dutch Christmas gifts, and English Christmas cards. Taking time off to gather with family was also very important to Americans after so many loved ones, on both sides, had recently died in the Civil War. It made the general spirit of the country feel a lot less shitty, and a lot more happy and hopeful.

Thus, it was in 1870, only a mere 145 years ago, that the United States government made Christmas a national holiday. 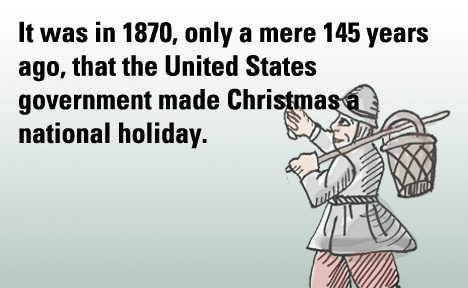 Everything America does each year come December is either a bastardization of any number of European customs, or completely made up from any number of sources. Americans crafted their own Christmas to fulfill the needs of a divided and upset country. Today, each symbolic decoration harkens back to the many sources that helped create the most revered American holiday. Wreaths and snowflakes came from ancient pagan winter celebrations, pine trees and gift-giving from the immigrants who came here for a better future, one large brilliant star from the mythical virgin birth, and a string of bright lights, from Thomas Edison, who had found yet another way to make money in 1880. All together, this beautiful hodgepodge of cultures and ideals was forged to bring folks together and make everyone happier. Hell, it still does to this very day. Even for miserable misers like myself.

This article is dedicated to Plymouth Rock, because while researching this article I discovered that was made up, too.

What isn’t a lie, America?!

Donna Ramone is really into murders but not murdering.
[email protected]