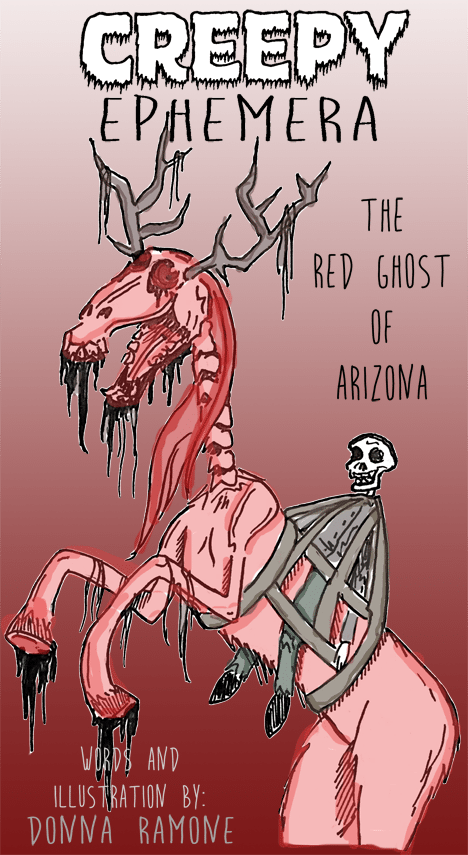 Creepy Ephemera #6: The Red Ghost of Arizona: A webcolumn about the weird

Tonight, Creepy Ephemera brings you a frighteningly true ghost story, one about a cruel and dreadful red beast. On the back of that evil monster rode satan, the master of darkness himself. The beast was called the Red Ghost, and it came to violently murder the innocent before it disappeared into the desert like a hellish phantom.

It was 1883. Two families lived together on a plot of land in Eagle Creek, Arizona. Their water came from a spring nearby, located in a thicket of willow trees. The men of the family had ventured off for the day to count what sheep remained after Apache raids.

The two women were together, seemingly safe, tending to their children within their simple adobe home as their dog circled around outside. It was morning and the air was crisp and still. One of the women stepped out to retrieve some fresh water. She walked out slowly towards the nearby grove of trees, several yards away. She glanced around, checking for signs of movement. She sensed no danger. Within sight of their homestead, there was nothing but some shrubs and tress across the vast desert landscape. She carefully moved into the gathering of dense white trees and made her way to the spring when—!

Back inside, the other woman heard the dog start barking frantically. A split second later, the air was pierced with a terrible, “AHHHHH!” The woman ran to the window, scared, expecting the worst: an Apache raid. But what she glimpsed was infinitely more terrifying—there stood the devil, on the back of an enormous red monster, come to take them all! As the screams continued, she barricaded the house to protect herself and the children. She started praying frantically. Then, in a moment just as sudden, the screams stopped. She prayed harder.

The woman inside refused to stop praying and grew more hysterical. The husbands returned at dusk to still find her praying and screaming, telling of how lucifer had come riding on a massive beast to murder them all. The men lit torches and carefully stepped out in the night. Passing into the trees, they held their breath. As they moved cautiously forward, the firelight flickered over something unmoving in the mud near the water. Closer, the scene became painfully clear: it was a woman’s body, dead and lifeless. She was trampled flat and was nearly unrecognizable as the vibrant woman she once was. The scene became even more ghastly as they saw hoof prints in the mud surrounding her mutilated body. They were monstrously mammoth, at least twice the size of any horse. And all over the trees around her, clinging to the white bark, were long, uncanny red hairs. She had been violently and brutally murdered by something unexplainable. Perhaps the woman inside was telling the truth. Perhaps satan had ridden into Arizona.

Days later, two unsuspecting miners slept quietly in their tent under the stars. They were camping near a creek where they were panning for gold, hoping to strike it rich. But in an instant, the tent came crashing down, tearing them out of their dreams and into a waking nightmare. In the tenebrous darkness, all they could hear were deep, ear-shattering screams and immense, heavy hooves thundering down around them. They managed to escape from under the tent and peer into the night. For a moment, they both saw the shadow of a massively tall horror on four legs, like some terrible horse. And like a wraith, it disappeared into the surrounding blackness. The next morning, they sought out fellow miners and returned to investigate the disturbing encounter. By the creek the miners found giant, inexplicable hoof prints and bushes crushed in the dreadful animal’s path. It was clearly something colossally large and incredibly strong. And stuck to the shrubs, the miners found long, baffling red hairs.

By now, half of the West was telling tall-tales around campfires about the Red Ghost. Some said if you tried to chase it down, it would disappear into the air like a specter. Another man swore he saw it kill and devour a grizzly bear. It had killed—there was no denying that—and it was clear it was out to kill again. Satan could come calling for any one of their souls while riding on the back of that horrible red creature.

Not long after, five prospectors caught sight of the cursed rider on the terrific beast as it grazed one afternoon on a mesa. They were scared, but they were resolute. The men crept as close as they were willing to go to the abomination. Hidden, they pulled their guns and aimed with shaky, worried hands.

They unloaded their bullets, shooting wildly with all they had. The Red Ghost took off into the desert, the bullets having grazed, missed, or perhaps passed right through its spectral body. But as it ran and disappeared, something fell off its back and lay unmoving on the ground. The men waited until the dust had settled, then cautiously approached to investigate what the devil could have dropped. As they got closer, the prospectors stopped dead in their tracks as their blood ran cold.

The object they had been gazing at stared right back at them. It was a human skull with scraps of decaying skin and hair still clinging to it.

A few days prior, an honest and hard-working man named Cyrus Hamblin climbed a ridge to look for any stray cattle. As he focused on the dense brush below he saw a large red animal moving. The hair rose on the back of his neck, but he stayed, waiting to see if he could get a better look. Eventually, the creature moved into an open area and it was then, from a quarter mile away, that Hamblin saw the Red Ghost, clear as day—and recognized that it was a magnificent camel. Strapped to its back was the decaying corpse of what was once a man. “What the hell is going on here?” he wondered.

In 1893, nearly a decade since the devil took his first victim, Mizoo Hastings saw the demon grazing in his turnip garden from his window. Carefully, he got his rifle and slowly raised it up. He steadied the barrel of his gun using the windowsill. He took aim, held his breath, and—bang!—in the blink of an eye, the Red Ghost had been finally been exorcised.

By then, the corpse was long since gone, but the straps were still intact; a net of heavy ropes so tight they cut into the camel’s flesh. There were so many questions, but there will never be any sufficient answers. This is, sadly, where the story ends. The camel died in that turnip patch and the dead man mistaken for the devil is forever unknown, his final resting place was the entire expanse of the Arizona desert.

No, this can’t be the end because what the shit was a camel doing, roaming the deserts of Arizona in the 1800s, with a corpse strapped to it?

That upset and roaming camel was actually one of the few surviving steeds of the U.S. Camel Corps. Yes, a short-lived and ill-advised military experiment troop that was created for transporting goods across the deserts of the ever-growing American southwest. In 1836, Major George H. Crosman was the first to bring up the camel idea to the War Department after fighting in sunshiny Florida. But it wasn’t until 1853, after senator Jefferson Davis was appointed as Secretary of War, that the camel dream came true.

The camels were expected to fit better in the harsh climate, last better on longer journeys, and carry a surprisingly large load. While this is true, the soldiers of the American military had no idea what camels were actually like. So they sent a horse handler to northern Africa with a lot of money to buy camels and hire camel handlers. They returned to Texas with seventy camels and a handful of Arabs and Turks who they just assumed—since they were Arabs and Turks—knew how to care for camels.

But domesticated camels aren’t mules. You can’t brand them, whip them, kick them, or overload them, because camels will tell you to fuck off and do nothing. Unless you really piss them off, in which case they’ll spit on or kick you. Ranchers and horse handlers didn’t love the camels, and the camels didn’t love them, and the whole thing was a mess. By 1864, the experiment was considered a failure and supporter Jefferson Davis had left to become the only President of the Confederate States of America, the other self-appointed America that caused the Civil War. The camels were sold at auction, set loose, shot for fun, or in at least one case, pushed off a cliff. But it seems some of them survived to just wander the desert. One in particular was abused and then had a dead body attached to it.

Life in the southwestern United States during the 1800s was fearful and tense, as most settlers didn’t have much in terms of safety. They lived in barren, isolated areas and had managed to upset the local Apache population by going on about “Manifest Destiny.” Any laws or justice were your own responsibility to uphold, and largely left up to guns. When the coroner came to inspect the scene of the murdered woman, he didn’t remotely believe the devil story. He was actually convinced the family had found a way to murder her but didn’t have a way to explain how smashed up her body was or what those huge hoof prints were about. The case was given to a jury and the official ruling was, simply, “death in some manner unknown.” An embellished ghost story was absolutely going to take hold after that.

No one knows what the fuck to make of the Red Ghost, even today. Investigators at the time wondered if the dying man had tied himself to the animal, hoping it would lead him to water or safety. However, when they examined the rawhide straps, they were clearly too tight, tied on by someone in an effort to hurt the animal as well. As the Mohave County Miner reported, “The only question is whether the man was tied on for revenge or merely as an ugly piece of humor by someone who had a camel and a corpse for which he had no use.”

People still claim that in the most remote parts of the American desert, the camels survive, somewhere just beyond sight. Like ghosts.

This article is dedicated to all the camels displaced, abused, and murdered by assholes.

Donna Ramone is really into murders but not murdering.
[email protected]