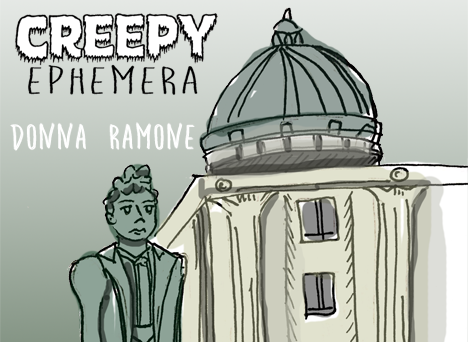 Creepy Ephemera 5 – Martha Hughes Cannon: A webcolumn about the weird

I moved to Salt Lake City two years ago and I have yet to stop hearing polygamy jokes. They probably outnumber all the SLC Punk and near-beer jokes, combined. So it’s with my usual smug, know-it-all tone that I’d like to tell you about the first woman to win a seat in the United States senate—who just so happened to be a badass motherfucking Mormon sister wife.

Martha Hughes Cannon was born in 1857 in Wales (U.K.) to parents who had converted to The Church of Jesus Christ of Latter-Day Saints. Before she had turned three, her family had picked up what they could and immigrated to New York City. Within a year of arriving, they received help from the LDS church to take the worst trip ever to Salt Lake City. I’m not speaking subjectively; they had to walk, with a wagon, from New York City across a lot of harsh, empty land to get to the Utah Territory. It wasn’t even a state yet. On the way, little four-year-old Mattie watched her baby sister die. She was then buried in an unmarked grave along the trail. Her father died three days after their arrival. Of course she wanted to be a doctor after that godawful tour de force.

By fourteen, Mattie was workin’ nine-to-five (what a way to make a livin’). Not giving a fuck about societal norms, she cut her hair short. She was a schoolteacher and attended the University of Deseret, the college established by the LDS church (who were still trying to convince the government to let them keep a chunk of the western territories as their own, separate, Nation of Deseret). She was also a typesetter at the Deseret News and the Women’s Exponent, the women’s newspaper in Salt Lake City. Women had started, created, and distributed their own newspaper in Utah Territory. (Something new I learned: Mormon women were at the forefront of feminism in the 1800s and exemplified the idea of the Victorian “New Woman,” who told tradition roles to fuck off and demanded equal rights and privileges as any wealthy man.) Utah Territory gave women the right to own land, start businesses, and get divorced. Have you heard of the Relief Society? It’s one of the oldest and largest women’s groups in the entire world that was started in 1842 by a group of Mormon women, and their first president was Joseph Smith’s (the leader and founder of Mormonism) wife.

Mattie was only eighteen when she earned her degree in chemistry and wanted to study medicine. She took off for the University of Michigan and got her MD on her twenty-third birthday (med school in the mid-1800s was more like an Associate’s in “Germs are real” studies). Then she went to the University of Pennsylvania, where she was the first woman to enroll in their medical school. She earned her Bachelor’s in Pharmacy, and, on the side, got a diploma from the National School of Elocution and Oratory. Then she headed back home to Salt Lake to work as a doctor in the brand new Deseret Hospital (they were really pushing for that new nation idea to work out). She was only twenty-five and getting shit done.

Mattie was a heartbreaker, naturally. Every dude was falling for this smart-as-all-hell, confident, shorthaired goddess, but she wasn’t into those boring losers. Working at the hospital, Mattie met the hospital superintendent, Angus Munn Cannon. He was also the child of convert parents and from the British Isles. Even though she was twenty-three years younger than he was, they hit it off and got married in 1884. She was his fourth wife.

Right now, all of us are collectively muttering our own versions of “what the fuck?” Our girl Mattie was killing it, going to universities and getting degrees, and saving the world—what is she doing hitching herself to Mr. Baldy McBigamy? In 2015, it sure as hell doesn’t make any sense. In 1886, it didn’t make any sense to people either. Keeping this history lesson brief, Americans fucking hated Mormons. They were the Scientologists of their time. The Governor of Missouri signed an executive order that made it legal to murder Mormons. And this was mostly because everyone found them super weird. Then, when anyone was even a little shitty to them for being different, Joseph Smith and Co. struck back violently. The whole mess devolved into a whole lot of moving, murder and, eventually, a couple wars.

Americans found the whole polygamy thing the weirdest part of it all, and wrote up all kinds of propaganda about how Mormon women were slaves and Mormon men were untamed sexual beasts who were on par with “the Negro.” Americans were all about bigotry and racism at the time, and unless you were white, Christian, and directly from the Mayflower, you were hated (sound familiar?). For women like Mattie, polygamy was very advantageous. She had freedom by sharing household responsibilities, but also had the opportunity to be a wife and mother to a seasoned husband who had already proven to be a decent provider and father. As she told the San Francisco Examiner, “A plural wife is not half as much a slave as a single wife. If her husband has four wives she had three weeks of freedom every single month. A plural wife has more time to herself and more independence in every way than a single one.” Mormon women even claimed polygamy was a feminist cause. Which, in the stuffy segregated Victorian era, could be argued. 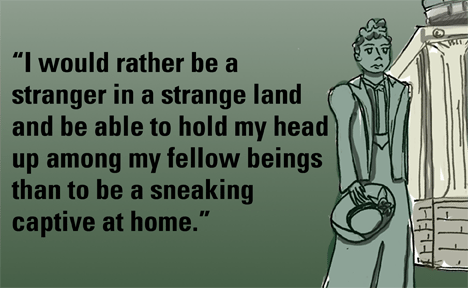 All of this leads to 1886, where after a couple years of marriage and three children, Mattie was pressured to leave for Europe. Federal marshals were after people in polygamous marriages, and her husband was taken to trial by the government and convicted of polygamy. In 1862, President Lincoln signed the Morrill Anti-Bigamy Act, which was written specifically to end Mormon plural marriage and make any Nation of Deseret illegal. But the Civil War postponed any enforcement until twenty years later. Many families went underground, but Mattie wasn’t the secretive type. When she received notice she would have to testify against her husband, she took her infant daughter and fled, going into exile for two years. Moving from England to Switzerland and back to Michigan, she said, “I would rather be a stranger in a strange land and be able to hold my head up among my fellow beings than to be a sneaking captive at home.”

After 1888, when the warrant for her arrest expired, she hustled back to Salt Lake. Only everything was worse for her than when she left. She no longer had a husband she could acknowledge, no home to call her own, and every legal problem was even worse. She threw herself into work. She founded and taught at a nursing school through the hospital. Then she got pregnant again, which meant more legal trouble since a baby proves there was a “union” in the marriage. Fucked (literally and figuratively), she took all four kids and went into exile, again, in San Francisco. Her romantic notions of her husband being her soul mate were over, since he wasn’t exactly helping her much and dealing with his own legal matters. She didn’t regret her decisions, but did admit to herself that if she were to make the choice again, she might have “given the whole plural system a wide berth.”

Because LDS temples weren’t public buildings, in 1890 the LDS Church got a federal ultimatum that the government could legally confiscate them. Either they gave up polygamy and followed federal laws, or their entire society would be systematically wiped out. The government was seasoned in cultural genocide by then, and wanted to put an end to crazy marriages and their Nation of Deseret idea. His hands tied, the church president put out a “manifesto,” saying everyone should “follow the law of the land.” People like Mattie were devastated to see their sacrifices had led to nothing. 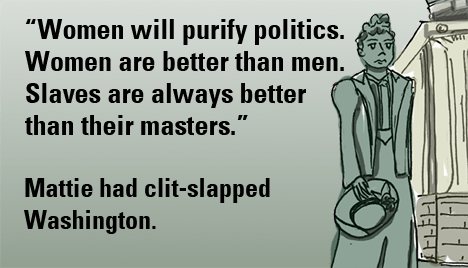 Mattie moved back to Salt Lake shortly after the manifesto, and went back to being the best doctor in the known universe. She also officially became a suffragette. In 1870, Utah women were given full voting rights, because everyone thought women voting would mean polygamy would end. But women voted for polygamy, so the feds passed the dick move Edmunds-Tucker Act of 1887 and repealed women’s suffrage in Utah Territory. Mattie never took the backseat to anyone and joined up with a huge group of women ready to fight. She became a featured speaker (that oratory degree came in handy) and in 1893, went to the Chicago World’s Fair and declared, “Women will purify politics. Women are better than men. Slaves are always better than their masters.” Afterwards, she went to Washington D.C. and spoke to a congressional committee about granting women the right to vote. She debated that a woman involved was actually a better mother and created a happier home. “You give me a woman who thinks about something besides cook stoves and wash tubs and baby flannels, and I’ll show you, nine times out of ten, a successful mother.” Mattie had clit-slapped Washington.

In 1896, Utah became an official part of these United States, and when drafting up their state constitution women were right there, including Mattie, demanding that a women’s right to vote be written into the state’s constitution. Also written into the constitution was the outlawing of polygamy (to gain statehood, Utah officials had to agree to make it illegal in their constitution). That November, Utah elected their first representatives and senator to congress. The Democratic Party nominated Mattie. The Republican Party nominated Angus Cannon, her husband. As the Salt Lake Herald put it, “Against him we haven’t a word in the world to say, only we say that Mrs. Mattie Hughes Cannon, his wife, is the better man of the two. Send Mrs. Cannon to the state senate as a Democrat and let Mr. Cannon as a Republican remain at home to manage home industry.” She fucking destroyed him at the polls.

The first elections ever held in Utah and they had put a woman on the senate and two women in the House of Representatives. Mattie put it best, “One of the principle reasons why women should vote is that all men and women are created free and equal. No privilege class, either of sex wealth or decent should be allowed to arise or exist. All persons should have the legal right to be the equal of every other.” It would be another twenty-five fucking years after her election that all American women were finally granted the right to vote. Weird religious polygamists who believe Jesus strolled through America after his resurrection recognized women as capable humans, but assholes in Washington were still following our precious founding fathers or some idiot garbage.

I want this to be the happy ending, but it wasn’t. Mattie served two terms and helped create the Board of Health in Utah, as well as nationally. But she got pregnant and gave birth at the end of her second term—proof she was still practicing polygamy. It ended her political career, and she went back to keeping the world healthy, albeit quietly. She moved to Los Angeles, where two of her children were living, and died in 1931, at the age of seventy-five.

She faced hardships most of us will never know and accomplished more than many of us could even dream of doing. I leave you with some of her best advice: “Let us not waste our talents in the caldron of modern nothingness, but strive to become women of intellect and endeavor to do some little good while we live in this protracted gleam called life.”

Forever dedicated to my girl, Mattie.

Donna Ramone is really into murders but not murdering.
[email protected]
donnaramone.tumblr.com/