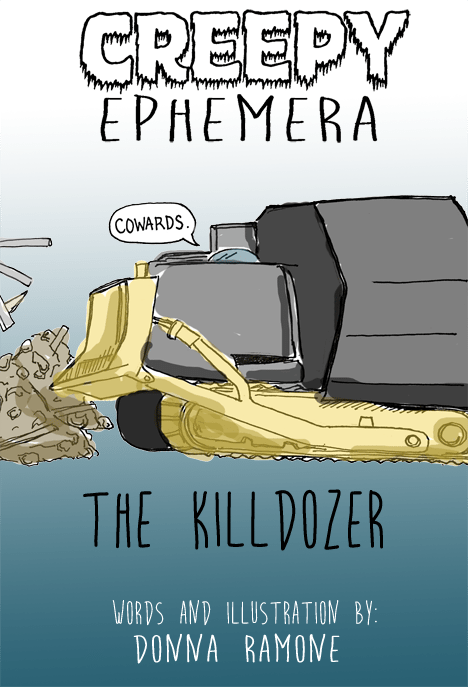 Creepy Ephemera 4 - The Killdozer: A webcolumn about the weird

“You meddled in my business, and took what I deserve away. You took advantage of my good nature. And another thing you should learn is that when you visit evil upon someone, be assured it will revisit you and that is what is happening.”

Those are the immortal words of Marvin Heemeyer, from his recorded manifesto. He later took an impenetrable bulldozer he had secretly built and nearly leveled his entire town. Precisely what you do when you have God on your side and some people were total dicks to you, right?

But how does someone get to the point where they build a Killdozer? Well, this yellow brick road is paved with mufflers. In the early 1990s, Marvin Heemeyer moved to the tiny Colorado town of GrandLake; population of about 450 people. He started a small chain of muffler repair shops, particularly one in Granby, less than twenty miles away. People described him as a terrific friend, albeit with a temper. He wrote his own newsletter about his views on politics, especially about how much he wanting gambling legalized. A newspaper interviewed him about his pro-gambling stance for an editorial, but when the reporter started reading points made by the opposition so Heemeyer could comment on them, he lost it and tried to beat the shit out the reporter. Another time, when a woman refused to pay for a muffler job she claimed he botched, he threatened to kill her husband. But that’s just Marv for you—don’t take no shit from no one.

Early on, Heemeyer bought two acres of land next to his main muffler shop from a federal agency for $42,000. He was later approached by the Docheff family, who wanted to buy the land and build a concrete plant. They agreed on the price of $250,000 but according to the family, he changed his mind and wanted $375,000, and then later started saying he wanted one million dollars. The Docheffs gave up talking toHeemeyer. They went to the city council about rezoning the property instead.

In 2001, Granby’s zoning commission and trustees approved to have a cement manufacturing plant built adjacent to Heemeyer’s muffler repair shop, despite Heemeyer showing up to all the city council meetings, probably pissed about never receiving a million-dollar deal. He was also using that land to get in and out of his muffler repair shop and the plant would close him in. His appeal against the construction was denied, and because kicking an angry animal is always the best plan, the town decided to fine him $2,500 for bullshit minor offenses, like having junk cars on his property and not being hooked up to a sewer line (was he shitting in a hole? Who’s to say). He attempted to get a petition with signatures from the community, asked if he could build a road to his shop, and tried get permission to cross eight feet of the cement plant’s property to hook up a sewer line. Everyone denied him.

Heemeyer, however, wasn’t one to accept defeat.

Heemeyer sent in a $2,500 check for the fines, with “cowards” written on the memo line. He had bought a bulldozer to build a road so costumers could access his repair shop, but its construction hadn’t been approved, and I’m guessing all bulldozer sales are final. He leased his shop to a trash company and then eventually sold the property. The new owners gave him six months to move out, but Heemeyer did the exact opposite and holed himself up in there with his bulldozer. Whatever was holding him together finally unraveled. Somewhere inside his “Give me a million dollars and read my political newsletter” brain a voice told him to start building. The lord’s voice. He’s was a mission from God, and we all know how well those stories end. (The Blues Brothers being the one exception.) 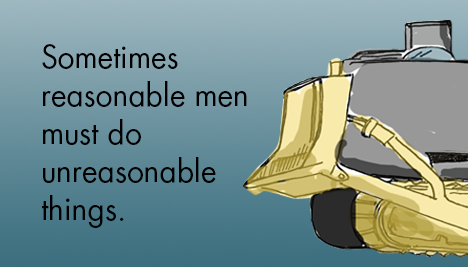 “I was always willing to be reasonable until I had to be unreasonable. Sometimes reasonable men must do unreasonable things,” Heemeyer scribbled on scrap paper later found in his work shed. But he had a knack for more than clichés and rambling manifestos; he was also a wizard at building death machines. Whoever bought the property must not have checked up on it because Heemeyer was in there for a year and a half. He started modifying the bulldozer by first armoring it with thick slabs of steel, adhering them to the vehicle with large amounts of cement. In some places, the steel was a foot thick. That way the engine and tracks would be protected and it could withstand things like really big bullets or little bombs. He installed front and rear cameras wired to several monitors inside the cabin, to see where he was going. The cameras were protected on the outside by three inches of bullet-resistant plastic. Compressed air nozzles were fitted to blow dust away from the camera lenses. Fans and an air conditioner were set up in the cabin, as well as an air tank for circulation so Heemeyer wouldn’t get sweaty doing the lord’s work. There were three gun ports for a sniper rifle, another high-powered rifle, and a semi-automatic boomstick (confession: I have no working knowledge of gun vocabulary), all protected by a half-inch steel plate. Water and snacks were well stocked in the cabin, because he would need those Capri Suns and orange slices at halftime to keep going.

Several friends visited him to see how he was doing, but, according to Heemeyer, despite having part of the bulldozer in full view, no one saw it. He tried to get caught and nothing happened, which logically means God clouded their eyes so he could continue with his mission. “God blessed me in advance for the task that I am about to undertake. It is my duty. God has asked me to do this. It’s a cross that I am going to carry and I’m carrying it in God’s name.” These insightful quotes are not from the Bible, but from Heemeyer’s written or recorded manifesto. It lays out his motive for his dozer attack, but it’s really just a diary. It’s full of his feelings and thoughts, with the thesis being that he’s right, they’re wrong, and God is on his side. He mailed the nearly three-hour recorded message to his brother, who promptly gave it to the FBI because it’s three hours of someone talking out the justification for a killdozer. 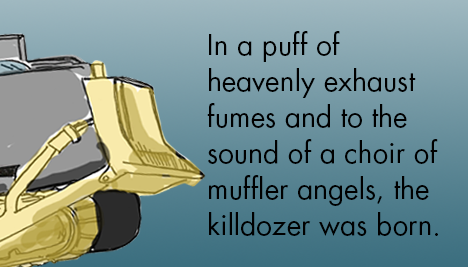 Unfortunately, 2004 wasn’t a good year for Heemeyer. His father died and he caught his fiancée boning another dude. So on June 4, he woke up, mailed his manifesto tapes to his brother, and grabbed his handwritten list of targets. He lowered and attached the final thirty-ton top armor. In a puff of heavenly exhaust fumes and to the sound of a choir of muffler angels, the killdozer was born. He entered the bulldozer, welded himself into the cabin, and at about 3 PM, drove through the side of the shed, and smashed into the cement plant. Within several minutes, two cement plant buildings and a pile of cars were destroyed. A Docheff family member started yelling, but took off after being shot at from one of the gun ports and called 9-1-1. Then the killdozer rumbled towardstown.

Cops were on the scene immediately but couldn’t actually do anything. One officer unloaded nearly forty bullets from his handgun into the beast with no effect whatsoever. Other officers tried to climb the dozer to find a way to stop it, but Heemeyer had planned for this and had coated the entire thing in oil. They slipped right off like bumbling cops in a cartoon. Realizing bullets were having absolutely no effect, they brought in some explosives. One officer dropped a flash grenade down the exhaust pipe. The explosives did nothing and the divinely protected killdozer rolled onward. Police then focused on warning the entire town to get the fuck out of Heemeyer’s way. Once everyone was clear, they got a large scraper to try and mecha-battle the killdozer, but were easily shoved aside as Heemeyer kept going. 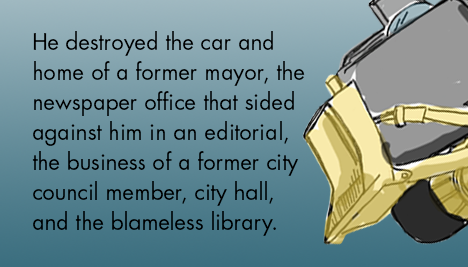 Not one to go cruising, Heemeyer swerved around and made wide turns, trying to control the top-heavy bulldozer. Nevertheless, he was able to aim for all his targets. He destroyed the car and home of a former mayor, the newspaper office that sided against him in an editorial, the business of a former city council member, city hall, and the blameless library—eventually destroying thirteen buildings over a two-hour rampage before heading for Gamble’s Hardware store. Heemeyer had sued the owner of the store at some point and was, surprise, still angry. About this time, authorities were seeing if the Air Force might stop by with an anti-tank missile to stop the divinely unstoppable. Cops and SWAT had been following the bulldozer all this time, occasionally firing so they could feel like they were doing something.

Heavy exhaust and fluids started to leak from the dozer as it went crashing into the hardware store. The weight of the thing had started to take out the engine. At the same time, the front end of the destroyer broke through the floor and into the shallow basement of the building. The engine was failing, the dozer was stuck, or both. As police and SWAT surrounded the weakened beast, a single muffled gunshot was heard within. After two hours and seven minutes and roughly seven million dollars in damage, the killdozer’s mission was over.

Despite the rampage ending, no one could get into the vehicle. Explosives still didn’t work, so it took twelve hours with a specialized torch and a crane to crack open the armored top. Inside lay Marvin Heemeyer, dead from a single self-inflected gun shot from a handgun he had packed in with him. He had every intension that this would be his final ride.

In the end, no one was injured. People still debate whether that was part of Heemeyer’s plan or proper planning by the police, especially since he had three mounted guns and a hit list with people’s names on it. Of course, pro-gun, anti-government online voices call him a “hero, patriot, [and] martyr” and think, as a nation, we should celebrate the day he destroyed everything and killed himself. The Shorebirds wrote a great song about him. The bulldozer was reduced to scraps and scattered between different landfills to deter collectors and destruction enthusiasts.

On the one hand, Heemeyer was anti-establishment and punk as fuck. But on the other hand, he was also a crazy person who thought God was guiding him into making a killdozer, which he then used to level an entire town full of people who didn’t all deserve it. Personally, as someone who constantly researches weird history, there is no greater evil deed than the destruction of a library.

This article is dedicated to Marv. Maybe. Actually, no, I take that back.

And any and all fan videos on Youtube, especially the ones synced with metal songs.

Donna Ramone is really into murders but not murdering.
[email protected]
Donnaramone.tumblr.com