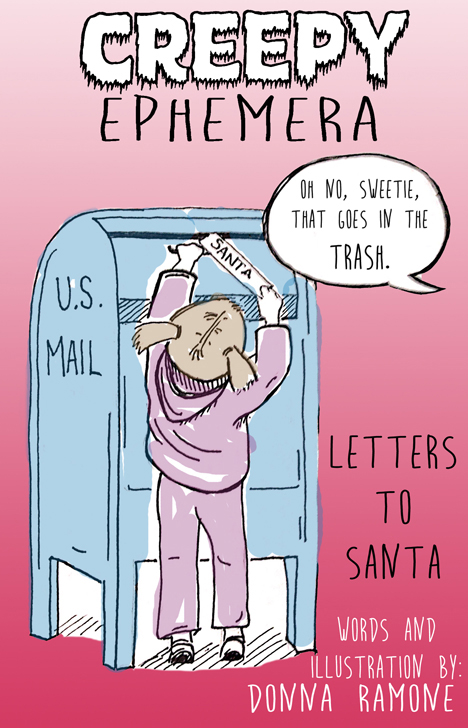 Creepy Ephemera #3: Letters to Santa: A webcolumn about the weird

There’s two things I’m willing to admit openly because “Ramone” is not actually my last name: I work for The Man, specifically as a postal employee, and I cannot stand Christmas. This month, I am in my own personal hell since work (and, honestly, life) is infinitely more stressful and shitty than it ever is the rest of the year. The majority of mail is electronically read by computers, but what cannot be read is sent to where I work, where over a thousand employees look at all the unreadable scans and type in the address manually. I spend forty hours a week typing out Amazon orders and shitty calligraphy attempts on Christmas card envelopes, but nothing annoys me more than letters to Santa. Call me a miser, or a scrooge, or a total child-hating dickhead (in all cases, you would be correct), but seeing a badly scrawled envelope with the words “Santa Claus, North Pole,” usually leaves me angry enough to vomit blood. Like it or not, there is no goddamn Santa. 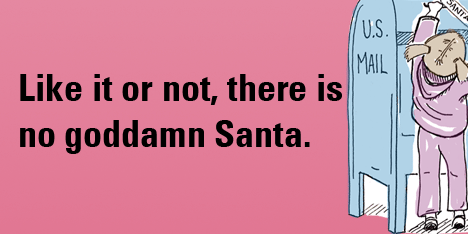 Though family Christmas movies refuse to accept this reality, we all know Santa is not real. He isn’t an actual magical being who skips over the non-Christian part of the world to give the Christmas-celebrating “good” kids garbage from Toys ‘R’ Us. He’s just a retiree at the mall. So what happens to all those stupid letters people actually stamp and then drop into a mailbox? Well, if it’s an actual address, I type in that address. If it’s in New York and addressed to “Operation Santa Claus,” that is the real-life Santa Mail answering service for the state of New York. But if it says “North Pole” then I type in the zip code for the North Pole: 99705-9900.

That’s right kids! Santa is a jolly white American man, residing in the Republican-leaning suburb of Fairbanks, Alaska. A make-believe wonderland with a population of about two thousand, the town is Christmas themed year-round and their claim to fame is the world’s largest fiberglass statue of Santa outside of Santa Claus House, which is marketed as Santa’s actual home. Of course, tourism makes up a lot of their economy. One of the first Santas of North Pole was actually the mayor, Con Miller. Santa was the mayor of the North Pole—can you believe it?

In Jon Ronson’s book Lost at Sea, he writes about his visit to North Pole where he found a community where people “believe” in Santa and expect the same jolly spirit from everyone, which leaves the children of North Pole a little confused. Because it’s the sixth-grade children who are responding to the Santa mail sent there. It’s actually part of their middle-school curriculum to spend a month responding to letters, and sometimes dress up to do it. So handwritten letters being sent to children from “elves” with funny names are actually just being written by other older children. What’s worse is everyone is just expecting these sixth-graders to understand what they’re doing and why it’s important, without ever having the important “Santa isn’t real” talk. As Ronson notes, “This might be the least rational place I’ve ever been to.”

Letters addressed to Santa from children date back to the mid 1800s in America, and everyone seemed fine with putting them into the dead letter pile and destroying them—until 1906, when the New York Times called out the then-named Post Office Department with the headline, “The Post Office Department does not believe in Santa Claus.” The Times went so far as to blame the postal service for children not getting the presents they asked for, simply because they never gave their letters to Santa (who, I would like to once again point out, does not fucking exist). Other newspapers picked up the same story and hounded then Postmaster General, George von Lengerke Meyer, the same way most people hound anyone without the “Christmas spirit.” December 14, 1907, a fed-up Meyer announced that any volunteer groups approved by local postal offices could respond to Santa mail for the rest of the month.

Volunteer Santa letter groups quickly formed in major cities across the country, writing back children, and delivering toys, good cheer, and the lie that magic is real. Newspapers printed the saddest stories or the ones with the cutest spelling errors. Some towns even had dudes fighting to play Santa and personally deliver presents to homes. Normally, anyone would consider this a wonderful, charitable gesture.

Except, actualcharities were horror-struck. Organizations like the Children’s Aid Society and the Association for Improving the Condition of the Poor worked hard all year, with purpose and structure, to give families better lives. Children receiving toys from Santa once a year would not significantly help their situation. Charities were also worried this would teach impressionable children to lie to get better stuff from Santa. Or worse, parents and older siblings coached kids into writing whatever they thought would get them to look the most needy. The most poor aren’t going to write in, they argued, because, “nine times out of ten, the really needy poor do not bring their wants to the attention of the public.”

Before the Christmas of 1907, W.F. Persons, superintendent of the New York Charity Organization Society, personally wrote Meyer about these worries and struck out to conduct his own investigations. He sent volunteers to investigate letter writers who seemed like cheats, and in a lot of cases found either exaggerated claims or a family already receiving assistance from another charity. Persons collected his findings and submitted them to Meyer, who was probably completely over Christmas by this point.
The following holiday season of 1908, Meyer cancelled the Santa mail program, and the newspapers and public whined about it harder than they had the year before. Meyer didn’t need this headache anymore and letters to Santa were destroyed as dead letters until he retired a couple years later. His successor, Frank Harris Hitchcock, was hit with the same controversy and he quickly relented. In November of 1911, Hitchcock had the Santa Mail program renewed.

Charities were upset all over again, but Hitchcock was a savvy business guy who understood marketing and erred on the side of public opinion. Who cares if someone is working the system for free stuff, “To send these appeals to the Dead Letter Office…seemed to be a cold and heartless thing,” was the reply from assistant postmaster general James Britt, on behalf of his boss. If charities continued to fight against the Postmaster General’s stance, they would look like cruel assholes and knew it. Sadly, the charitable organizations accepted defeat, and instead worked to inform the public on how to help responsibly.

The Letters To Santa campaign still exists today, over one hundred years later, and hasn’t changed much. Postal employees open, catalog, read, and copy the letters, then remove the personal information. The copies are then left out in an “adoption” bin at participating post offices. If you’re interested, you can respond to up to ten letters with notes and gifts. My facility has a tree covered in paper ornaments, each with a child’s gender, age, and gift wish on it. (I tend to look for the little girls asking for science kits. I’m not a complete monster.) 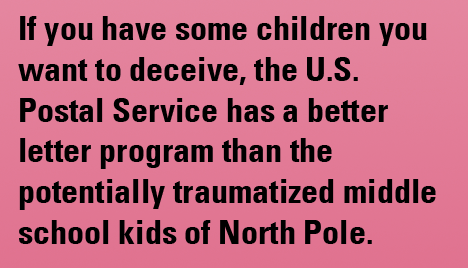 Or, if you have some children you want to deceive, the U.S. Postal Service has a better letter program than the potentially traumatized middle school kids of North Pole. Mail a packet to the Anchorage, Alaska postmaster with a self-addressed, stamped envelope containing a letter you wrote from “Santa” and they will postmark it with a stamp from “North Pole” and mail it back to your home, allowing you to have proof to back the lies we’ve all been feeding America’s children for centuries.

Better yet, do all my co-workers and me a favor and just hide those letters kids write and scrapbook them for memories. And if you must create some return letters, it’s 2014 and computers exist, Emperor Pants-On-Fire—photoshop a postmark and fake it yourself.

Or just tell them Santa isn’t real, because he fucking isn’t, and lying to children is a terrible thing to do.

This article is dedicated to the Dead Letter Office, which no longer deals with Santa mail but still regularly burns all the letters addressed to “God.”

Bio: Donna Ramone is really into murders but not murdering.
Email | Tumblr