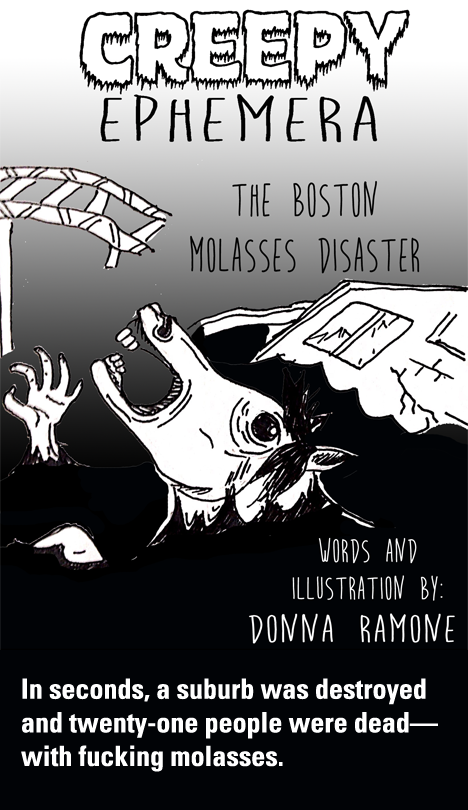 Creepy Ephemera #2: The Boston Molasses Disaster: A webcolumn about the weird

Boston Public Library collection of photos of the disaster.

Being buried alive is a common phobia.

Drowning is also a healthy fear to have.

Suffocation is usually in the top five of every “Most Terrible Way to Die” listicle.

So imagine my anxiety researching a topic where nearly two dozen people died by all three at once. For someone who spends a significant amount of time researching terrifically awful murders and deaths, you may be wondering what could possibly cause that anxiety, and in turn, this article. It was this: a giant sudden flood of molasses. A nightmarish, twenty-six million pound, dark, sweet, sticky wave that moved fast and killed everything unfortunate enough to be standing in its path. No one saw it coming and nothing stood a chance against it. In seconds, a suburb was destroyed and twenty-one people were dead—with fucking molasses.

These days, molasses is this clothes-ruining goop that goes in gingerbread  and… uh, probably some other things I’m unaware of. But before refined sugar was a commodity, molasses was the sweetener used in most methods of cooking, but more importantly, it was fermented and distilled into rum, for boozing, as well as ethanol, which had more practical uses—in particular, it was used in munitions manufacturing, which had becoming a booming business after WWI. Ha, “booming”… as in—heh, you get it.

In the busy, blue-collar, English cap-wearing, Dropkick Murphys’s dream that was early 1900s Boston, the United States Industrial Alcohol Company had set up a lucrative business in the industrial North End, and at the top of the hill was the molasses reservation tank. It held about 2.5 million gallons of molasses at any given time, and was a giant steel tub, fifty feet high and ninety feet in diameter, riveted together across its belly and generally looking like a sound and strong structure. That is, until the winter of 1919. Boston is a cold place, so temperatures had dropped down to the zeros for most of the week. But on this beautiful morning, the temperatures had risen to the mid-forties. This will come into play later.

Just past noon on January 15, 1919, a loud sound like a shotgun blast went off, startling workers on their lunch breaks and housewives hanging laundry. The tank hadn’t just ruptured, but exploded, shooting shrapnel in every direction. Within seconds, the entire tank of molasses was gurgling down Commercial Street, the main road that ran through the middle of the suburb. The wave reached fifteen feet high and 160 feet wide, according to witnesses, and came rushing at thirty-five miles per hour through the area. But this isn’t water, this is molasses, and that much molasses is incredibly thick and heavy. People were either slammed into buildings or held under the weight of it before even comprehending what had occurred.

It seemingly grabbed and threw people and buildings alike. It ripped out structures from foundations easily. The rivets from the tank hit nearby homes like high-powered ammunition, smashing through walls. A large piece of the tank had blown out and snapped the support girders on the elevated railroad tracks in half, causing the center to crumble. The oncoming train’s conductor luckily saw the wave and stopped just before the train would have been thrown off the tracks. He then took off running up the track to warn the next train. Telephone and electric poles dropped like toothpicks and their wires snapped, leaving them sparking on the ground. A small boat was tossed through a wooden fence like a battering ram. The wave grabbed a railway car and threw it into a ten-year-old, instantly killing him.

The fire station was immediately in the path of the wave and three firefighters still inside fought to keep their heads above the growing tide that was impossible to swim or float in. A man was pinned three feet off the ground against a building unable to move, and while there he watched horses in the street scream as they were crushed and drowned. Many animals, especially horses hitched outside or in stables, either suffocated or were trapped in molasses that came up past their chests and were unable to escape. People were being smothered and crushed and drowned, feeling the sticky syrup seeping in as they struggled to breathe. In all, twenty-one people died and 150 were injured within a couple minutes of the tank rupturing.

The first on the scene were over a hundred sailors stationed near the wharf. Next, the police and the Red Cross arrived. People were being pulled out of the molasses as rescuers tried desperately to get the heavy slime from out of their mouths, nose, ears, and eyes, reaching in with fingers or using their clothing as rags. A makeshift hospital was set up near the waterfront, with volunteers trying to get those soaked in the brown syrup breathing. The Boston Post reporting on the event said, “Those already on duty were soon covered from head to foot with brown syrup and blood. The whole hospital reeked of molasses. It was on the floors, on the walls, the nurses were covered in it, even in their hair.”

Molasses is dark, so buried bodies couldn’t physically be seen to be recovered. The last victim wasn’t found until eleven days after the tank broke. Cops went around to find horses stuck in the molasses, and shot them if they were still alive but too stuck to be safely pulled out. People tracked molasses all over the rest of Boston while moving in and out of the North End, trying to help with disaster efforts. Workers had to saw and chisel off the hardened areas while the rest was washed out with seawater to the wharf, which was stained brown until summer. In all, it took approximately 87,000 man-hours to clean the North End, but by this point, all of Boston smelled of molasses.

A little science: Molasses is a non-Newtonian fluid, meaning the forces applied to it determine its viscosity. You might have played with a mixture of cornstarch and water in a science class, where if you slowly pushed on it, your hand would sink into the fluid but if you quickly punched it, it would react like a solid wall. Or think of ketchup or toothpaste, where if you tilt the bottle it doesn’t move much unless you apply force by squeezing it out. So if you’re hit with fast-moving molasses, it hits like a solid wall, but as it settles, it will flow and cover you.

It’s also impossible to swim through molasses, for two reasons. The first is the Reynolds Number, which determines the flow of a fluid within or against a structure (water in a pipe, for example). A person in water has a Reynolds Number of about a million. A person can still swim in a liquid up to 1,000. Molasses, however, has a Reynolds Number of 130. The second reason is the way a person swims. As you pull your arm back, the molasses would flow back but once you moved your arm forward again, the molasses would flow forward again with your arm and prevent you from propelling. If you end up trapped in molasses, there’s a good chance you’ll die.

The United States Industrial Alcohol Company (USIAC) were big business bad guys and immediately blamed the Italian anarchists in Boston, the racial scapegoats at the time. Witnesses heard a blast, which they claimed must have clearly been a bomb. Obviously, the only people with copies of the not-yet-existent Anarchist Cookbook who also hate capitalist America are those handsome foreign intellectual Italians. The USIAC insisted on this story up until they were taken to court, when over a hundred civil suits had been filed against them. Turns out, the tank was finished and filled with molasses within three days and was never actually tested. It also leaked constantly, so people in town just filled cans for their homes for free and kids would make molasses suckers with sticks before playing with a barrel ring in the street or going to work in unsafe factories. Everyone had the suspicion that the tank was not fit to hold that much molasses, but the USIAC still swore it was the anarchists. A ruling wasn’t reached until 1925, making it the longest and most expensive civil suit in Massachusetts’s history.

After a great deal of time and money and interviews and lawyering, the prosecutors had amassed a lot of evidence proving the metal of the tank was too thin and the riveting was too far apart. The sudden increase in temperature that day may have also heated the molasses, causing gases inside to expand, resulting in enough pressure for a sudden explosion. The defensive USIAC said they received a telephone threat once in 1918, saw some anarchist leaflets in town, and claimed they found a bomb at another facility in 1916, but they didn’t actually have any evidence and were also probably shitty humans and racist. They opted to settle out of court and paid more than $300,000 in damages to the city, railway, and families. In today monies, that’s about thirty million dollars.

Afterwards, a Massachusetts law was passed requiring an engineer and architect investigate all new construction, and the inspection be documented with the city. Shortly afterwards, most states passed similar laws. The USIAC never rebuilt the tank, but the following year Prohibition happened, so their business was fucked anyway. Where the tank once stood is now a pretty park with a playground. And nearby is one of my favorite things in the world, a historical plaque, remembering the events of what was later dubbed the Boston Molasses Disaster.

Urban legend claims that even now on a hot summer day with the wind just right, you can still smell the sticky sweetness of molasses in North End.

This article is dedicated to everyone involved in this tragedy, except those assholes with the USIAC.

Bio: Donna Ramone is really into murders but not murdering.
(Email | Tumblr)