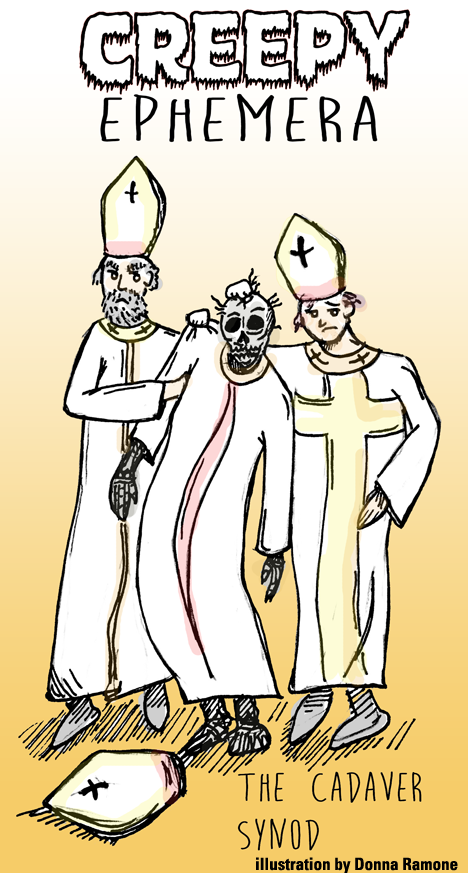 Papacy is weird. There are so many insane legends and stories within the history of the Catholic Church that it’s hard to pick only one as my inaugural webcolumn—only, it isn’t. Because, one time, a pope put the previous pope on trial. “But how were there two popes around for one to put the other on trial?” Easy. He dug up his dead body and put it in the courtroom (Law & Order sound effect: DUN DUN).

I’m now setting the Wayback Machine for the Iron Age of Papacy, the mid-9th to the mid-10th centuries. Roman families were fighting for power, and there was no greater power than running the Vatican. To get themselves and their allies into more power they simply did what anyone does: steal, rape, and murder. That’s right; popes were constantly getting axed during this era. From 872 to 965 there were twenty-four popes, nine of which came in and out of power between 896 and 904. For reference, in the 20th century there were only nine popes, and one of them only lasted a month. As much as killing a pope is a super sin, no one really had any issue with making it happen. Many were poisoned; and, if the poison didn’t work fast enough, they were hit repeatedly in the head with a hammer (RIP John VIII), and some were smothered with pillows. Another was either killed by a stroke while boning a married woman or beat to death by the married woman’s angry husband. One poor pope had his eyes, nose, lips, tongue, and hands removed and eventually died from his injuries.

The popes at the time were fucked up, too. Like, this one pope who ordered the murder of another pope, and then had his illegitimate son become pope after him. Once, some dummies even made an eighteen-year-old pope. With this madness happening, you can see why a corpse might need a lawyer.

Our story begins with Formosus, an old guy who only got in five years of poping before he died in April of 896. During his short reign, he managed to really piss off some people by supporting a campaign to overturn the Holy Roman Emperor at the time, because he was a dick. Then the emperor died. Formosus named a new emperor, but that guy got paralysis somehow and also died. In April of 896, Formosus died, but unlike most popes of this era it was from being eighty years old. His successor was Boniface VI, but he only made it fifteen days before dying. Historians currently guess that it was gout, but during this era, it could have easily been “gout.”

Enter Stephen (VI) VII, Boniface VI’s successor, total asshole, and probably crazy person. Before Formosus’s body was cold, riots had broken out in Rome. The Holy Roman Emperor had died while his heir was still a child, and the pope had died, too. A lot of power was up for grabs and the wealthy ruling families lost their collective shits. The rioters characterized themselves as either feverishly Pro-Formosus or rabidly Anti-Formosus and the new Pope Steve was part of and backed by the Anti-Formosusians. So, being a crazy person, Pope Steve had the seven-month-dead Formosus dug out of St. Peter’s Basilica on charges of perjury, coveting the papacy, and violating church canons in January of 897.

The trial in Alice’s Adventures in Wonderland plays out like an Emmy-winning courtroom drama compared to this shit show. First off, Pope Steve pulls out a throne, brings it to the courtroom, and makes himself judge and prosecuting attorney from his big-ass throne. The co-judges and clergy present were all forced to be there, so they were scared and upset and I’m sure at least one peed a little. Pope Steve demands Formosus be pulled out of his less-than-final resting place, put in full pontifical vestments (those are the fancy embroidered church ponchos you usually see) and placed in a chair in the courtroom for the entire preceding. A terrified teenage deacon was appointed as defending attorney on behalf of Formosus. Given, court proceedings in Rome during the 9th century were nothing like American court proceedings today, but you still didn’t bring actual dead bodies into them. 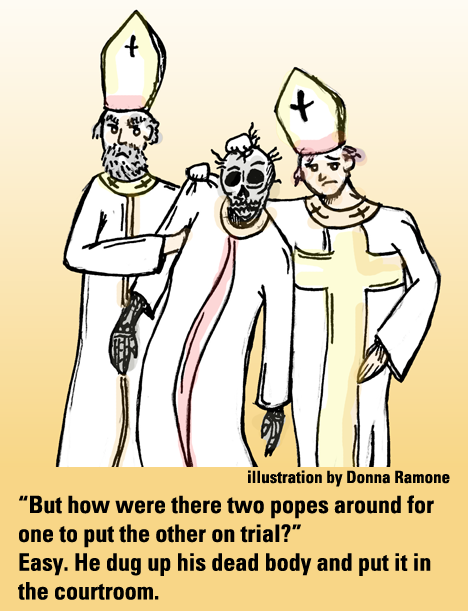 Pope Steve took over the trial with his loud screaming and flailing and tantrum-throwing. He screamed and insulted the corpse of Formosus as loudly as he could and made a really big production of how much he hated him. When he would eventually stop to catch his breath, the teenage defender would deny the charges, which would set off Pope Steve on another tirade, just as loud and scary. This continued in a loop for the (thankfully) short trial, until the end of the whole ordeal when Formosus was determined to be guilty by the raving Steve. He was sentenced to a full de-poping, which invalidated all of Formosus’s acts and ordinations as pope, stripped him of his vestments, put him in gross poor-people clothes, and buried in a mass grave. Oh, and he had the three fingers on his right hand used for papal blessings hacked off. No word on if scary-tempered Pope Steve also ate said fingers in a rage—but if he had, not a single person would be surprised. The whole affair was dubbed the Cadaver Synod, a synod being either a council of church leaders or a formal gathering of church leaders.

This is not even close to where the story ends.

Formosus was tossed into a common grave, as sentenced, but for some reason that wasn’t enough. Anti-Formosusians dug him up again, weighted his body and chucked it into the Tiber River. Legend has it, the body managed to wash up on the shore of the Tiber and started performing miracles, and a monk collected the body for safe keeping. The public opinion had shifted completely against evil crazy Pope Steve, for being so evil and crazy. There was a palace revolution shortly after all of this that ended in Pope Steve getting deposed and being imprisoned with only the modest robes of a monk. But to keep with the theme, by August 897 he was strangled in jail.

Pope Theodore II was only pope for twenty days in November of 897, and used his papacy to annul the Cadaver Synod and reinstate Formosus. Under Pope Teddy’s order, Formosus’s body was given back its vestments and was returned in a solemn procession to St. Peter’s Basilica, where Teddy lead the mass while his body was returned to his original tomb.

After Teddy was Pope John IX. He was pope for less than two years in 898, and also annulled the Cadaver Synod by confirming Pope Teddy’s decision in two other synods and henceforth prohibited the trial of a dead person.

Sergius III, pope from 904 to 911, reversed John Boy and Teddy’s decisions and reaffirmed Formosus’s conviction. He also added an epitaph to Pope Steve’s tomb that essentially read, “You were the coolest, and that dickbutt Formosus was the worst.” Pope Sergie was actually one of the co-judges in the clergy at the Cadaver Synod, and was backed by the—you guessed right—the same Anti-Formosusians as the backers of Pope Steve. Sergie was also the only fucked-up pope to order another pope killed, and had his illegitimate son also become pope (there’s a callback).

That’s where the official decrees involving the Cadaver Synod end, but that’s not the final standing. The church shortly afterwards, until today, believe Formosus was a pretty solid pope who did good pope work. He’s still buried in his tomb in St. Peter’s and is generally considered a sad victim of power-hungry circumstance. If this story had an executive producer, it would be Dick Wolf.

This article is dedicated to all the nice dead popes who did nice things.