Review and Pictures by Eric Rife

(Note: Due to my work schedule, I missed the two opening bands, of whom, I was told, were quite good. I regret missing them and apologize for not including them in this review.)

There’s never anything particularly new about the Cramps. Their primitive, tiki-toned, voodoo punk which evokes damn near every second-rate garage band of the ’50s and ’60s, is responsible in large part for the recent stripped-down-blues-filtered-through-an-aging-Vox-tube-amp revival ala Bob Log III, Devil Doll, Soledad Brothers and most famously, the White Stripes. But would you really expect, or more importantly, want to hear the Cramps do anything else? 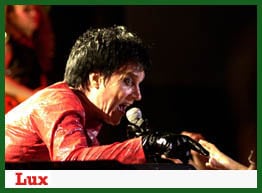 Indeed, lead vocalist Lux Interior got the crowd to boo along as he proposed a battle of the bands with White Stripes, who were ostensibly hovering over stage left. When Jack and Meg failed to materialize, the booing grew to a din, drowned out only by the next song. Lux has probably given more head to more microphones than any man alive and as always, looked AMAZING in his reddish, skin-tight catsuit, adorned with a frilly jacket. Guitarist Poison Ivy Rorschach looked stunningly aloof, her red mane teased up to new, dizzying heights, while her hands glided effortlessly over her beautiful, trademark Gretsch.

The evening saw a healthy serving of tracks from the band’s latest album, Fiends of Dope Island, which features the always amazing Kid Congo Powers on guitar (he was not to be seen this night however). New bassist Scott “Chopper” Franklin and drummer Harry Drumdini provided as solid a rhythm section as the band has ever had. 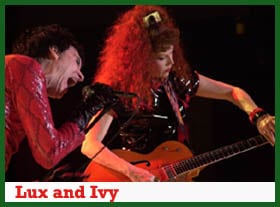 Some in the audience were no doubt disappointed that much of the Cramps’ best work went unplayed (“Goo Goo Muck,” “What’s Inside a Girl,” “Can Your Pussy Do the Dog?”) while special preference was given to newer material like “Big Black Witchcraft Rock,” “Mojo ManfFrom Mars,” “Color Me Black,” and “Papa Satan Sang Louie.”

Highlights included, as always, a plethora of obscure covers including the Wailers’ (from Tacoma, not Kingston) “Hang Up” and the Count Five chestnut, “Psychotic Reaction.”

LAST RESORT, THE: A Way of Life—Skinhead Anthems: CD