I headed over to Bender’s on Saturday with much excitement and high expectations about the Born/Dead (http://www.myspace.com/borndeadpunx) show. I’ve seen them before and I really liked them but it was only a few months ago that I actually got their latest record and became totally enamored of the song “Eulogy” (seriously, check it out. It is so-o-o-o good!!!). I was psyched!

Bender’s had a fire sometime last year but re-opened in December. I’d only been there once or twice before so I don’t know if it’s a lot fancier now or what (it didn’t look any different to me!). I thought for sure the show would have already started by the time we got there, but they were “running a little behind (uh-huh)” and the first band hadn’t even started.

They came on soon enough, though, and I really liked them. Called the Coronados (not sure about the spelling), they’re made up of just a guitarist/singer and a drummer. The first song they played was called, “You Make Me Puke”, and all the lyrics consisted of just that line repeated over and over. I loved it! Totally excellent way to start a set. Ridiculous. Aside from that, I loved the sound of the guitar, which was quite dirty and made me think of Black Flag gorgeousness. The singer spoke with what sounded like an accent, but I couldn’t really tell for sure. He said their bassist got lost in Chinatown, and, although I was pretty sure there wasn’t a bassist actually wandering around Chinatown, I didn’t know if he was entirely joking or what. They didn’t really sound like they needed a bassist!

The drummer clearly hadn’t been playing for a very long time, as I could see the guitarist nodding to him when they were about to switch up, and I could hear a few little mistakes now and again. However, he hit the drums really hard (the set actually scooted across the stage a bit) and he was into it.

During a slower song I felt some massive Ramones comparisons could be made, and occasionally, they reminded me a little bit of Green Day when they have some cajones. One of their other songs was called (something like), “You Need More Coffee, You Look Sleepy.” Nice!

Outside, I ran into the singer and I learned he was from Italy and that he and the drummer had just formed the band three weeks prior. Holy smokes! I found that to be very impressive. I also learned that, so far, they don’t really have a bassist.

Let me say at this point that it was super duper punk rock in Bender’s that night. Spiky hair, spiky belts, spiky jackets, etc. Lots of black. Now don’t get me wrong, I’m not criticizing. Despite the continuing fashion trend in this area (when will it go away?), and the fact that it’s been quite some time since I had a spiky leather jacket myself, I do actually find it to be at minimum totally fine and normal, and at maximum quite cute and appealing. And this crew here wasn’t sporting it in some kind of trendy way at all, that I could see. However, I just mention it because I have noticed in the past that occasionally there can be more emphasis placed on the punk rock look and less emphasis placed on a good sound, some fierce songs, and music. Do you know what I mean? So I think it tends to make me have bigger expectations when bands are really rockin’ the style. I feel like there is more for them to live up to. 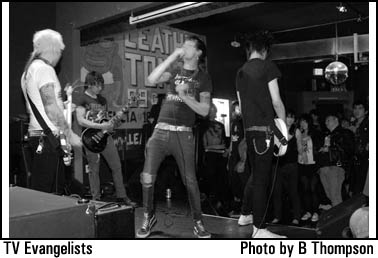 Anyway, when TV Evangelists (funny name) (http://www.myspace.com/tvevangelists) started, the singer came on and threw some “Fuck You’s” around (as in, “Fuck you if you’re going to just stand over there and not dance!”), which I thought that was a little silly, but that’s just me. The guitarist had a Zounds shirt on, which was cool. They were actually pretty good, not just the same old, boring crusty stuff, but for some reason, I wasn’t super into it at the time. It seemed kinda sceney (that’s a new word I just made up. Does it work?), maybe that’s why. Their website is filled with absurdities (loads of gay and genitals references/jokes) and I have no idea what they’re singing about, so I’m not sure where they’re coming from (or if they’re coming from anywhere at all); however, I would check them out again to see how I felt a second time around. Also, they’re young, so I’d be curious to see how they develop. Another also: they have a pretty excellent “Farewell Falwell” shirt. 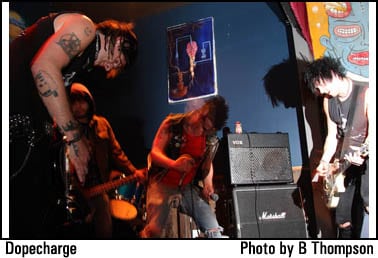 The next band, Dopecharge, also looked ultra punk fucking rock and I was curious to see what they were going to do. I am happy to report that, in my opinion, they totally brought it. Made up of members of Peligro Social, Desolation, and Whiskey Dick Darryls, at times they reminded me of a crustier GBH with two guitars. They were loud as hell, made me ears feel kinda shot, even though I was wearing earplugs. The singer, who tended towards growly death, had two mics, which I’m sure has been done loads of times before, but which I don’t think I’ve ever actually seen. As their set wore on, the floor in front of the stage got sticky with spilled beers from people dancing around. It was fun. I really liked them.

Unfortunately, after Dopecharge it looked like that was it for the bands that night. I’d been a little confused about what was going on when Dopecharge were setting up, as I thought there were only supposed to be three bands (and would have been four with Born/Dead), and, as it turned out, Born/Dead had cancelled. I never did find out the reason. From my end, I’d like to say to Bender’s (and all bars/clubs, really): very helpful if you post this information on the door! It’s likely I would have gone to the show anyway, and it was only $5.00, but someone who paid $5.00 to see Born/Dead and wasn’t told (before paying and entering) that they’d cancelled has every right to be pissed off about it. Also: if you have a website, for god’s sake, use it! Update your calendar! There is nothing on the Bender’s calendar on their website, so why have one at all? I’d much rather see what’s happening on your calendar than pictures of jello wrestling (although perhaps I’m in the minority on that one). I feel like everyone should be well aware of this by now, but for the sake of clarity: Bands playing, time of doors, time of show (If you really want to get fancy, time each band is playing! Man, that would be a heavenly precedent…), cost, ages (21 + or all ages), address. It’s that easy! You can do it!! So please do. Thank you.

STARVATION: Arm Against the Forces: 6”

Resolutions and Lists, Buckets Not Included