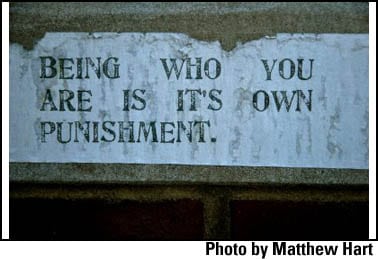 Coming Together: By Matthew Hart

When William first asked me to go on tour with Pangea and Canada’s Tonka & Puma, two thoughts immediately came to mind: I’m going to get to play music with my friends and I’m going to see Her. Actually, a third thought occurred to me too: I will need to buy some vitamins.

Any successful tour is a spiritual/sordid mixture of drinking, bonding, and experiencing the cabala that is live music. The memories—and the messes—we make are indelible cigarette burns on the entwined arms of our camaraderie. I will leave out many and linger too long on others, but that is how stories are told.

We began the tour in Echo Park with a hometown advantage. The Canadians took over the place and left those unprepared babbling and stateless. Familiar faces gleefully bounced around with gleaming tall cans and sweaty brows, leeching the ambivalence from even the most austere hipsters. Everyone was aglow until the taco trucks sung their swan song. All good things get the shades pulled on them.

Our Canadian friend, Airick—A.K.A. Doldrums—came with us in the Pangea car up to the second show in Davis. We talked of urban myths and the schizophrenia of America. Interstate five slowly unraveled itself below our tires and we were soon barbequing in the backyard of a California punk time capsule (To give you some idea of this: I was in a conversation with someone wearing a neon yellow backwards hat and bleached jean cut-offs about the beer, Blatz, which—naturally—led to a discussion of Sewer Trout). The party was more fun than our set. Guinness and whiskey had a lot to do with this. When the show was over, we traipsed through the infamous haunted house and sung songs in a gutted-out bus in the middle of a field. We then all went to a swinging college party where a gentleman fed us Malibu rum and general debauchery took place. We danced, laughed, and fell over. The sun rose on smelly sleeping bags and a lost cowboy hat. Davis is a strange place.

The next morning we headed down to Santa Cruz with eager, albeit dirty faces. J-bird took us to the beach where, Daniel—of Toronto’s Tonka & Puma—read aloud from my copy of Far From the Madding Crowd. After walking around the touristy beachfront and by the famous Lost Boys pier, we got Chinese food and laid down for a much-needed nap. This is where the Black Wizards began to rule the party. A Black Wizard, for those of you unfamiliar with binge drinking, is a Steel Reserve 40oz mixed with coffee. Unable to obtain Steel Reserve, we settled on King Cobra—this unholy alchemy I named a Rusty Battery. When we arrived at the house we would be playing at I noticed that most of the crowd was considerably young. This, in combination with alcohol, meant that there was going to unbridled enthusiasm for everyone who played. And James Rabbit confirmed this with rice crispy clarity. The show was hectic. I somehow managed to step on Erik’s glasses while climbing over him to go dance while we were playing. I paid my penance with a six pack of Blue Moon. After the show was over we were ushered out of the house politely, yet forcibly, into the warm Santa Cruz night. We wound up going to several random parties before the evening ended like they all do: We got weed delivered to us and proceeded to smoke it until the tempestuous Black Wizards in our bellies transformed into sleepy Care Bears.

Our zigzagging route had us in Oakland—a town I once called home for the better part of a year—the following day, where I was most happy to go. I must confess that Oakland will require two paragraphs—one for the events that transpired and another for a brief/ill-advised self indulgence. The house we played at was incredibly cool. It was a combination of a raised main house, a few Tough Sheds, and an old motor home named The Land Yacht. As a bunch of forward-thinking, touring musicians we used the band fund to buy whiskey. I got as drunk as possible and was awkwardly reintroduced to a lot of people I knew a few years back. Before long, it was time to play and I managed not to break anything this time. I did, however, unplug Danny’s bass every time I ran impulsively through the audience. Oakland was a great show for us all. The crowd was great and the people who put on the show were more than accommodating. When our tummies started to growl we ventured out quixotically for a taco truck and actually ended up at a really good taqueria. The tacos were amazing and we were soon in a heated debate over Lady Gaga and the definition of pornography. We slept at the house I used to live at and C.J. Parker rolled us all a spliff nightcap. I believe in miracles.

The main reason I was excited to be in Oakland was to see Her. There are some people in this life that make it all worthwhile. Without her permission I will reprint a letter from me to Her:

I’ve written several letters addressed to you since I left Oakland, but they tended to ramble a bit too heavily on the incoherent side. It appears that my heart and my tongue are attached by some sort of primitive pulley system—the one will only work by the suspension of the other. Regrettably, this means that our interaction is ruled by silence and smiles—perhaps this isn’t so regrettable. Someone told me we were like magnets, which suggests that we can be pushed apart with the same force that we attract—a testament to this is the 386 miles that currently separates us—somebody should be there to record our reunion to prove that magnets can spark.

Out of everything that happened on tour, the few hours I got to occupy the same space as Her were the most memorable. I asked you before, dear reader, to forgive me. Now would be the time. Sorry.

Anyway, the next morning we went to Whole Foods for their gratitude bowl—a dish of lentils, kale, rice, and delicious sauce for a small donation and statement about what you are grateful for. The car pulled out once again on the highway heading south towards San Luis Obispo and the most reckless show on tour. Willie and the people who put on the show had bought a keg of Natural Ice, which brought out either the best or the worst in everybody. Everyone was sitting in a lawn chair or leaning against a car drinking out of a mason jar as the sun set behind the browning hillside. William and I went to the liquor store and picked up a bottle of whiskey for the festivities. By the time we played I was deaf, dumb, and blind. Willie decided that we needed to have a lazy boy chair in the middle of the already impossibly small room as we played. Several people were bleeding by the end of the show. Danny’s pedal and my amp got broken and everyone had a sloppy good time. (When we got back home, Airick’s cut became seriously infected and required medical attention which he could not afford—punk!) Willie also rubbed some dude’s face in his pee like you would a puppy. It was a crazy time.

Things quieted down for a bit as we gathered around the fire singing songs and eating pizza. Then some disturbed gentleman who lived on the roof decided to lose his fucking mind. He started yelling at us and threatened to, “Ruin all of your nights,” and a whole range of other wacky, unprovoked hostilities. Eventually, he calmed down or passed out and left us to reflect on the events of the night and the tour. The Canadians would be heading up to Washington in the morning and we were going back south to Los Angeles. I made a lot of good friends on this tour and managed to lose a little bit of cynicism somewhere along the five.

I said goodnight and finished my last beer before making my place in the mass of sleeping bodies on the living room floor. I curled up in my sleeping bag with my headphones on and fell asleep to an audio book of the Lord of the Rings.

“The road goes ever on and on…”