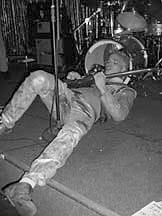 Clone Defects, The, The Starvations, and The Hospitals: June 25, 2003 at Spaceland, Silverlake, CA By Nam

I was doing about eighty on the 5 freeway trying to get my ass home. I couldn't see anything on the road. Then, suddenly, I saw two bright red eyes staring into mine as I slammed on the brakes. I heard the screech of tires and plumes of smoke coming from both sides of my little white sedan. My car shut off for some odd reason and as I saw those red eyes disappear into the darkness, I sobered up and realized it was the brake lights of a gas-carrying rig. I could have blown myself to bits. I started the car again and slowly, cautiously drove home.

Five hours previously I was just pulling into Spaceland. I valet and ran my ass into the club. I don't want to be late - I mean I can't be late. This is the first time I got the opportunity to witness the grand genius that is The Clone Defects. I got a single release from my friend in Detroit. He had produced some of their works. It was called Scissors Chop on the B-side was "15 Minute Love"- easily one of the best songs ever written about the female/male relation. Todd Taylor had also set aside a copy of their brilliant full length in the months to come. It was called Blood on Jupiter and it had changed my perception of music all together in this era of hopeless garage pin-up boy combos and American Idols. 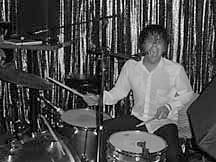 Now there I was in my new wave slut outfit, downing a bunch of rum and diet Cokes and beers. What was I thinking? Well, I saw Defects singer Timmy Vulgar run up onstage in a brilliant silver spray-painted '80s flared shoulder jacket and pants combo. The band ran the crowd into a frenzy of drunken good times with their trademark ear-splitting, sonic reducing arty garage rock - equal parts Killed By Death, Devo, Screaming Jay Hawkins and every goddamn unholy great band you can think of while drinking yourself to a stupor. I met sexy Mario from Rocket From the Crypt while hanging out with the Defects' tour manager - the irrepressible Billy (schhooww! A fellow Horizontal Action correspondent.) This was one of the best shows in Los Angeles this year.

The Hospitals from Portland had that two-man magic formula that seems to be working for the general mass these days. Don't just discount them as just the duo thing because these boys showed much promise after a rollicking set of pared down punk blues with enough energy to set the place on fire. Frantic bands are the best, especially when they choose to set up their instruments on the dance floor as opposed to that daunting stage thing. Plus, the guys looked hot against the silver lame curtains that festoon the walls in Spaceland now. Who fucking decorated this place? A gay astronaut?

The Starvations were in top shape after a long tour around the country. They are one of the hardest working bands in the land as of late. It's good to see these guys on tour. Gabe (the singer) always said touring was like rebirth everyday and it was quite apparent as he has never sounded better and the band was in ship shape despite the sound problems they were experiencing. All in all, it was another smoker of a good time here in Los Angeles, where dreams come true when the nightmares begin.