For a little over a year now, the Sleazies have been spreading their authentic brand of early American punk over the northeast by way of hilarious and high-powered performances. Marked by an undeniable amount of musical capability and witty song writing proficiency, the Sleazies create an amusing and unwearied sound.

After a recent show with the stripped down roots/blues/punk trio the Konks at Boston's Abbey Lounge, I managed to bully the Sleazies into an interview. Here's what happened… 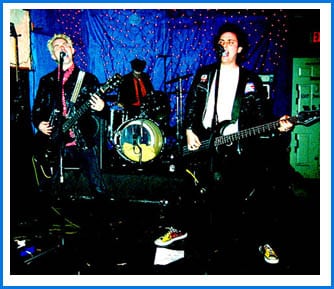 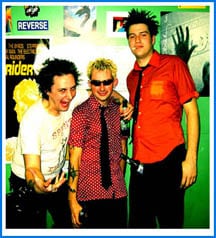 MG: Explain your sound in one sentence.
Jami: I think Mike is the best at that.
Mike: I would say that the Sleazies are an old school style punk rock band a la 1977-1981 style with a pinch of AC/DC topped off with Motorhead and a whole hell of a lot of snotty pogoing rock n' roll.
Jami: Sounds good to me!
MG: What do you think of the current state of punk, or more appropriately, things that get called punk, such as the whole emo trend and Dashboard Confessional types?
Josh: Ouch!
Jami: Well, I think that's a marketing term at this point. There's really, really good stuff and there's a whole bunch of crap. If the crap wants the term punk so bad, we can be bounce music or something. I don't care. We're a rock'n'roll band.
Mike: They call a lot of things punk that truly isn't. But, you know, sometimes punk itself is a meaningless term depending on how you define it.
[At this time, the bass line to Rush's "Tom Sawyer" can be heard drifting in from the PA to the backstage area.]
Mike: Rush is more punk than some of the bands today.
Jami: Yeah! (laughs).
MG: Are there any bands today that you guys stand behind and really like?
Jami: Oh, fuck yeah.
Mike: The Briefs!
Josh: The Briefs are definitely great.
Jami: Mike and I were both listening to the Prostitutes all the time when we first started this (the Sleazies). That was what inspired us to be in bands again.
Mike: That's right. The Prostitutes were a big influence.
Jami: The Stitches, Kill-A-Watts, Henry Fiat's Open Sore…
Mike: The Clap is a great band from New York.
Jami: And the Skulls have a new record out, although I suppose that they aren't exactly new.
Mike: Endangered Feces from Queens are fun. There's a lot of great bands and there's more that I haven't heard.
Jami: Oh, and the Cripples. There's lots of bands with synthesizers in them out in the Pacific Northwest that are really good.
Mike: The Spitzz from Boston are a band I dig.
Jami: And the Spits from Seattle! There's a lot of good stuff everywhere. It's just usually one or two bands per town.
MG: How do you feel about the scene in Providence?
Jami: I like the scene in Providence, actually.
Josh: I like the scene even though I feel that it's gone down since the good old Gringo days when you could get a band playing and fill up The Met Cafe. Now it's a little spotty. I don't know. It's still good. It's small, it's tight, you get to know a lot of people and it's easy to advertise.
Jami: I think that we have more good bands per capita than a lot of places I can think of. 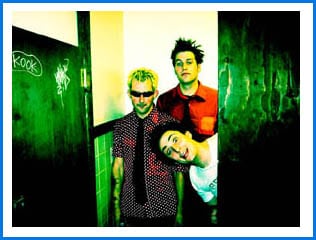 Thanks to The Sleazies for being such nice guys and making time for me. Go to http://www.sleazies.com/ for pictures, sounds, and updates.