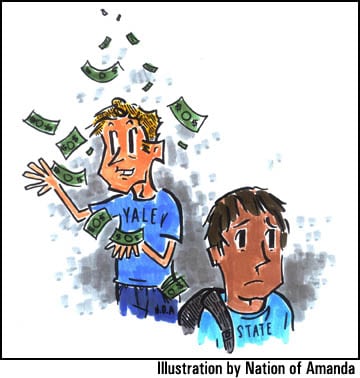 Class Notes : Welfare for the Rich at America’s Colleges

A look at the American education system reveals the privileges of wealth at their gaudiest. A 2007 study by UCLA’s Higher Education Research Institute found that parents of college students possess incomes 60% higher than the national average.[i] More damning was a 2004 report by the Century Foundation, which showed that 74% of students at the top 146 U.S. colleges belonged to the richest quarter of the population. Only 10% came from families in the lower half of the income scale.[ii] While leading universities draw their students from the ranks of the wealthy, they obtain much of their money courtesy of the taxpayer. Even private institutions benefit immensely from tax exemptions, with the largest boon going to schools that cater to the rich. Such upper-class welfare is never justified, least of all in a time of economic crisis and rising inequality.

College officials are quick to claim that they support diversity and equal opportunity, especially when their practices are under scrutiny. In a friend-of-the-court brief filed during a 2003 affirmative-action case, lawyers for eight highly rated colleges[iii] (including six Ivy League institutions) stated that “admissions officials give special attention to, among others, applicants from economically and/or culturally disadvantaged backgrounds.”[iv] If that’s true, then the above statistics demonstrate that there is a vast difference between “giving special attention to” low-income applicants and actually admitting them.

Further signs of social elitism on campus appear in The Shape of the River, an influential 1998 book that included statistics provided by 28 institutions of higher learning. The book’s principal authors were William G. Bowen, former president of Princeton, and Derek Bok, former president of Harvard. Bowen, Bok, and their co-authors presented an effective defense of race-based affirmative action in undergraduate admissions (college officials consistently state that they do not practice gender-based affirmative action at the undergraduate level), but they also revealed just how few working-class people attend leading universities. They divided college-age Americans into three broad categories according to socioeconomic status: high, middle, and low. Nationwide, 50% of African Americans and 22% of whites fit into the “low status” category.[v] (The authors did not include other racial/ethnic groups.) However, at the eight most selective institutions in the study,[vi] only 12% of black students and 1% of white students came from the low-status group.[vii] Current admissions policies are failing working-class minorities, as well as white applicants from that class.

Universities urgently need to make two changes. First, end preferences for children of alumni or “legacies.” Second, include social class within existing affirmative-action criteria. Neither of those ideas garners much support from educational administrators, despite the fact that “diversity” is one of the most common buzzwords on today’s campuses. For their part, Bowen, Bok, et al opposed making economic status a category for affirmative action, disregarding the grim evidence of social exclusion presented in their own book. In fact, the authors refused to acknowledge that it is possible to craft an approach that takes account of both class and race. They acted as if they had to choose between the two. I thought only right-wing demagogues tried to set racial minorities and working-class whites against each other.

When offering their reasons for opposing class-based affirmative action, the authors of The Shape of the River put the matter bluntly: “students with low socioeconomic backgrounds are less likely than students of equivalent ability from high socioeconomic backgrounds to complete their studies, attain professional or doctoral degrees, and earn high incomes.”[viii] That sentence provides a disturbing insight into the beliefs of administrators at the most prestigious schools. Here we see the former presidents of two Ivy League institutions encouraging colleges to engage in social profiling, to reject low-income applicants even when their academic records are as strong as those of rich students.

Though it may surprise Bowen, Bok & Co., there are good reasons why working-class students are less likely to obtain degrees or high salaries. Many have to drop out of school and find work to help support their families; graduate and professional schools are usually expensive; family connections offer the rich a competitive edge on the job market. Given the obstacles they face, applicants from less privileged backgrounds should be rewarded if they perform as well as their wealthier peers. But not according to the experts who wrote The Shape of the River. For his part, Bowen has since argued that admissions officers should place “a thumb on the scale” in favor of low-income applicants, a concession that hardly atones for his endorsement of class bigotry in his most famous book.

Imagine the reaction if the targets of Bowen and Bok’s prejudices had been, say, women instead of working-class people of both sexes. That won’t take much imagining. In 2005, Harvard’s president, Lawrence Summers, created a national controversy when he suggested that innate differences between the sexes might explain why boys scored higher than girls on certain math and science tests. Summers’s remarks, while foolish, were nowhere near as offensive as those of his predecessor Derek Bok. While Summers speculated about the causes of a gap in test scores, Bok indicated that working-class students were undeserving even when their scores matched those of upper-class applicants. Yet, when the backlash against his remarks prompted Summers to resign, Harvard selected none other than Derek Bok as his interim replacement. Though no one in the media seemed to notice, the episode summed up the hypocrisy at elite schools on the subject of diversity.

Taxpayers heavily subsidize educational inequality: institutions of higher learning do not pay taxes on their donations, investment income, or endowments. The biggest beneficiaries of those exemptions are rich colleges with rich students. Prestigious institutions use their tax loopholes to help them accumulate enormous wealth. From 1990 to 2007, the nation’s most prosperous university, Harvard, saw its endowment grow from $4.4 billion to $34.9 billion.[ix] Along with Harvard, Princeton and Yale rank among the top colleges in assets, but near the bottom in social diversity. The Century Foundation report showed that only about 8% of students at those three schools received Pell Grants, federal scholarships for students from middle- to low-income families.[x] (A household income of $50,000 was the upper limit for Pell recipients that year.)[xi] From 2006 to ’07, however, Harvard, Princeton, and Yale’s tax-free endowments grew by almost $13 billion combined, an amount roughly equal to that year’s budget for the Pell Grant program.[xii] During the recent stock-market crash, the endowments of even the wealthiest universities declined in value. Even so, when the market improves, posh schools will again use tax breaks to expand their financial empires while talented but needy students struggle to pay for college.

In education, as in other areas, the government has its priorities backward. Tax exemptions should be granted only to schools that meet reasonable goals for greater enrollment of working-class students, while maintaining a similar commitment to racial diversity. For the most exclusive colleges, that would require a dramatic increase in working-class enrollment. Institutions that do not comply should pay the same taxes as for-profit corporations. It is time the American people stopped underwriting country-club admissions practices at the nation’s colleges.