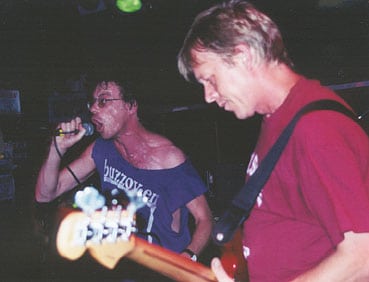 Citizen Fish: Plugged into our Minds By Sean Carswell

I interviewed Citizen Fish for Thrasher Magazine. They told me all kinds of funny and interesting stuff that I thought was perfect for Thrasher's audience. The interview showed a less-serious side of Citizen Fish. It ran in the February 2002 issue.

But there were also questions that I wanted ask them solely for the sake of my own personal curiosity. I sometimes wonder if I put too much thought into punk rock lyrics, and Citizen Fish lyrics do send me off on some wild mental tangents. I also remember an interview with the lead singer, Dick, back when he was in the Subhumans, where he said that the Subhumans weren't a punk band. They were a thinking band. So, after the Thrasher interview, I left the tape recorder on and tried to find out what this "thinking band" spent their time thinking about.

all photos by Sean Carswell 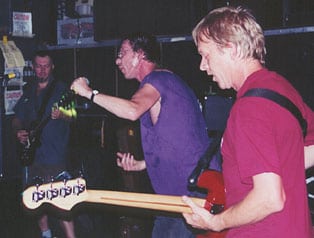 Dick: Well, we've never eaten any meat. Mostly Karoline and Richard [the Citizen Fish roadies] have been on tour with us and Karoline has this bible of health food stores across the America.

Jasper: And they force us to go there.

Dick: The last two tours we did, we've gone to health food stores every day. And there's no real hot food available at most of them, but we do eat really well. And we've knocked Denny's on the head. No more of that. We used to go to Denny's way too much. It's way too much money to feel completely bloated, have bad shits, all that stuff. And now we're eating very well. We've totally cut down on the amount of junk food we used to eat. Have you tried eating that stuff out of gas stations? After a week of, "oh look at these weird things they've got in America," after trying them, it's like, "not that again." It was horrible last time. You have to progress. There's fucking great health food stores over here. They're packed out with all sorts of wacky stuff. To find a store that contains all that stuff in Britain, under one roof, let alone find a chain network of them, with a café in it, is a rarity. And over here, it's not. Which is a good thing.

Sean: Dick, tell me about the pilgrimage you took to Stonehenge.

Dick: We had about forty-five people on about thirty bikes and rickshaws pulled by bikes, one of which contained a whole sound system. It was led by guys with mobile phones at the front and back so the traffic could always pass us in one way or the other direction so we'd never be blocking traffic. So I came from Bath to Stonehenge, about forty odd miles away, over three very hot days - which is a rarity in England, no matter what month it is. To go to the annual summer solstice, which is the twenty-first of June, at Stonehenge where there used to be a thirty thousand people festival from nineteen seventy something to 1985. It got smashed up by the police in '86 at the notorious "Battle of the Beanfield." Since which, there's been not much going on as Stonehenge.

Last year, 2000, they opened up for twenty-four hours and said, "Okay, you can all come in." It was very controlled. They turned a couple of fields into a massive car park. You could walk a mile to get to the stones, where there were big, green floodlights. It was the same this year, as well, except there were more people.

But going on bikes was just great. You suddenly learn how to cycle properly. Instead of going as fast as possible the whole way and completely knackering up your legs, the only bit that gets sore is your ass, if you're thin like me, because when you're going uphill… We were following a horse. You've got to remember this. Well, you don't have to remember because I hadn't told you yet. But we were following a horse which was going one horsepower. The speed of horse. So uphill, it's slow anyway. It's like a slow bike race. You're lucky to keep peddling at all. You're walking up half of the hill. Going downhill, you're going the speed of the horse, so you're breaking all the way downhill and struggling all the way up. But it was a very slow process. We camped out at night. The first night on a farmer's space. He drove up on his tractor and looked and went back and talked to his wife and came back and said, "Yeah, fine."

Jasper: Well, the Bath scene has got these people who make these rickshaws, people carriers, as a commercial venture. And they're selling them to various places in Europe. Their real, like, "One less car." And Dick's girlfriend Emma is involved in the Critical Mass.

Dick: We do it in Bath once every month. Every last Friday of the month. Do you know what Critical Mass is?

Sean: Isn't it when you block up the roads with your bikes?

Dick: The one we do, we don't block it up so much as just go through a cycle around Bath with as many people as possible, just to say, "We're on bikes. We're not stuck in traffic. We're having fun."

Jasper: And they take a peddle-powered sound system as well. And DJs play records on the rickshaws as they're moving along.

Dick: We've even got a radio frequency set up so if you carry a small radio and tune it to the right frequency, you've got the same music going down the whole stream of bikes. Which is great. It's just music and cycling along. 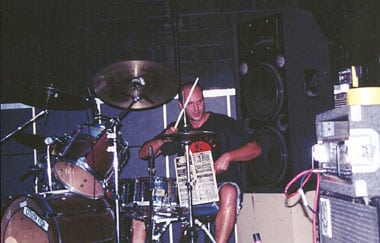 Sean: I want to ask you guys kind of a sociological question. I don't know if you've thought about this. But on your new album (Life Size), you have a song which basically says, "Turn off the TV." TV's controlling people's lives ("Picture This") and the very next song seems to be about people's inability to communicate with each other properly ("Internal Release"). If you put the two songs in a row, it's almost like a cause and effect situation.

Dick: At worst, it's like that. At worst, a lot of general conversations between people, just starting conversations, it used to be all about the weather. Now it's all about soap operas and what was on the telly last night and "Did you see this and did you see that?" You know how many conversations I haven't had because I didn't watch a certain program. "Internal Release" is more specifically about human emotions not coming up much in conversation generally unless you set up a situation where it is to be talked about, like, "Can I talk to you later about something I've been feeling lately." It needs to be set up to have a decent emotional conversation with someone who isn't a best friend or whatever.

But songs don't go that deep. Songs need to be put in a nutshell. In a nutshell, "Internal Release" is just like a picture: "How's it going?" "How's it going?" "Yeah, great." "Yeah, great." I'm sure all these people saying "yeah great," I'm sure it's not going that great for them. If they actually let out what was pent up inside, it might be a different answer a lot of times. But the mass media, television specifically, does induce very short attention spans in people. So it's gotten to the point where conversations actually are geared to be shorter. Otherwise, you just can't hold people's attention long enough to have a decent conversation. And we all suffer from it. I do. I feel sometimes like my memory is so shot, and it has to do with all these massive adverts everywhere and the nature of filming and the nature of presentation of "short is good and long is boring." Keep the audience to supply the advertisers with the space in people's minds.

Phil: The length of time bands play sets over here is all of that. When we - going back to the Cringer tour (Citizen Fish toured with Cringer in 1991) - we played at Gilman…

Jasper: No, we played at Al's Bar in LA with the Offspring, Cringer, and Neurosis.

Phil: Yeah, and I think we did, like an hour and a half or something, which is what we were used to doing in Europe. People wanted you to party all night and play all night. And then Cringer said, "Hey guys, it's kind of a long set you're doing there." And then we just realized the attention span and what people wanted. People didn't want to see you for more than about fifty minutes, really.

But that's just coincidence that those two songs ended up together on the record.

Dick: No. It was all planned out [laughs]. It's a concept album really.

Sean: But the two of them together do make you more aware of it.

Dick: I'm glad someone's looking that closely to it. "Picture This," that particular song as opposed to "Choice of Viewing," which is more about how completely shite TV is. "Picture This" is about how television could've been a very useful instrument for not just entertainment but education. Gaining knowledge rather than just promoting stuff on the behalf of advertisers. I think the thought of television is the advertising. And what that has done to the content of TV has made television as bad as it is now. A box that receives pictures is not an evil thing by itself, but when that much money gets involved with it, via advertising, then all the principles of good entertainment or good information or true information or deeper studies of situations or art, go out the window. It all becomes very lowest common denominator. Get it to as many people as possible so they buy as many products a possible, etc.

Phil: It's insane over here, as well. It's really full-on, compared to European TV, with the advertising and stuff.

Jasper: My mother and father, when the adverts come on, they just hit the mute button. Just for that great breather.

Phil: Or, in England, you go make a cup of tea. For the most popular soaps, the have a huge surge on the national grid when the break happens. It totally overloads the whole power system because everyone goes and makes a cup of tea then. 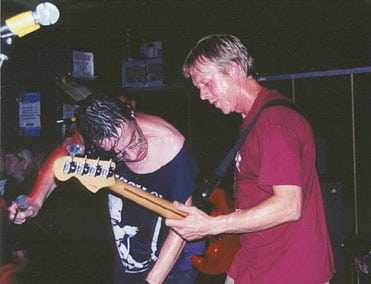 Free Souls in a Trapped Environment, Wider than a Postcard, and Flinch on Bluurg Records.