It was a punk rock palace, and the reigning kings of old, Circle Jerks, were holding court. Long ago, nobody ever thought punk rock would be allowed in a respectable venue, much less someplace absolutely palatial like the historic Fox Theatre in the Arts Colony of Pomona. Looking around at the motley assemblage of punk and thrash metal fans milling about the stately venue with its ornate columns, and wide, curved, and carpeted staircases, I felt like a burglar in some rich person’s castle. Punk rock parents with their punk rock children made up a noticeable portion of the large crowd, and I thought to myself, “Man, things have really changed.” Punk rock may have broken into the mainstream, and it is regularly allowed in places where grandma and grandpa used to jitterbug to swing bands, but one thing has remained the same… sometimes you gotta go “WILD IN THE STREETS!”

It was a good thing the large crowd outside did not decide to go wild in the streets. It took forever to get into the place. Those who still needed to get a ticket had to wait in a long, long, line that stretched around the block in order to get one, and then go to the other side of the venue to wait in another long, long, line in order to get meticulously searched before going inside. As a result, I missed the opening Ceremony. The first band was named Ceremony. Get it?

I was stoked to see the thrash-metal band Municipal Waste again. I first got a taste of Waste a couple of years back when it opened for GWAR. These four guys from Richmond, Virginia bust out some no-nonsense super-high speed punk/metal with a definite sense of humor. I was casually talking to guitarist Ryan Waste backstage completely unaware that he was going to take the stage in only a moment. I was cracking jokes about how he should get a wind-up crank on his guitar so he could play it like a child’s Jack-in-the-box toy. “Yeah! That’s a great idea! It would make things a lot easier!” He replied, and then quickly turned and walked out onto the stage to an impressive roar of devoted fans. “Damn! What’s that like?” I wondered to myself. Municipal Waste fans are totally fucking nuts. I saw a few of them head-banging so hard they hit their faces and were happily bleeding. Others were bleeding from other people’s feet, heads, or from some other body part smashing into their heads and faces. What else would you expect from a band that plays shredding songs like “The Thrashing of the Christ,” “Sadistic Magician,” and “Headbanger Face Rip”? Double bass rules. Vocalist Tony Foresta even got the crowd to do the “Wall of Death,” where a bunch of people surge all at once across the floor into everyone on the other side of the room. Red Rover has returned. Get Wasted at: http://www.myspace.com/municipalwaste 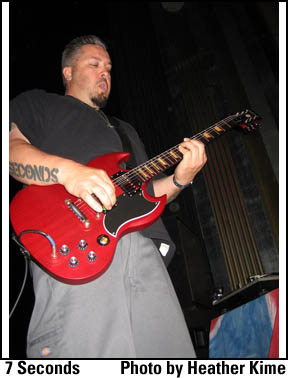 After that, 7 Seconds took the stage and made me feel like a kid again. From the first song, “Not Just Boy’s Fun,” to the last song of the encore, the ever-popular, speeded-up cover of “99 Red Balloons,” I thought of the countless hours spent skating to the music of the four (not straight edge) guys from Skeeno, (Reno) Nevada. It’s been a long time since they first started out way back in 1980, but the Marvelli brothers (Kevin Seconds and Steve Youth) have remained loyal to their hardcore roots to this day. Thirty years goes fast, and I was impressed to see so many people—at least a couple thousand—jumping up and down all over the place while singing so many of the lyrics that were a big part of my skatepunk youth. Kevin, like the rest of us from that era, is noticeably thicker and his hair has thinned quite a bit, but his distinctive voice is as recognizable as ever. It was very appropriate for the band to launch into the song, “Young until I Die” just as I was thinking that. When the huge audience sang along with each “Woooah-wooah,” the sound resonated through the whole building. It was truly moving. 7 Seconds is known for its positive messages as well as its speedy delivery so, of course, when a fight broke out, the band stopped playing, Kevin admonished the perpetrators, and the show resumed. There was one completely unexpected and hilarious moment when a very drunk young fan got past the stage barricade and security, ran onstage, pulled down his pants, and raised both arms in a triumphant salute while baring all to the crowd. Amazingly, he got away by diving back into the laughing melee. The scheduled set ended with “Walk Together, Rock Together” and the encore consisted of “Committed for Life,” “In Your Face,” and “Here’s Your Warning.” 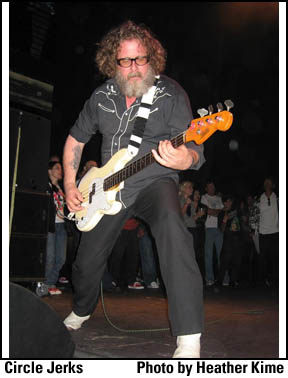 Soon, it was time for the archetypal Circle Jerks. No, the band hasn’t made any new music in decades, but so what? Every song is a genuine punk rock classic. Keith (voice), Zander (bass), Greg (guitar), and Kevin (drums), played an extra-long set wherein every number was greeted with maximum enthusiasm. We got to hear twenty seven songs in total. Standing in the shadows of stage right, I looked out at the undulating sea of Jerks fans. Again, I noticed the kids singing along with their aging parents to old favorites like the first tune, “Question Authority,” “Letter Bomb,” “All Wound Up,” “Deny Everything,” “World up My Ass,” “Wild in the Streets,” and a bunch more. We even got to hear a slightly tweaked, but mostly true to the original cover of Creedence Clearwater Revival’s “Fortunate Son.” You know that one, “It ain’t me / It ain’t me / I ain’t no millionaire’s son…” Zander was looking rather thick, and he really didn’t move too much other than to bob up and down to his own steady bass lines. Even so, the music in his mind deftly left his fingers, through his instrument, and directly into the minds of a couple thousand appreciative punk zealots. Keith didn’t move too much either. He pretty much stood in one place, occasionally moving back and forth between front/center stage and straight back to the drum kit. This did not diminish the power of his performance either. Even when standing still, Keith Morris’s intensity is astounding. For the record, guitarist Greg Hetson was as frenetic and jumpy as ever, and drummer Kevin Fitzgerald was also happily kinetic. It was so wonderful that it didn’t quite seem real. All those people in such a snazzy place all singing together so loud it reverberated back up onto the stage and sounded like a genuine punk rock chorale. The show would have been long enough with so many songs, but you know how Keith likes to talk. He rambled at length about anything and everything from stagedivers should get off the stage within three seconds to something about his throat closing up from eating too much cheese. Eventually, the band would get back to work after patiently waiting for each stream-of-consciousness lecture to end. The penultimate Circle Jerks song was “World up My Ass” and the band finished the planned set with a real mean cover of Black Flag’s “Wasted.” The well-deserved encore gave us one more Jerks tune, “Red Tape” and three more Black Flag angry favorites, “Revenge” “Gimme, Gimme, Gimme,” and “Depression.” It was anything but a depressing night. Thanks to all who made it happen.