On the evening of Monday, October 20th, I went to see Chuck Ragan and the Revival Tour at Nutty’s North. It felt good to be at a show. It was the first that my husband, Tony, and I had been to since moving from Gainesville, Florida to Sioux Falls, South Dakota, my hometown. It felt like really coming home to see the familiar faces, especially longtime cornerstone of the Sioux Falls scene, promoter Jayson Weihs (without whom we would have to drive hours to see anything good). A good crowd of at least 150 filled the dark subterranean space.

I knew only abstractly what I was getting into when I went. I was familiar with Eric Swanson (a local- turned Minneapolis- turned local again musician) who would be opening the show, and knew what to expect when it was just Chuck, but the buzz about this tour was that it would be different.

Chuck had Tim Barry of Avail, Ben Nichols from Lucero, and Austin Lucas with him. The four of them were the front men with the guitars and the microphones, but there were others that played a supporting, though essential, role to the performance. Jon Gaunt, a familiar face from Gainesville, played fiddle. Todd Beene and Digger Barnes rounded out the line-up, playing steel guitar and stand-up bass.

The show started with Eric Swanson and his somehow-intact Taylor guitar. Historically, I have been wary of singer-songwriters and acoustic musicians, as they have more often than not struck me as a bunch of poseurs trying to seem deep. Eric changed that for me years ago, allowing exceptions to my ludicrous rule. His sets can be accurately depicted as “assaults.” His voice is all cigarettes and whiskey. He plays his guitar ferociously, often breaking strings and losing picks. Although he did not break any strings on this night, the set was no disappointment. Not by any stretch. The crowd watched enthusiastically, very few looking around as if to say, “When is Chuck Ragan going to play?” The front rows all sang along, hollering and heckling between songs.

When Eric was done, the Revival Tour began immediately. Every member of the tour was onstage, instrument in hand, and off they went. They launched into a series of songs that reminded me of the movie O Brother, Where Art Thou? It was up-tempo old-timey music: engaging, familiar, and warm. It is the kind of music that I did not grow up around in the Midwest, but it strangely awakens a part of my soul when I hear it—a part that I never knew was sleeping. 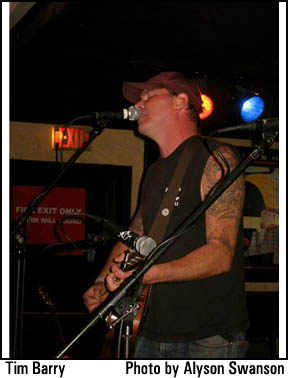 After the introductory set, each of the front men took their turns. Each one ran seamlessly into the next, with no need for breaking down or setting up. They were all parts of the whole, jumping in and out of each other’s sets to supply an extra voice, guitar, or mandolin.

First up was Austin Lucas. I had never heard of him before, so I had no idea about the pleasure that I was in for. This man sings like an angel. No joke. Not in an annoying choir-boy-turned-emo-kid way, either. It is from his feet. His voice is utterly transfixing. It is full of sorrow and joy and every other emotion necessary to propel one through each song. A person would have to hate music and feelings and all things good and wonderful to not enjoy this set.

Tim Barry played next. Even though I have seen Avail a dozen times and him play solo once or twice over the span of a decade, I always seem to revert to my fifteen-year-old self. It is like I am watching Avail for the first time at the Pomp Room and my insides are all pterodactyls and condors.

Tim’s gift for delivering simple, sharp, meaningful lyrics is apparent whether he is clutching a microphone, drenched in sweat in front of an endless mosh pit, or clutching a weathered acoustic guitar in front of a crowd quiet enough to hear requests from the back. He cuts to the core. No pleating, no lace. It is like realizing that you are hearing the truth for the first time after a lifetime of lies. It is so utterly refreshing.

Ben Nichols was up next. To me, his set was like a stripped-down Lucero set. That is only because when I hear Lucero, all I really hear is Ben’s heartbreaking, country-crooner-in-a-punk-package voice, anyway. Ben’s songs are the sort that can easily cross all genres and comfort zones, because they are the real deal. A guitar is the entire accompaniment that a singer like this needs. There is no need to be a country fan to enjoy these songs. They are about the things that all good music was about before it was put into boxes and told to behave. Love, loss, heartache, and lots and lots of drinking were reflected against our collective consciousness. It was fun to look around the audience, watching kids who would normally not be caught dead listening to country, tapping their feet and nodding their heads, hypnotized. 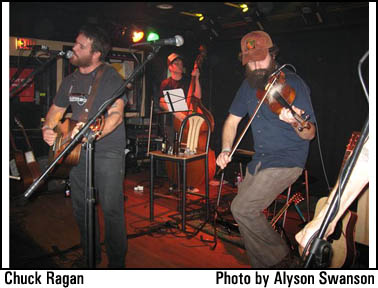 Chuck Ragan was up last, and the crowd was his. He owned it. Everyone sopped up each utterance of his gravel and velvet voice like they were starved for it. He played from his solo albums, and threw a couple of old Rumbleseat favorites in, as if everyone was not losing their minds enough. During a few songs, the audience appeared to be singing louder than the man with the microphone. Like always, Chuck was the fire that everyone warmed their hands to. He radiates through his music, creating an undeniable gravity with his country-punk-folk incarnations.

The show ended in a fashion similar to which it started. Eric took the stage again, quite a bit looser than he had been hours before. He played two or three more songs to a louder, more relaxed audience. It seemed very natural. Eric was a thread woven into the fabric of the overall show, instead of a quickly forgotten local opener.

When Eric finished, the whole crew took the stage again. They played a couple of songs as a group, and finished with “Distant Land to Roam,” a song originally recorded by Chuck and Austin. It was almost silly in its appropriateness as the last song of the evening, with its alternating choruses of “fare thee well.”

I think that these guys are really on to something. The easy transitions between sub-sets to form one whole show created an irresistible, constant energy which never wavered. The whole audience remained engaged throughout. It may not be a major innovation in the grand scheme of the world, but in the punk universe it is a new one to me. Even when bands share equipment, there is a small break in the action.

Tony and I left Nutty’s feeling revitalized. It was as though our faith had been restored in music and everything else that we believe in. It is ironic that they named their tour Revival, because it was like church for us. There is nothing that can compare to music when it comes to the enlivenment of our spirits. If there was a church of punk rock, the Revival Tour would be the house band every Sunday.