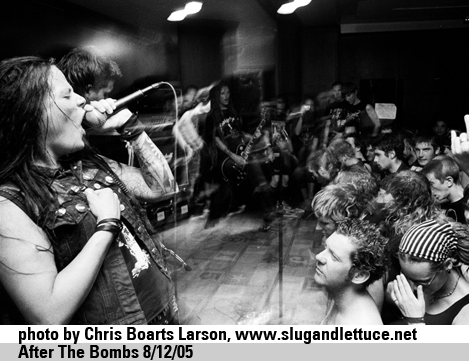 In 2001, after I had been living in Richmond for a few years, I trekked up to Philly for an awesome show with a combination of From Ashes Rise, Tragedy, and Strike Anywhere (to name a few). The best part about this particular show, besides all the awesome bands, was seeing friends from cities on the East Coast all come together. Somehow I’d forgotten that NYC was only two hours away and that a whole bunch of my friends would come down for a great show. Providence, Boston, even other friends from Richmond… they were all there. The bands were awesome. The gathering was the best.

This show was sort of the “unofficial” beginning of what would soon become known as “Pointless Fest” or, to some, “Philly Fest.” Over the next few years, this annual fest that started out as a way for Tony and Greg to bring some of their favorite bands together to play on their shared birthday weekend, ended up being the best annual four-day fest of the year. This also marked the era of regular fest-going for me and many of my peers. Once or twice a year we could count on a “family gathering” with great bands, friends, and times.

In 2005 the fest was at its apex. After The Bombs from Montreal were a newer band with some scene vets that I’d known for awhile. My friend Todd said to me, “You are going to like this,” as I watched Janick get on stage. The metallic dirge and distorted, echoing growl of her vocals was a throwback to Sacrilege, a band I loved yet had never seen. Yes, Todd was right—I loved After The Bombs and was absolutely smitten with Janick!