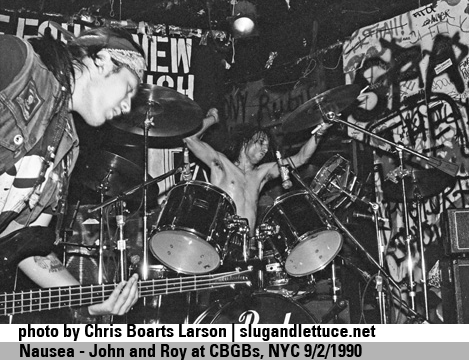 Nausea were such an important band. They were important to NYC. They were important to anarcho punks the world over, and they were important to me personally. I was lucky to live in NYC while they were an active band. I got to know them and saw them often, which was a life changer for many reasons, to be sure. I have tons of photos of Nausea and many of my favorites are of Amy and Al. They were lively and energetic and fronted the band well. But Roy is one of the best drummers I've ever seen and he was (and still is) so much fun to photograph. I like this photo because it's a great moment between John and Roy and it also captures some of the feeling of CBGBs. This show at CBGBs was part of an awesome weekend of shows—the first time I got to see Oi Polloi. Between ABC NO RIO and CBGBs—Jesus Chrust, Destroy, Insurgence, Born Against, Nausea, and Oi Polloi played a combination of some of the most memorable shows in my life.