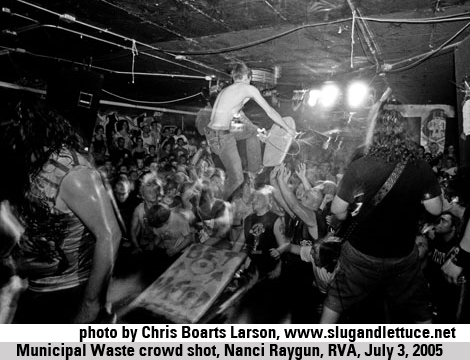 Before Municipal Waste were a well-known (inter)national touring band, they brought their lively, party-hard energy and insane antics to local clubs with stage props, wizards, boogie boards, and objects (including people) flying through the crowd. At this particularly memorable local Richmond show they had their usual ramp set up for stage dives and this fella had a boogie board to surf into the crowd. For me, this picture sums up the craziness that these early shows had at our local venue known as Nanci Raygun in the mid-2000s. (For non-Richmonders, it’s the same club that was for many years known as Twisters and is now called Strange Matter.)