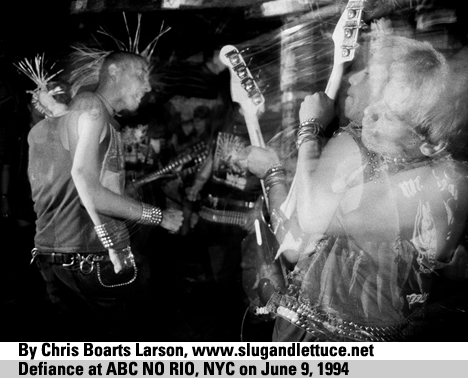 It’s a Saturday in July in New York City. I’m at ABC NO RIO, where I am every Saturday. There is a huge show with tons of bands from across the country. Locals 86’d open. Inhumane from Seattle, Assrash from Minneapolis, and Multiple Choice from California all play. Failure Face from Florida were supposed to play, but their bass player—so excited to be in NYC—wandered over the bridge, got himself stabbed, and ended up in the hospital. It was the only time anyone ever came to me asking to use the phone to start calling hospitals because a band member had gone missing. That is a story best told by Bob Suren (in his next book). I’ll admit that seeing Defiance from Portland was the highlight of the show for me. They were a great band and it was the right time and place to see them for the first time. Ironically, they just played a reunion show in NYC for the first time in twenty years!

The next day I got on a train home to visit my parents in Pennsylvania. I remember the utterly ironic juxtaposition between being in the middle of the drunken chaos melee of that show on the LES one day and the serene, rolling hills of Pa. the next, making the awesome extremes of both all the more perfect.

This random show brought together so many awesome people, many of whom I still have long-lasting, important friendships with twenty years later. Thank you to Kelly Halliburton, Bob Suren, and Robert Collins for having amazing memories of details of shows from twenty years ago—and for still doing what you do after all this time!