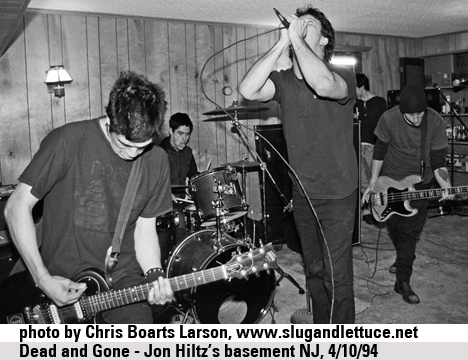 Every so often we would trek out of NYC to shows in New Jersey or other surrounding areas for shows. Jon Hiltz had some rad shows in his basement and there was one week in 1994 when we were there more than once. The first night we went out to see Citizen Fish and Spitboy. Having just seen both bands a couple nights before, I was super excited to see them again.

Once at Jon’s, I saw this group of guys who I didn’t recognize with a totally different style. They stood out with that Bay Area look of the early ‘90s. Turned out it was Dead And Gone, a band that I was super into and that were going to be playing the following week in NYC—but I had no expectation to see them that night. I guess they had a day off and came to stay at Jon’s, so they played. It was awesome! I got to see them at Hiltz’s two days later with England’s One By One, and then a few days later at ABC NO RIO. That was a great week!

This is one of those good memories that sticks with me: you walk into a place expecting one thing and walk away with much more than you expected. Dead And Gone were obscure at the time, relatively unknown. I don’t think very many people were at their shows. In fact, I remember sitting on the steps of ABC that Friday thinking how sad it was that no one was gonna to see such an awesome band. I felt like I had a secret—already having seen them twice that week—but it was a secret I wanted to share loudly. For me, those shows that week were some of the best ever!