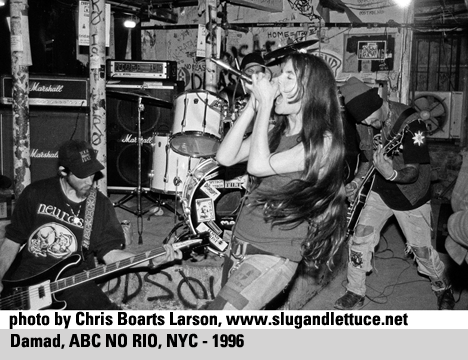 From the south lands of Savannah, GA, Damad steamrolled through the ‘90s—linking members from Antischism and Kylesa—and bridged the world of punk and metal. They created some of the heaviest, crushing brutality with some of the most gnarly awesome female vocals ever. They put Savannah on the map in the world of DIY punk and Southern heavy music.

In 1996 when Damad came to NYC and played ABC NO RIO, it was a game changer for me. I fell in love with Victoria and Damad, and solidified life-long friendships. This is one of those shows I reflect on because it was so under attended; if Damad was still around today, their shows would be packed. Yet it is through the legacy of Damad that we have bands like Black Tusk, Baroness, and Kylesa. Damad pioneered the heavy Savannah sound and still rank among my all time favorite bands. Give their album Rise and Fall a listen.