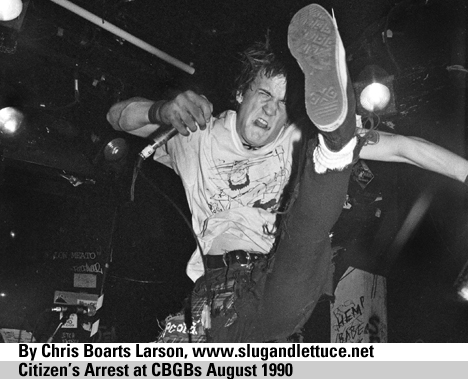 May 21, 2016
(click for full size)
In 1990 I got involved with the DIY hardcore punk scene in NYC, which, for me, was largely centered around ABC NO RIO. Bands like Born Against, Rorschach, Go!, Burn, SFA, Yuppicide, and Citizen’s Arrest were just a few of the regular bands that played weekly. While ABC NO RIO’s hardcore matinee started, in part, as a DIY alternative to the CBGBs matinee, there were still regular and great shows at CBGBs, including this one in late August of 1990. I took some of my favorite—and what have become iconic—pics of Citizen’s Arrest at this CBGBs show when they played with SFA and Negazione.

Over the years, the only time I ever had my camera gear damaged was in the frenzy of a Citizen’s Arrest show. It was worth it. What I remember most about this show were the air jumps. Daryl from Citizen’s Arrest was a wild man, known for his almost non-stop flight during their frenetic, blasting grind hardcore set. While there is one shot in particular from this show that has been shared widely over the years, I think this lesser-seen pic is equally as epic.