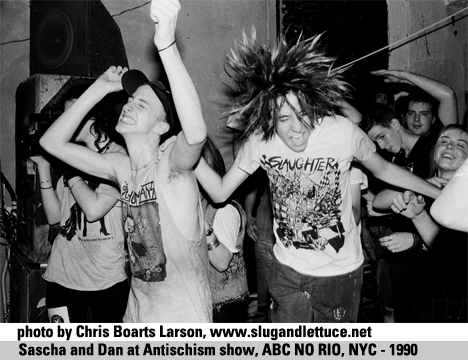 This photo of Sacha and Dan was taking when Antischism played at ABC for the first time in June of 1990. Antischism from South Carolina was one of those bands that brought together the punk and hardcore kids in a perfect unity as they all danced around being goofy and having so much fun. The smiles show it all. This picture embraced the spirit of the place at the time, and was used on flyers for ABC and became associated with ABC NO RIO for a time. It continues to be one of my favorite photos.

I first found out about the "The Saturday Matinee" at ABC NO RIO through Bullshit Monthly. I went to my first show in late 1989 and never stopped. Originally conceived as sort of an alternative to the CBGBs hardcore matinee, the philosophy at ABC NO RIO was DIY, volunteer run, all-ages, non-profit, anti-racist, anti-sexist, anti-machismo, all-inclusive and entirely embracing the do it yourself ethic. For all the years that I lived in New York City, I was involved in ABC NO RIO, attending and booking shows, documenting them, and generally doing whatever it took. ABC NO RIO was like a second home to me. It is also worth noting that while ABC NO RIO is synonymous with hardcore punk as a venue, it is alsoa the name of the long-running arts collective, as well as the building that still stands today.

As part of Lower East Side History month and in celebration of twenty-five years of the hardcore punk matinee at ABC NO RIO, there is a Visual Retrospective exhibit being organized that will be on display from May 7th through June 4th. Check out this link for more information.