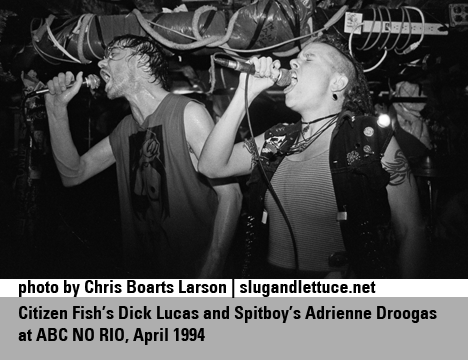 Citizen Fish and Spitboy toured the eastern U.S. in April of 1994. On April 10, 1994 Citizen Fish played at ABC NO RIO, like they had every year since 1990. For some reason, Spitboy didn't play that show, but Adrienne did join Dick in singing “Small Scale War.” They played a show together the next night in New Jersey and it was a memorable weekend all around. –Chris Boarts Larson, http://slugandlettuce.net/

And don't forget to DONATE to help Razorcake expanding its coverage, like the newly launched “Saturday’s Photo Column.”