Both photos taken by Chris Grivet
at Insubordination Fest on 8/13/2011
at the Ottobar in Baltimore, MD

It was hard to ignore the ominous gray skies as I boarded a cruise ship at the Skyport Marina in downtown New York City. It had been raining all day and it appeared the weather would only get worse. While this may not be the most ideal weather for a typical cruise around the New YorkHarbor, this was way different—this was a punk rock show on a cruise ship traveling along the river, passing some beautiful New York City scenery on the way. Seeing the Statue of Liberty in the background while watching a band play is something I thought I would have to wait until I was involved in the punk scene on the Planet of the Apes to ever experience. Good thing I went on this cruise!
Pop punk luminaries Kepi Ghoulie and Chixdiggit! were hitting the waters for the Rocks Off Concert Cruise and I felt compelled to experience a cool show on a boat, something that isn’t exactly happening on a weekly basis. “This might be the closest I’ll ever come to really living the song ‘The Downeaster Alexa’ by Billy Joel,” I thought to myself, so off I went!

Kepi Ghoulie began the festivities with an energetic set, playing newer solo material and old Groovie Ghoulies favorites like “The Highwayman” and “Chupacabra.” Kepi is a great showman, always quick with snappy banter, and performed a frantic set. He also made a bunch of great nautical references that really worked in context. 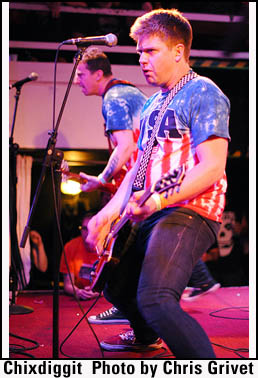 Chixdiggit! started their set by announcing that they would be playing all requests, which prompted a gentleman behind me to yell for them to play “Spanish Fever.” They didn’t play it, which didn’t deter him—he continued to loudly request it after every song ended. Chixdiggit! commenced with a raucous set, playing classics like “Where’s Your Mom?” and “Quit Your Job,” the latter of which they played several times in a row (it was awesome). Despite his best efforts, the set continued on with no sign of this guy’s favorite song being played and I began to feel bad for him. He was quite loud, so I’m pretty sure the band could hear him. At one point, Kepi (who’s also playing bass for Chixdiggit!) made a very “Spanish Fever” specific introduction to a song, something along the lines of “Who’s got Spanish fever tonight?” causing the guy to let out an excited “Woo!” only for singer/guitarist KJ Jansen to then announce a completely different song. I began to really feel for the guy and hoped this would eventually work out for him, as our silent bond of hope was no doubt strengthened by the powers of the sea. Finally, Chixdiggit! launched into “Spanish Fever” and the guy went off for it, dancing and singing along happily. Immediately after the song’s conclusion, the guy quickly made a beeline for the bottom floor of the boat. I assumed he was going to jump off and swim to the shore; he got what he came for. I didn’t notice him around for the rest of the evening.

Towards the end of the set, there was a torrential downpour and I looked around to see if the ghost of Herman Melville had booked the show. I had faith that we would make it back to dry land, with tales of a super fun pop punk party cruise to regale future generations with (or at least to tell people about on Facebook later that night) and everyone continued to enjoy themselves, some possibly contemplating becoming some sort of pop punk musician/sailor hybrid.

The show was a ton of fun. No one had to fight off a giant octopus using guitars and cymbal stands and the ship didn’t sink, so it was a great night, all in all.