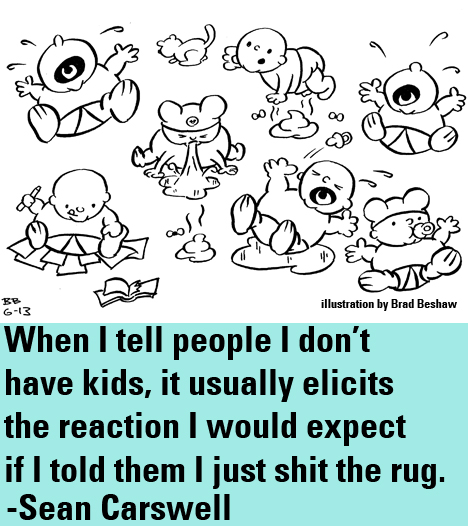 Childfree, A Column That Ran in Razorcake #75: Top Five Reasons Not to Have Kids

This article originally ran in issue #75. Pick it up here if you want the authentic, hand-smudging experience!

Felizon and I were having dinner with a famous author. It was just the three of us. The famous author was the headliner of a literary event; I was on the undercard of said event. The dinner was supposed to be in our honor, but no one seemed to want to talk to us—which was fine with me. I’m a fan of this famous author. I was happy to just hang out with her.

Eventually, the conversation rolled around to children. This happens to Felizon and me all the time. We’ve been married for more than a decade. We got together nearly eighteen years ago. Surely, I should’ve knocked her up by now. Unless something is horribly wrong with us. Unless we’re some kind of mutants. At least that’s the way people tend to act around us when the subject of breeding comes up.
When I tell people I don’t have kids, it usually elicits the reaction I would expect if I told them I just shit the rug.

This case was different. The famous author has also made the choice to not have children. We didn’t ask her why she didn’t have kids. To me, an answer seemed obvious. Her first book hit it big when she was in her late twenties. She spent the next twenty years writing for nearly every major publication, touring incessantly, directing a highly-reputable university writing program, writing a handful of books, and traveling to Paris, Mongolia, Tibet, Iceland, and other places I’d like to go right now. So I didn’t ask the question that always seems to follow the revelation that someone is well into childbearing years and doesn’t have kids: “Why not?”
Felizon told the famous author that she’d written her doctoral dissertation on prejudices against people who choose to not have kids, choose to be “childfree,” as Felizon puts it. We talked about all the questions that tend to follow this revelation: Aren’t you afraid you’ll be sorry when you get older? What if you end up regretting this decision? Are you sure you made the right choice? We discussed the irony that no one asks these exact same questions of people who choose to bring a child into the world, even though they’re the more appropriate people to ask.

The famous author said she’d written an essay on choosing to be childfree. She was reticent about publishing it, though, because she knew it would open up a world of criticism. She knew that, even in the twenty-first century, a professional woman can’t openly say that she’d rather spend her days writing, reading, teaching, headlining author events, and traveling the world than babysitting. And I know she’s right.
She’s at a disadvantage, though. She writes for mainstream publications and sells her books mostly to women (and mostly to women who have had kids). For her to come out and write an essay explaining why she doesn’t want kids would seem like a castigation of all of her fans who have had kids. That’s why I’m calling her “the famous author” instead of using her name. I’ll let her stir up her own trouble.

As for me, I write for this here punk rock magazine. I can get away with saying those things that we can’t say in the twenty-first century. Punk rockers expect it from me. So, with this in mind, I’ve outlined my biggest reasons for not having kids. For those of you who have chosen to have kids, I want to be clear. I’m perfectly okay with you making that decision for yourself. I’m responding here to the people who want to make that decision for me.

So, without further adieu, here are my top five reasons for remaining childfree.

If that kid comes out anything like me, she’s gonna be an obstinate child. She’s gonna want to go against everything I say and everything I do. I’d want her to. If I did choose to breed, I wouldn’t want to raise someone with respect for authority or who does what she’s told. I’d want to raise an independent thinker. And this would bite me in the ass. I’ve already seen this happen to my brother. His son looks and acts hauntingly similar to me when I was his age. He wasn’t even seven before I heard him say to my brother, “I hate you, Dad.” It wouldn’t bode well for my child. The fact that my wife is a punk rocker and perhaps more stubborn and anti-authoritarian than I am would only make matters worse.

I’ve heard all the arguments about how amazing it is to have a kid, about how you don’t really know what love is until you’ve had a child, about how it’s a miracle and whatnot. All of this may be true. I may be missing out on the deepest form of love and skipping the opportunity to create one of the seven billion miracles walking the earth right now. I’m also skipping out on a self-inflicted, 24/7 babysitting job. Which is okay with me. Right now, if someone in my house is crying in the middle of the night, I can sleep right through it. And, perhaps more to the point, no one in my house is crying in the middle of the night. I don’t have to change diapers. Ever. I’ve changed maybe two diapers in my life, and that’s two too many. If you can’t secure your piss and shit, I don’t want you in my house. And, as far as I can tell, this amazing connection I’d get to have with a kid if I had one would mostly entail me sitting somewhere, watching the kid try a million things she’s not supposed to do, and stopping her from doing that. I’m just not into that. 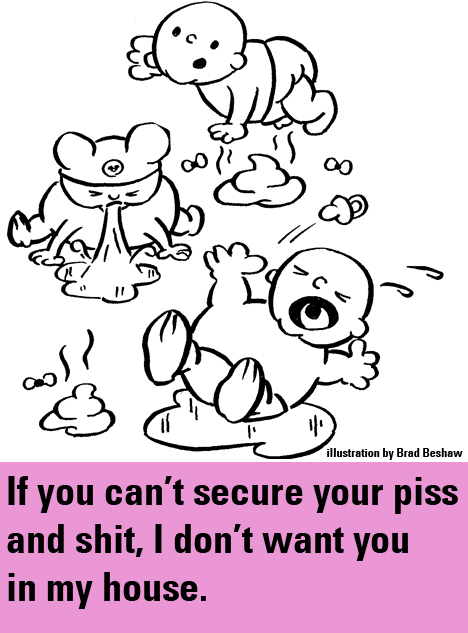 They show you artwork that sucks. I know they’ll get better. When they do, I’ll look at it. Until then, I don’t want to see some stick figures in crayon and act like I’m moved. They play with boring shit like dolls and matchbox cars and video games. It’s good for their imagination, I know. But it’s not good for mine. I’ve moved beyond these things. I’d rather read a novel. Kids listen to shitty music and watch lousy TV shows and movies. By not having one, I don’t have to listen to any Jack Johnson albums. I don’t have to watch the Disney Channel or Nickelodeon. I don’t have to sit through the racist, sexist, classist drivel that passes for kids’ movies these days. I know that the protagonist of the new movie Brave doesn’t want to get married, and I’m supposed to pretend that’s progressive. But isn’t she still a rich, white princess? Shouldn’t we, at some point, move beyond princes and princesses in general? Shouldn’t we think a lot more about the fucked up values these movies teach our kids?
The real answer, I don’t have to care. I’m not gonna watch it. I don’t have any offspring dragging me to it.
This isn’t to say I don’t like kids. I do. I like playing with my nieces and nephews. I especially like it when they’re doing things I like to do, like kicking a soccer ball around or skateboarding. I like spending time with most of my friends’ kids, too. But I also like there to be a limit on the amount of time I spend with kids. After a couple of hours, I typically want to spend the next couple of days with adults.

I have a lot of fun on a daily basis. I play music with friends usually once a week. I get up most mornings and write on novels or short stories or essays or Razorcake columns. I read three or four books a week. I go surfing when there are waves. I still go to the skatepark despite the fact that I claimed, in these very pages, that I was too old to skate when I was six years younger than I am now. I’m one of two people who started this magazine. I started a publishing company and still run it. I have a really interesting job that pays me to research whatever I’m interested in. I travel a lot. I was in San Francisco last weekend, Flagstaff a few weeks ago, and I’m going to the U.K. in August. I get to spend a lot of time with my wife. It’s quality time. We do fun shit that doesn’t include school plays or little league games or telling someone not to eat something he found on the ground. When I’m at home, I can play whatever records I want to listen to. I can play punk rock songs on the ukulele and scream at the top of my lungs and not bother anyone. As far as I can tell, having a kid would mean trading most of this for babysitting duty.

This is the only reason that really matters. I wouldn’t be doing my hypothetical child any favors by bringing him into the world just so I could resent him. Felizon is in the same boat. She has a career she likes. She likes her life without kids. She does a lot of the fun things I just listed and a lot of things that are fun for her. We’re pretty happy as we are. No one needs us to have a kid. The survival of the species doesn’t depend on us breeding.
Again, I don’t mean to attack anyone for having a kid. A lot of my friends and family members have decided to have kids. Almost all of them are good parents. I honor almost all of their decisions. I do know some people who have been pressured into having kids they didn’t want, too. That’s not a good situation. In general, if you don’t want kids, I think you should avoid having them. It’s pretty easy to prevent pregnancies these days. There are enough unwanted kids out there. There’s no need to create another one. There’s no need to feel like you’re being selfish or a dick because you’ve chosen to not have kids.

Sean Carswell is the co-founder of Razorcake/Gorsky Press. His latest novel, Madhouse Fog, is available from fine retailers such as Powell's and Skylight Books.