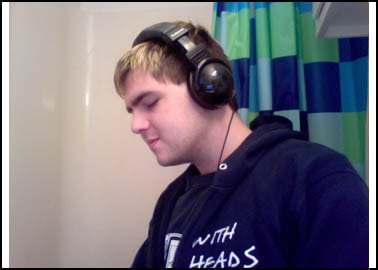 All right, so it’s time for the obligatory decade-in-review column. It’s a bit late, sure, but I needed some distance on the decade before I could decide if it was worth the time it would take to write this out. It turns out that the last ten years weren’t so bad, but I’m sure you’ve already made up your mind about the ‘00s (properly pronounced as the aughties and it’s a shame I only thought of that in ’09). So, instead of summarizing a decade, I’ll tell you why I won’t.

I have a tradition on New Year’s Eve to listen to one final song. I try not to give it too much thought because I feel like planning it too thoroughly would ruin my connection to the music, but 2009 was the end of the decade*. I felt like this was my one last hurrah to give to the decade that taught me how to love music like a fanatic. There’s no way this next decade could be anywhere as good.

Well, actually, let’s hold that thought. I think a similar notion every New Year’s. It started back in my pre-teen years when I first became aware of how much good music was being produced that I had never heard. The simple thought is: “How could I ever create something when my favorite things are that good?” This line of thinking more or less lead to: “How could anyone make something better?” And every year I was proven wrong. Let’s observe the most extreme example…

In 2007, I was convinced that music could never, ever be good again. Remember, this was the year we got The Arrivals’ third album (one of my top ten albums of all time), the Ergs’ second and the Tranzmitors’ first. I still hold oh seven as one of the best years for music I’ve ever been around to experience, but one small side effect that a good year has is to leave you skeptical to all years following. After being thoroughly convinced that music was doomed and my ramblings were useless, I entered the next year with my guard up, expecting 366 days of pure shit. 2008 was a nice kick in the ass for me.

2008 came and brought us not only an Off With Their Heads full length and a Sass Dragons effort, but also the return of Dillinger Four in peak condition. “How could this possibly be topped? Why, this is the greatest year in all of human achievement! This is surely the apex of Homo sapiens as a species! And, what’s more, the decider is out of Washington! How could…?” Okay, I’m going to stop you right there, exaggerated memory of what I assume I said in December 2008, because you were wrong. The momentum didn’t stop there.

Now I stand at the end of the decade, under a barrage of “Best of the Year” and “Best of the Decade” lists to define everything from scientific discoveries to advertising campaigns. There’s nothing wrong with the Best of the Year lists at all, but the decade ones irked me a little bit. No matter how definitive the lists tried to be, they always ended up weighing heavier in the latter half of the decade. It was obvious that the newer years were fresher in peoples’ minds, which caused them to look at the newer efforts more fondly than those of years past.

So, I have a shitty memory? I guess that explains my irrational fear of the New Year. Can one song summarize ten years of my life? The first decade where I can recall the first and last moments? No, of course not. Don’t be stupid. I thought about it with the smallest amount of logic I could muster. The song ended up being the Hold Steady’s “Massive Nights” purely for two measly lines: “We had some massive highs/we had some crushing lows.” I figured that covered all the ground that needed to be covered.

I partied the Old Year away in an empty house with a few friends, listening to bad pop music because the other characters in the crowd didn’t share my taste in noise. A few minutes before the New Years hit, I ducked upstairs into a bathroom to listen to my song without interruption. The event occurred without incident and, like clockwork, when I took off my headphones, I heard from the top of the staircase “—en... Six… Five…” and so forth. The final moments of the arbitrary number to designate the time passed since the year a mythological figure could not have possibly been born in faded away. I then received ten text messages wishing me a happy New Year to various degrees.

2010: Just another number. So what if my band wasn’t around five years ago? So what if my name wasn’t on anyone’s radar until recent history? I’ve got all the time in the world to get caught up. So, fuck year numbers, because my lifetime is still gaining momentum. One day it might crash, but it’s still picking up and I’m cool with that.