Admittedly, I haven’t been the biggest Ceremony fan in the past. That changed in a big way when they made the jump to Matador Records and released Zoo, what I consider their finest album to date. When I heard that Manic Productions would be booking Ceremony at The Space in Hamden, CT, with Living Laser and The Suicide Dolls, I knew I needed to experience what this new direction for the band sounded like live.

New London, CT’s The Suicide Dolls, opened the show. The Dolls are a three-piece comprised of guitar, bass, and drums, with guitarist Brian Albano and bassist Michelle Montavon sharing vocal duties. Albano’s guitar style employs a lot of reverb and plenty of fuzz, with him playing not only some crazy riffs and leads, but also employing slide-guitar techniques to create a wall of noise. Montavon’s chunky bass lines take center-stage in most songs by the Dolls, driving the songs forward with their thunder. Holding everything together is drummer Matt Covey (also of Shai Hulud), who employs some soft mallet techniques in his drum arsenal, and keeps the band moving forward from song to song. With virtually no breaks between songs, the Dolls ripped through an almost half-hour set. I sensed a strong vibe of ‘80s dark wave and ‘90s noise rock in their songs, especially in Albano’s guitar sound, and it gave the Dolls one of the more interesting sounds I’ve heard in awhile. 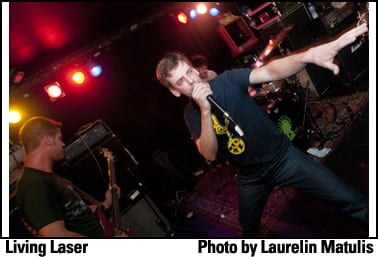 After The Suicide Dolls, Living Laser took the stage, and the crowd packed in for their set. I’d heard some hype about Living Laser, so prior to the show I went online to check out some tracks and enjoyed what I’d heard. Living Laser is a hardcore punk band from Poughkeepsie, NY who has been together for about three years. According to their singer who I spoke with briefly after their set, they started out as a fun side project that turned more serious when their other bands called it quits.

Without much ado, Living Laser quickly began ripping through songs and the crowd went nuts for them. Their songs featured super-catchy riffs including fast, thrashy parts and breakdowns that made everyone in the room want to dance. Added to this mix were vocals which are sung-shouted and not screamed; the result was a band that I’m now very stoked on. Look for a review of their cassette Ragged Glory in a future issue. On stage, Living Laser’s singer gives the band all their stage presence. He leaps through the air and generally goes crazy while simultaneously screaming his lungs out. Overall, I was impressed by Living Laser and can’t wait to check out their new 7” that will be coming out on Trip Machine in the near future. 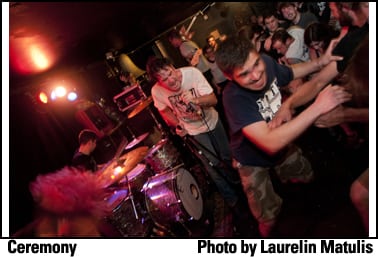 After a short break at the end of Living Laser’s set, it was finally time for Ceremony. Filling in on drums for the band on this tour was Val from Punch and Loma Prieta, who played amazingly, despite having problems with one of his feet requiring wearing a brace. They opened with “Hysteria,” the single from their latest album Zoo, and everyone went nuts. The last time I saw Ceremony was when they opened for Refused at Terminal 5 in New York. Their reception in Hamden, CT was worlds apart from the crossed arms and barely nodding heads they received from the audience at that show. There was not a single person standing idly here, as the band tore through a setlist of seventeen songs from throughout their discography. Crowd favorites included “Open Head,” and “Sick” from the Rohnert Park LP, along with “Citizen,” and “World Blue” from Zoo, among many others.

It might just be me, but it sounds like Ceremony has reinterpreted many of their old favorites when they play them live, giving them the same fuzzed-out vibe as their Zoo tracks. This might simply be the use of different pedal effects than what they’ve employed on previous records, but in any case, it’s a sound that I’m very into.

As the set went on, the crowd began to take over the stage, overwhelming singer Ross, and the rest of the band. One guy had the clever idea to stage dive off the side of the stage, instead of off the front of the stage, into myself and a group of people. In the process, he stepped all over guitarist Anthony Anzaldo’s pedal board set up, unplugging and mangling it beyond hope of quick repair. Anzaldo looked ready to smash the dude over the head with his guitar, but instead plugged directly into his amp and continued to play. His pedal setup was not the only piece of equipment to get thrashed around during the band’s set. The venue’s floor monitors were also knocked about by the enthusiastic crowd.

Towards the end of Ceremony’s set, water began suddenly pouring from the ceiling and ceiling tiles soggy with water disintegrated on the crowd below. Staff attempted to put some buckets down to catch the dripping water, but they lasted until the band resumed playing. Once the next song started, the buckets were quickly scattered by dance floor chaos. The band concluded their set with a mix of favorites including “Repeating the Circle,” “The Doldrums,” and “Kersed,” the last of which is from their album Violence Violence. It was a solid end to a memorable performance. If you have yet to hear Zoo, or to see Ceremony live recently, I strongly suggest you do so. The band is at their absolute best right now, in terms of both sound and performance, and they are not to be missed.

Complete Ceremony Setlist:
Hysteria
Throwing Bricks
Open Head
Citizen
Into the Wayside
Sick
M.C.D.F.
Brace Yourself
The Difference Between Looking and Seeing
Terminal Addiction
He – God – Has Favored Our Undertakings
World Blue
REDC
Repeating the Circle
The Doldrums
I Want to Put This to an End
Kersed

ANDREW JACKSON JIHAD: Only God Can Judge Me: CD