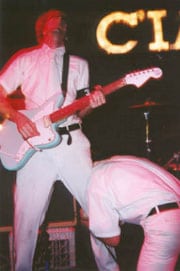 Causey Way, The: at Spaceland By Sean Carswell

I learned some things at the Causey Way show. I learned that they're not a cult. I learned that lead singer/guitarist Causey does not resemble his mentor, David Kuresh, despite what your eyes tell you. I learned that the bassist, Truth, was not in a Robert Palmer video. I saw a glimpse down the Causey Way. It started with recordings of children singing church songs, renditions that sounded like they should've been inserted into the Children of the Corn soundtrack. Then, Summer Causey played a pipe organ intro straight from the songbook of the Metropolitan Missionary Baptist Church. The band filtered out, one by one, each with one arm raised eerily towards the sky in anticipation of their leader, Causey. Then, they're leader came out to get the show started. After a few words that sounded like a cult testimonial, but remember, it's not a cult, they started to rock. And that's the really important thing: that they didn't forget to rock. Amidst the candles, the religious kitsch, the glowing CIA sign (Causey Is Awesome, Causey Is an Asshole, Causey Is Anarchy), the all white uniforms, the go-go boy, and the intermittent Causey sermons, the band never forgot to fuse they're bizarre duel keyboard-fueled, new-wave inspired rock'n'roll. Throughout the crowd, white clad converts swooned. The whole scene made me wonder several things: if Causey is love, why is he so angry? If Causey is truth, then does that make Truth beauty? Does the fact that the Causey Way toured with Man or Astroman? mean that they believe in aliens, and if so, why aren't they wearing Nikes? And what's with that guy in the crowd wearing a hard hat?
Then, the music would sweep me away and I'd forget about it all.
And though the cult is just the Causey Way's schtick, much like being aliens is Man or Astroman's?, the Causey Way pull it off well. Causey's sermons and rants are funny, but they come off as being somewhat spontaneous. He made his band members laugh a few times, anyway. And all of his antics wouldn't have been nearly as funny without two keyboardists acting like loyal converts, the Truth acting like the most supportive preacher's wife since Tammy Faye, the drummer looking like such a wingnut, and the go-go boy looking so brainwashed. It all combined for a good time, and the Causey Way definitely turned playing music into a great show.