The El Rio (http://www.elriosf.com/) touts itself as “Your Neighborhood Dive Bar.” It’s not really in my neighborhood, and I actually don’t find it to be that dive-y, but I like it. For me, one of the nicest aspects of it is the outdoor patio with the larger-than-life painting of what I assume is Carmen Miranda, fruit balanced on her head in all her glory. That, combined with a lemon tree, relatively ample seating and heat lamps, makes for a nice back porch in my opinion.

I’ve also seen some fun shows there. On the Saturday in question the line up was heavily gothic, with the VacantChurches, Swann Danger, and The Holy Kiss.

Vacant Churches (http://www.myspace.com/vacantchurches) didn’t really do much for me. Although totally proficient, they seemed a little uninspired. Their sound was of the gothic punk variety (back when I was a wee lass, we called it death rock, but I think people don’t really say that anymore). I didn’t find the singer to be very engaging and her voice didn’t excite me. I couldn’t hear the keyboards very much and the rhythm guitar was just not very fresh. They certainly weren’t bad but I didn’t find myself getting very enthusiastic about their set. I decided to go back outside.

Once there, I realized that the club next door had a live band as well. It was some kind of Latin, Santana-type of band and the vocals were crystal clear – much louder than Vacant Churches, even though they were a lot closer. This became quite a source of amusement to me. It seemed very funny to go from Vacant Churches, with their black clothing, striped stockings, pointy boots, leather vests and jackets (with Broken Bones painted on the back) and (anti) religious paraphernalia, to some guy saying, “How many people watched the 49er’s game today?” and then launching into a song whereupon he sang, “I got holes in my pockets, I got holes in both my shoes.” It was a duel between pseudo (we’re not talkin’ hardcore here) breakneck punk drums and bongo mania.

It just seemed so funny to me.

I went back inside for a little while and the bartender offered me a shot on the house to make up for the dueling genres. When I went back out again, the guy next door was singing, “Speeeeciiiiaaaal laaaaaady” and dorky gothic guys were trying to dance in what seemed to be an “I’m being ironic” kind of way (which I considered to be quite silly, as the music was nothing if not genuinely dancey). Very amusing! Inside Vacant Churches had finished and someone had put some old Metallica on the jukebox.

The next band up was Swann Danger (http://www.myspace.com/swanndanger) from Oakland. I really liked them. The singer had a strong, arresting voice and was clearly influenced by Siouxsie Sioux (if I hadn’t managed to figure it out on my own, there was a sticker on her guitar to help me). The music was pretty sparse (three piece band) and seemed prone to simple guitar rhythms and/or moody, dark effects. The bass reminded me of Jaws, heavy-duty, and the bassist messed around with a sampler as well. The drums, at times, recalled The Cure’s “The Hanging Garden” or “A Forest.” Most of the songs weren’t very fast but they picked up sometimes. I loved the last song, “Hit the Bricks,” which made me think of “Atomic Bongos” (Lydia Lunch, Queen of Siam) a little. 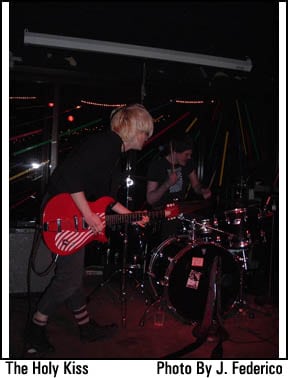 After Swann Danger I went next door to use the ATM there and this guy was singing “Return to Sender” on karaoke. When I came back and was waiting for the loo, Bob Dylan was playing. It was such an interesting night of music!

San Francisco’s The Holy Kiss (theholykiss.net ) played last. I like them a lot. Last time I’d seen them was with The Starvations and it was a great show. Nick Cave’s influence on the singer is apparent within about five seconds (and is pretty easy to figure out before the band even starts due to the singer’s Nick-Cave-Birthday-Party-era hair), and they’re apparently on the Release The Bats label, but I don’t think he does Mr. Cave a disservice nor do I find him to be completely lacking in his own persona, which would make it lame. He really gets into it and I dig that. Plus, his voice (while strong) isn’t as deep as NickCave’s, so he actually sounds different and I think that’s good. The guitar has this gorgeous bluesy gothic swampy reverberating sound that I love; kinda Crime And The City Solution maybe. The drummer is solid and keeps things interesting and the bass is rich and lovely (plus, the bassist has a fancy mustache). The crowd, though not many (I got the impression people were already out of town for the holidays?), was into them and they sounded good.

A great way to complete an interesting and varied night of music!