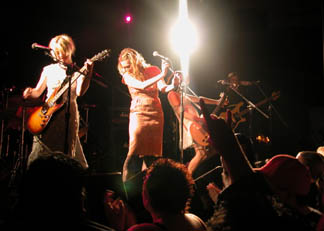 ...But This Time a Little More Dirty: An Interview with Rocket By Brian

Quick, before I get labeled as the guy that only writes about Boston bands, check this out: Rocket are five young ladies from the Los Angeles area who record for the premier bubblegum label of our time, Teenacide Records. Their sound is a sort of fuzzed out, sped up version of the Shangri-Las. Their first record for Teenacide (Too Hot To Be Bothered) was a low-budget homage to summertime AM radio, and really captured that compressed, transistor radio sound. On that record, the girls sang, with Teenacide mogul Jim Freek and his friends supplying the musical backing. This time, on the brand new EP Girls with Candy Hearts they play their own instruments, and branch out a bit into songs about falling in love at Guitar Center and about only dating guys in the 818 area code. It's still plenty sugary, but the sound is a bit bigger and edgier. Here's my conversation with Lauren White, lead vocalist: